At about 2 a.m. this morning Kamenetz awoke feeling ill and was transported to the hospital, where doctors pronounced him dead at 3:22 a.m., according to a county police statement.

Kamenetz, a former prosecutor for the Baltimore City State’s Attorney’s Office, was elected to County Council’s District 2 in 1994, serving four terms representing a diverse district that at the time included Randallstown and Pikesville.

He then ran a successful campaign for county executive in 2010, following the departure of two-term County Executive James T. Smith. Kamenetz was in his second term and ramping up a campaign for governor against Republican incumbent Larry Hogan.

A real hometown boy, Kamenetz never strayed too far from his Baltimore County roots. Born in Lochearn, he attended Baltimore County public schools, the Gilman School and the Johns Hopkins University, where he earned a B.A. in 1979. He earned his law degree from University of Baltimore School of Law in 1982 and was admitted to the Maryland Bar the same year.

As a young mustachioed county councilman, Kamenetz could often seem serious and at times gruff, but when elected county executive he seemed to blossom and become more gregarious and content in his countywide role.

Marc B. Terrill, president and CEO of The Associated: Jewish Community Federation of Baltimore, called Kamenetz’s death a shock. 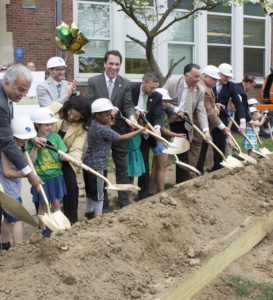 Kamenetz at the May 4 groundbreaking for the new Dundalk Elementary School. (Baltimore County photo)

“Kevin’s passing is incredibly shocking, tragic and so profoundly sad,” Terrill said. “He had accomplished so much as a family man, community builder, politician and leader.  Kevin Kaminetz’s legacy will be felt for many years but the tragedy of this loss is incalculable.”

Howard Libit, executive director of the Baltimore Jewish Council, has known Kamenetz for decades, since Kamenetz was first elected to the County Council in the mid-1990s, and counts him as not just a colleague, but a friend.

“I’ve always known him to be a passionate and dedicated public servant who was really committed to advocating on behalf of Baltimore County and Baltimore City and the state of Maryland,” Libit said.

Libit recalled Kamenetz urging Baltimore County residents to patronize Baltimore City restaurants and businesses in the wake of the unrest in Baltimore following the death of Freddie Gray.

“It was really important for him to see not just Baltimore County succeed, but Baltimore City and the region succeed,” Libit said. “That meant a lot when I was working in the city, and it meant a lot as someone who just cares for the community.”

During his work at the BJC, Libit said he appreciated Kamenetz’s support of anti-BDS legislation in the General Assembly and for supporting the faith community when county synagogues and other religious institutions were impacted by a new storm water fee a few years ago.

“He and his administration were helpful in trying to work through it to insure it would be affordable so [the fees] were reasonable. That meant a lot,” recalled Libit. 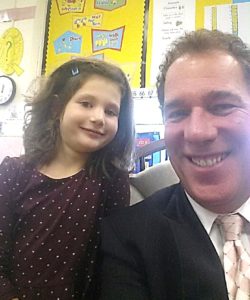 But beyond the civic and political, Libit remembered Kamenetz as warm, personal and even funny. He recalled Kamenetz taking a selfie with Libit’s daughter after a chance meeting when he came to read to her Rodgers Forge Elementary School class.

“He texted it to me and I’ve kept that photo and I reposted it on Facebook this morning,” Libit said on Thursday. “That was a memory that I wanted to have of him.”

“I know sometimes he could come off as an administrator in his role of government leader and everything, but personally, he could be a really warm and very funny person,” he added. “Those little things are what I’m going to miss the most, the part that’s the most emotionally upsetting today.”

Thursday morning was also difficult for Vicki Almond, who was elected to the county council seat Kamenetz left when he moved into the county executive’s office. Almond has known Kamenetz since her community activist days prior to her election to the council.

“I am still in disbelief. I truly am. I am shocked, I am stunned. I am terrified for his family,” Almond said. “He was always willing to talk to me. He was willing to hear me out. I could be pretty opinionated about things. We had some lively discussions and obviously we didn’t agree all the time, but I usually had his ear and I was always grateful for that.”

Almond said Kamenetz was a great supporter of the Main Street projects in Reisterstown and Pikesville and would always show up when invited to events in the 2nd District when Almond joined the council. 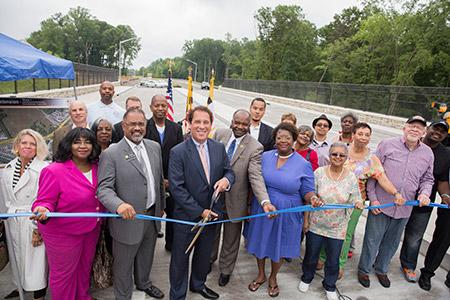 Kamenetz marked the opening of a new 1.2-mile section of Owings Mills Boulevard at a ribbon cutting in June of 2016. (Photo provided)

“I know he still felt very close still to the 2nd district,” she said.

And although Almond and the council often butted heads with Kamenetz, she said there was always mutual respect.

“We certainly had our moments, our discussions,” she recalled. “We’re certainly different people, we thought differently, but I’d like to think it was mutual respect.”

Almond, who is running for county executive in the upcoming 2018 election, said she is suspending campaign activities out of respect for Kamenetz and his family.

Kamenetz is survived by his wife Jill and two sons.