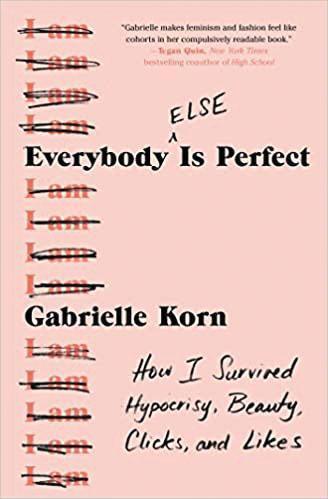 “Everybody (Else) Is Perfect:
How I Survived Hypocrisy, Beauty, Clicks, and Likes”
Gabrielle Korn
Atria Books

When Gabrielle Korn was a Jewish teenager growing up on Long Island, fashion fell into two categories. Korn and her peers could be either Jewish American Princesses, clad in velour sweatsuits and Tiffany jewelry, or emo kids in black hoodies and Converse sneakers. She fell somewhere in the middle and put together outfits consisting of bat mitzvah jewelry layered over band T-shirts or dresses with combat boots.

In her essay collection “Everybody (Else) Is Perfect: How I Survived Hypocrisy, Beauty, Clicks, and Likes,” the former editor-in-chief of Nylon chronicles her journey to the upper echelons of fashion and beauty media. She also details her fight to use her role to make the industry more inclusive to people of different races, genders, sexual orientations and body sizes.

Korn balances accounts of the misogyny and homophobia she encounters as an out lesbian in a largely straight workforce with her awareness of the privilege that allows her to obtain positions of influence in a system rooted in white supremacist beauty standards.

“I understood that as a white Jewish lesbian, the parts of my identity that might marginalize me were largely invisible; I was benefiting from the system while being tokenized by it,” she writes.

Toxicity in the fashion and media industries is often played for laughs in pop culture — think “The Devil Wears Prada” or even “Zoolander” — but Korn articulates the deeply personal and disturbing toll of a workplace that glorifies impossible beauty standards. She battles anorexia for years amid peers who compliment her dangerous weight loss (she weighs around 100 pounds at her lightest and sickest), promote unhealthy fad diets and issue passive-aggressive judgments if she dares to eat a bagel.

Korn is also the grandchild of Holocaust survivors and writes about how she first learned about the atrocity from her parents’ explanations of her grandmother’s hurtful behavior, like telling Korn she was ugly to “ward off the evil eye.” A link between trauma and outward appearances is established early in her childhood, and the pattern reproduces viciously in the fashion world, where constant insecurity is weaponized against workers and eating disorders are common.

The title of the book comes from another toxic phenomenon Korn identifies: how often women are willing to declare other women beautiful while privately tormenting themselves over perceived flaws. Even as brands push “woke” lifestyles and people become increasingly willing to support body diversity and empowerment for others, many remain incapable of embracing themselves.

Korn is bracingly honest about her struggles to find meaningful work and healthy relationships in her industry’s vortex of image obsession and personal branding. Even more intriguing are her abilities as a cultural commentator; in one essay, she successfully ties the restrictive skinny jeans trend of the early ’00s to the politics of the Bush administration.

Reading the book during an unprecedented health and economic crisis makes it difficult to sympathize with her stories of six-figure salary negotiations and attending fashion week, but her grueling quest for inclusivity and self-acceptance in an industry built on exclusion forms the basis of a book that is both compelling memoir and haunting exposé.