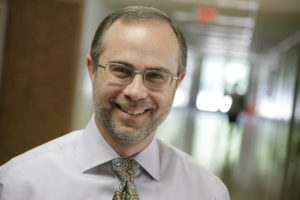 Melvin J. Berman Hebrew Academy in Rockville was in rough shape in 2006. The school’s enrollment had dropped, and it didn’t have the budget for an executive director position, so lay leaders were running the school day-to-day. Headmaster William Altshul was leaving to make aliyah.

“We needed a leader who would be able to come in and take the reins in a purposeful way,” said Behnam Dayanim, a former president who was a leader at the time.

Ten years later, Joshua Levisohn, the headmaster the school hired in Altshul’s place and whom parents credit with turning around the modern Orthodox day school, has decided to step down in June 2018.

“Twelve years is a long time to be a head of school,” Levisohn said when asked why he plans to leave. “I don’t think there is one perfect time [to leave]. It’s a more of a feeling for when you want to do something different.”
Levisohn, 49, said he’s giving notice a year and a half before he steps down because he doesn’t want to hide his job search and because the school may need that much time to find his successor.

Members of the Berman community contacted for this story praised Levisohn as a respected leader.
Levisohn “has been instrumental in helping to shape the school that we have today,” said Dayanim.

Dayanim said Levisohn increased the school’s focus on science, technology, engineering and mathematics, as well as differentiated learning, an educational philosophy that has teachers tailor instruction to a student’s ability.

School President Orlee Turitz praised Levisohn for rallying the students together as a community, such as when the upper school visits Israel.

“He makes every child in the room brim with excitement over the” departure, she said. He connects “everyone together in a community and [makes] each one feel like they are participating in their own way in this mission.”

Many parents took to social media last week to wish Levisohn well and express gratitude for his work.

“Thank you so much for all you have done for the school. Your hard work and dedication to everything Berman is greatly appreciated. You will be missed,” wrote Sara Klein Glashofer.

Another post by Levisohn includes a video of the school’s fifth-grade students playing musical instruments.
Debra Panitch, a parent of two Berman students and one graduate, said that she always sees him at school.

In a letter to the community, Turitz said the school will form a search committee to find a new headmaster. Levisohn said he will not be involved in the search, although he will help with the transition.

Asked about his plans, Levisohn was not specific. He said he is pursuing options “having to do with developing educational leaders at all levels,” and added that he would prefer to stay in the Washington area.
Jonathan Cannon has walked in Levisohn’s shoes.

Cannon stepped down in 2013 as head of school at Charles E. Smith Jewish Day School in Rockville, also ending a 12-year tenure.

Cannon and others said the next step for a resigning head of school can include consulting, mentoring other educational professionals, joining a national organization such as Hillel International or leading another school.

Levisohn will not be the only one in his family who will leave Berman in 2018.