Writing an opera on the history of Hawaii is a bold endeavor as it explores a history and culture less familiar to us, yet of significance and growing importance.

But that is what Luna Pearl Wolff, a gifted, dedicated composer, has done. Attracting attention with her compositions and her label, Oxingale Records, she has written an effective exploration, in operatic form, of the conflict and troubled history of Hawaii’s monarchy and American 19th century expansionism in Better Gods. (As an aside, she is married to the Israeli cellist Matt Haimovitz, considered to be among the best cellists of his generation.)

The opera, with libretto by Caitlin Vincent, received its world premiere Jan. 9 at the Kennedy Center through the Washington National Opera’s American Opera Initiative and the Domingo-Cafritz Young Artists Program.

In our own singing of the Torah, prayer chants and folk music, we have the seeds of a vast musical culture which nourishes us spiritually and is a well for creative music.

Similarly, in Better Gods, native songs and instruments as well as the Hawaiian language work together to form essential pre-Western influences contrasted with Western music. These types of root elements are the source of operatic inspiration throughout the history of operatic form.

For example, singing the Torah trope to the biblical creation story sets in motion one of our most important weekly Jewish rituals. The “Creation Chant,” or “Kumulipo,” is a Hawaiian chant that describes the creation of the world over the course of a single cosmic night. In this legend, creation begins in the night. (This parallels “and there was evening and there was morning, the first day” found in Genesis). The translator of this chant, was Queen Lili’uokalani, during her imprisonment at Iolani Palace in 1897.

The health of a culture is mirrored in its arts, and art reveals the difficulties as well as the triumphs of civilizations.

In the opera Madame Butterfly, Pinkerton, sings out “America Forever,” contrasting the irony of his racial and cultural attitudes, taking whatever he wants (including a child) regardless of the emotional consequences for Cio-Cio-san (Butterfly) or the child, and within the culture of Japan.

A similar idea which is critical of historic actions is presented in Better Gods, yet it is not handled as well. There is no similar moment when we are so moved in this work despite its emotional tone. It needs memorable arias.

The set was beautifully arranged with a horizontal island painting, framed in a white coral frame, with brilliant color and subtle lighting. It was positioned so that its perspective, along with its placement behind a scrim, gave us Hawaii as a presence as a character in the work. The two modular stages on both sides were occupied by percussionist, and native singer with bamboo and gourd instruments. The middle ground upstage had royal thrones, surrounded by eight giant red tassels. This was a minimal yet very effective stage set.

Six outstanding voices, with fine acting technique to match, were given excellent direction. I could not remember being more satisfied with a collection of talent since the days when the Metropolitan Opera ran the Metropolitan Opera Studio under the direction of John Gutman. That studio produced several generations of America’s finest singers, and in Better Gods current members of Domingo-Cafritz delivered a performance of total vocal and dramatic commitment.

The music by Wolff demonstrated a search for authentic Hawaiian chant and island instruments including the nose flute, warrior sticks and stone castanets. The effective use of these instruments represented a reach to pre-Western influence, even as we had a Western orchestra juxtaposed in this clash of cultures.

The librettist, while designing a text from history mixed with Hawaiian chant, delivered mixed results with too many repetitions of words which did not add to the forward flow. However to be fair, too much of the history was required to make a more effective drama. Given the time limit (75 minutes), Vincent did wonders.

Most outstanding, in the role of Lili’uokalani, was mezzo-soprano, Darryl Freedman as the queen. She delivered remarkable singing and musicianship of the highest caliber along with a convincing and regal portrayal of the last Hawaiian monarch.

Rexford Tester (Lorrin Thurston) was effective as a self-serving man of great influence, managing to bring in the Marines to take over Hawaii while demanding the abdication of the queen. Wolff’s writing of this music for tenor in baroque style did not convince me that this was a good choice over having a leitmotif for the character consistent with the music in the other voices.

Ariana Wehr (Kahua) sang with a shimmering soprano sound coupled with movement reflecting Hawaiian dance. Her portrayal was subtle and feminine. During her brief dance interlude, we were reminded of the spiritual and peaceful nature of Hawaiian culture.

Bass singer Wu Wei gave a strong performance as Robert Wilcox and made a fine impression as a warrior and percussionist. Having sung worldwide, he was also a Metropolitan Opera Auditions finalist.

The direction by Ethan McSweeny was clear and precise (WNO directing debut), and the conductor, Timothy Myers, drew together the many special elements of the orchestra for a performance which never faltered in support of the drama. Both artists are a welcome find for the Washington National Opera.

The artistic and design team, including Vicki Holt Takamine, a native of Hawaii, added authenticity to the dance and movement in this work, as well as a believable setting.

At the performance, an announcement was made that the Honolulu Opera at the Hawaii Opera Theater turned down a chance to perform Better Gods. It should reconsider. 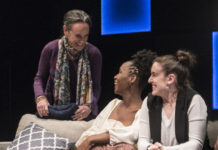