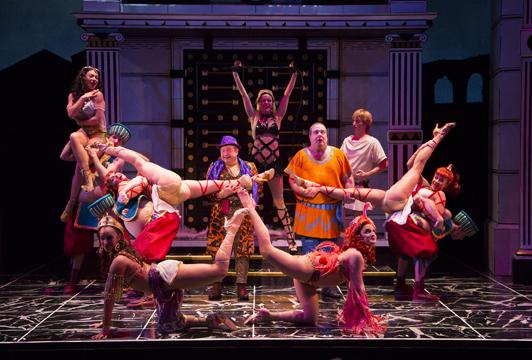 A funny thing happened on the way to Alan Paul’s acting career.

Growing up in Potomac, he participated in the plays and musicals at Churchill High School and went on to study theater at Northwestern University in Chicago. “I wanted to be an actor. I was a singer,” he said.

Then in his senior year at college, he directed a play and his fate was sealed. Acting was fun, but as a director he got to see how his ideas could change things. “You use actors and design to make people think,” he said. Once he experienced that power, there was no going back.

Now, at only 29 years old, Paul just finished directing his first major production for the Shakespeare Theatre Company in D.C. He received great reviews in area papers for his work with A Funny Thing Happened on the Way to the Forum, which ran Nov. 21-Jan. 5 at Sidney Harman Hall in D.C.

After graduating college in 2006, Paul was given a fellowship in directing at the theater company and has been there ever since. He is associate director now, involved in all things artistic and works under Michael Kahn, the company’s artistic director.

Kahn handed over the directing reigns to Paul for the company’s A Funny Thing Happened on the Way to the Forum, a comedy inspired by the works of the ancient Roman playwright Plautus and made into a musical by Stephen Sondheim. The show is a farce, filled with typical Shakespearean themes of mistaken identity, men disguising themselves as women and an intricate plot.

Paul took an already-funny show and made it a laugh-a-minute performance. Giving his leading actors some freedom, the show managed even to get in a jab or two at the television show Duck Dynasty. But clearly Paul’s own directing hand could be found in the many extra beats and dance steps by soldiers, a motorized driveable shopping cart and the timing of many lines.

Paul, who lives in Logan Circle, viewed his job as a simple one. “Let the audience have a great time. Fun can not be undervalued. People need an escape,” he said in an interview two days before the show’s closing.

Forum “is from the tradition of vaudeville and burlesque. I kept that. There is a certain rhythm. To fight against it is at your own peril,” he explained, adding he was thrilled to have his first major directorial debut come in the form of “a big splashy show.”

He is incredibly appreciative that he was handed the responsibility of directing a major production in the D.C area. Besides making the show a hit, he was responsible for a lot of money and the knowledge “of all the things that can go wrong.”

Kahn clearly was pleased with his young protege. In the beginning of the playbill, Kahn wrote in his column about Paul’s main-stage directing debut, noting that “Alan’s sense of comedy and timing and his boundless enthusiasm for musical theatre make him the perfect director for this production. I have great faith that this is only the beginning of a long, successful directing career for Alan.”

It’s not just musical theater that Paul wants to direct, although he said he greatly respects actors who can sing, dance, deliver their lines and be in right place at the right time, all at once. Overall, he just loves being involved in theater. “I like variety. I like Shakespeare. I love drama,” and he loves being involved in something that starts off nebulous and within four or five weeks is ready for the real stage and an audience.

His career goal had been to direct a major show and now with Forum under his belt, his goal has changed slightly. “Now I want to do two,” he declared. “I am a director. I have a whole list of dream projects.”

For at least the present, he plans to stay in D.C. “It’s big enough that it is an important theater town, but small enough that you can make your way.” Also, he noted, unlike many cities, “People go to the theatre here.”

As a director he is totally involved up until showtime. He then takes a backseat, only attending performances every 10 days or so to see if any changes are needed. With Forum, he was also there to remind everyone to speed it up. “It can never be fast enough for me. It’s a farce,” he declared.

While he may not attend every performance, his ties to this area — including his parents who still live in Potomac and feed him a nice weekly Sunday meal, and his former school friends and teachers both at Churchill Hill and Congregation Har Shalom — guarantee he will meet someone either before or after a performance. “You feel like you are the constant host.”

Although he used to love acting, Paul doesn’t miss being on stage. “It takes a lot of discipline to be on the stage eight hours a day, six days a week. It’s physically demanding. I am more suited for the intellect and management part of it.”

But don’t think Paul isn’t working those hours and more as a director. Still, he is running again. “I forgot for a long time there was such a thing as hobbies,” he said. He also enjoys playing piano and going to movies. He actually prefers attending movies where he just relaxes and enjoys himself, rather than going to the theater where he finds himself making little changes to whatever is going on.

“Movies are just an escape. I am ignorant of what goes on so I do not direct them.”