Passover lasts for eight days. Most people only do one, or maybe two seders, but if you strictly observe the holiday, that still leaves six chametz-free dinners to deliver.

Given that seders tend to be rather substantial, multicourse meals, there may be an appetite for lighter fare on the remaining nights, while still adhering to the rules. In addition, cooks may crave a break after the effort it takes to host a seder, even if the gathering is smaller than usual. The following recipes are designed with that in mind.

This dish marries two superfoods — both of these veggies perpetually appear on those lists of things that we’re supposed to consume in vast quantities for optimal health. The preparation here is simple, healthy and colorful. It can be a light meal on its own, or it can be a spectacular and substantial side dish.

I used the Swiss chard that is tinged with red — the rainbow, or regular green variety would work just fine, as would any other green such as kale, spinach, collards or escarole. Be sure to adjust the cooking time; spinach cooks quickly, while kale and collards need a longer time in the pan.

Heat your oven to 350 degrees. Prick the sweet potatoes, place them on foil or a baking tray to catch the drippings, and place them in the oven. Bake for about 45-60 minutes until they are completely soft.

When the sweet potatoes are almost done, heat the oil in a skillet and sauté the scallions with salt and pepper until fragrant. Add the Swiss chard and cook, stirring frequently, until done, about 6 minutes. Slice the sweet potatoes in half, and spoon the cooked greens onto the cut sides of the sweet potatoes, mashing slightly to mix. Serve immediately.

I discovered this method for cooking eggs years ago. It has a lot going for it, with no added fat, a fluffy, soft texture, quick cooking and minimal mess.

The downside is that it does not lend itself to a large batch, but in these times of small gatherings, a dinner a deux is more likely what is required. I generally drain the eggs in a strainer or large slotted spoon, then give them a couple of dabs with paper towels to absorb the additional wetness, but if this doesn’t bother you, just lift them out of the pan with a slotted spoon and plate them.

This version is the most basic — salt and pepper — but you can get creative and add other seasonings to the eggs before cooking, or toss fresh herbs or cheese on top after plating.

4 eggs
Pinches of salt and pepper

Fill a medium-sized saucepan two-thirds of the way with water, add a pinch of salt and bring it to a boil. Crack the eggs into a small bowl and whisk them vigorously until they get fluffy.

When the water boils, pour the eggs carefully into the pan and cover them. Cook for 1 minute. When the eggs are done, remove them from the pan, either with a large slotted spoon or by pouring them through a strainer. Season as desired, and serve immediately.

Cream of Whatever Soup

This soup offers a basic preparation for any vegetable(s) you have on hand. It can be used for everything from asparagus to zucchini, broccoli, butternut squash, carrot, cauliflower, potato or a combination thereof.

If you like a uniform, smooth texture, puree the soup. If you are fine with chunks, leave it be.

Just cut them small enough during prep so they fit easily on a soup spoon: No huge broccoli florets, please.

Not into dairy? Skip it.

Prefer yogurt to cream? Swirl it in.

This is not so much a recipe as a framework for a simple and satisfying soup. If you feel like spicing things up, add a few cloves of crushed garlic with the onion sauté, some dried or fresh herbs, some lemon or lime zest, a teaspoon of curry powder or a sprinkle of cayenne pepper.

In a large pot, heat the oil and sauté the onions with salt and pepper until fragrant. Add the vegetables and sauté until they are coated and shiny. Add the broth, bring it to a boil, then lower the heat, cover and simmer for about 30 minutes until the vegetables are soft.

Note: Things like asparagus and tomatoes will cook faster than potatoes and butternut squash; use a fork over a timer to decide when soup is done. If desired, puree the soup; if not desired, don’t. 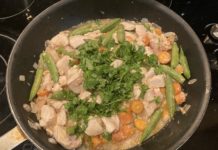 A taste of Chinese San Francisco from your kitchen 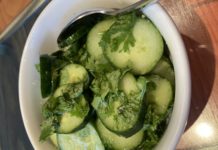 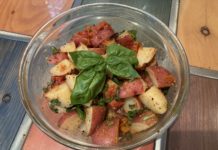 A twist on caprese