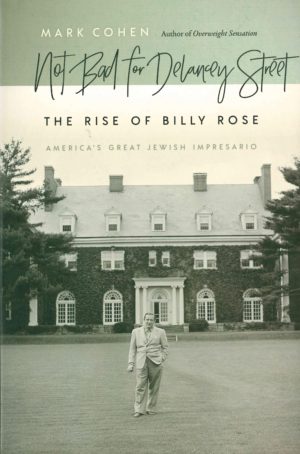 If anything, Billy Rose was versatile.

Among his many talents was songwriting. As a composer, Rose penned a few hits, including “Tonight You Belong to Me,” “Me and My Shadow,” and “More Than You Know.”

But Rose was not like typical songwriters who were often emotional, sentimental and impulsive. Instead, he was methodical and a hard worker, writes biographer Mark Cohen in “Not Bad for Delancey Street: The Rise of Billy Rose, America’s Great Jewish Impresario.”

He also was a syndicated columnist. His column, “Pitching Horseshoes,” appeared in newspapers around the country.

And he was New York’s nightclub and theatrical restaurant king, who owned the Fifth Avenue Club, Casino de Paree, Billy Rose’s Music Hall and the Diamond Horseshoe, among others.

He was a producer, staging many plays, notably “Carmen Jones,” and spectacles — including Aquacade — a swimming exhibition at the 1939 World’s Fair.

But the three facets of Rose that warrant a biography are his Horatio Alger climb from poverty to riches; his understanding of what appealed to people, making him the greatest showman of his age; and his philanthropy and fundraising that led to the establishment of the Billy Rose Sculpture Garden in Jerusalem.

He grew up extremely poor. His mother, Fannie Wernick, was a dynamo; his father, David Rosenberg, writes Cohen, “contributed the humiliations of poverty and the example of failure that outfitted Rose with what American billionaire Larry Ellison called ‘all the disadvantages for success.’ ”

By the time he died in 1966, Rose was a millionaire many times over.

That steep climb came at a price. Rose was considered sleazy, even a bit crooked, the author writes.

“The widow of a Rose employee said, ‘Likable, shmikable, he was a very gifted man. … He was a barracuda.”

But it was his showmanship that most distinguished him. He was bold, bordering on shocking, unafraid of controversy, and seemed to have an innate sense of what the public wanted to see.

Dancer Betsy Blair described his Diamond Horseshoe club: “Near the entrance across the whole width of the room was a Gay Nineties-type bar, brass railed and mirrored. The walls were red velvet. There were crystal chandeliers. At the far end, was the proscenium stage, with a horseshoe-shaped runway coming out of it. The inside of the horseshoe lowered between shows to become a dance floor.”

His Billy Rose’s Music Hall, said journalist Lucius Beebe, was “a monument to lunacy … in a class by itself.” It was “a madhouse of gayety … chaotic revelry in a strange combination of Mardi Gras-Beaux Arts Ball-Coney Island atmosphere.”

The venue boasted 100 singing waiters who were dressed as mobsters, and “gaudy nudes.” It featured free dances with young women “who came as close to illegal solicitation as the law allowed.”

Rose’s most enduring monument is a sculpture garden on the grounds of the Israel Museum in Jerusalem. He donated 50 sculptures and paid for the garden in which to display them, with the total gift for the five-acre Billy Rose Sculpture Garden coming in at $1 million. Rose also raised money for the project and helped with publicity.

Yet Rose was ambivalent toward his Jewish heritage. Early on, he changed his name from Robert Rosenberg to avoid a Jewish-sounding name that might hamper his career.

In the 1930s, he rescued an Austrian Jew, Kurt Schwarz, who was living in Italy, from the Nazis. But Rose didn’t help him stay in the United States when he arrived on his way to Cuba. And he took no public credit, apparently fearing that spotlighting his Jewishness in that way might hurt him personally and professionally.

Rose allied himself with the Bergson Group, Revisionist Zionists in the United States, to raise money for a Jewish army in pre-Israel Palestine. Those men favored the militaristic outlook of the Palestinian yishuv, at variance with a more liberal vision of the future Jewish state held by many American Jews.
The great extrovert and showman’s shyness when it came to his Jewish background was not unusual, Cohen stresses.

In the middle years of the 20th century, he writes, Jews were not completely accepted as Americans and were attacked by isolationists for trying to get the country into the war. “A Jewish American identity that allowed Jews to embrace both sides of the identity’s equation, and allowed non-Jews to accept it, was still to be achieved.”

The author does chronicle Rose’s shortcomings, but in the end, is clearly in the showman’s corner.

He wrote: “Billy Rose, with all his flaws and pettiness and occasional brutality, is Bellarosa or bella rosa, ‘beautiful rose.’ He met the challenges of American Jewish life on both fronts with all the intensity and joy and enthusiasm and caginess and wariness and toughness that his dual inheritances encouraged and required.”

Not bad for a poor Jewish kid from Delancey Street.