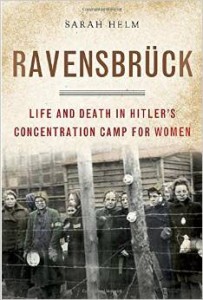 Welcome to hell on earth.

This Nazi nightmare was called Ravensbruck, a slave labor camp for women. The prisoners worked and lived in unspeakable conditions, were fed almost nothing and abused by their guards. When they became “useless mouths” (Nazispeak for those unable to work), they were gassed, shot or sent into the cold, naked, to freeze.

Most of the inmates were women the Nazis considered troublemakers or potential troublemakers – socialists, communists, anti-Nazi community leaders. Then, there were the “asocials” – prostitutes, lesbians, beggars, petty criminals; gypsies; and Jehovah’s Witnesses who questioned the Fuhrer’s divinity.

Jewish women were there early, before the Germans decided on the Final Solution. They were treated worse than the other groups, but not murdered, until they were sent to the death camps in 1942.

Between then and 1945, the only Jewish women there were those passing as Christians. There was no gender-related test to reveal which women were Jewish as there was with men. As the war came to an end, the Nazis were running out of slave laborers. As a result, some of the Jewish women at Auschwitz and elsewhere were temporarily spared the gas chamber so they could work at a war industry site.

Ravensbruck opened in 1939 and was originally built on about six acres, writes author Sarah Helm. It had no watchtowers, but an electric fence made escape highly unlikely. At first, most of its prisoners were anti-Nazi Germans, but later many women from countries conquered by Germany became inmates. The camp housed some 130,000 women during its six-year existence, including some 8,000 French prisoners, 1,000 Dutch, 18,000 Russians and 40,000 Poles. Estimates of the death toll range from 30,000 to 90,000.

Like a good historian, the author, a journalist by training, lets the reader know what is going on of importance outside the concentration camp.  But the book focuses on the lives of some of the prisoners and a handful of the guards. Perhaps in an effort to restore their humanity, the prisoners, after being introduced with their full names, are referred to by their first names.

Not much evidence exists from the camp itself, as the Nazis burned the women’s files during the final days before it was liberated by the Soviets. From letters written from inside the camp, from memoirs – published and unpublished – and from many interviews with camp survivors and their descendants, Helm reveals the secrets of this lesser-known Nazi prison.

As brutal and inhumane as the Nazis designed Ravensbruck to be, the Nazis could not extinguish the humanity of many prisoners.

Take, for example, Yevgenia Lazarevna Klemm, a teacher from Odessa. She told her fellow prisoners during their long march to Ravensbruck: “You’ll be all right. You are Red Army girls. We are prisoners of war. Remember that.”

Once in the camp, she encouraged them to remain united and “to keep clean and tidy.”

A woman Helm met in 2008 outside the camp who refused to identify herself said of Klemm: “She is the reason we survived.”

Among the bravest of the camp’s inmates were the German members of Jehovah’s Witnesses. All prisoners were subject to beatings by guards, but the members of that religious sect received especially gruesome punishments. The Jehovah’s Witnesses were willing to work, but refused to make arms or munitions for the war. For their obstinacy, they were forced to stand in the ice and snow for hours.

When that torture failed, they were locked inside a stone bunker in total darkness with no food. But still, none agreed to work in the war effort.

Eventually, they won and were employed in other kinds of work, including cleaning SS members’ residences.

One of the most vile characters in the camp was the head physician of the Revier (the camp clinic), Dr. Walter Sonntag. He was a sadist. Sonntag, a dentist by training, would extract healthy teeth from the mouth of patients with an infected tooth; he took pleasure in declaring women fit to be flogged; and he could not stand for prisoners to show mercy for the suffering of
others, especially Jews.

One day, he caught a prisoner trying to slip a piece of bread to a Jewish prisoner through the wire. He began shouting: “You old pig. You piece of sh-t. You give bread to a Jewess, do you?” He then began beating and kicking the woman until she passed out.

As this small sample shows, Ravensbruck showcased the best and worst in human behavior. It also demonstrated that Nazi hatred extended well beyond the Jewish community. Next time someone tells you that the Nazis were a Jewish problem, tell him or her about Ravensbruck. 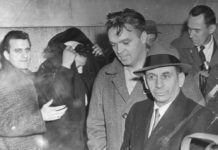 Before WWII, Jewish mobsters kept Nazis at bay in the US — with their fists