The 96-year-old decided to take to the sky in August to get a jump on her October birthday. Members of her family, including her daughter and grandchildren, accompanied her to Taylorsville for her first-ever hot-air balloon ride.

Donning black pants and a gray sweater, Bubbie, as her grandchildren call her, arrived at a sun-soaked field in Carroll County. She clutched a gold necklace bearing photos of her late parents.

“I thought I would take them with me,” Witow said. “I’ve done many things in my life, but I’ve never done anything like this. I’m ready to go, no second thoughts.”

Witlow was born in transit shortly after her parents boarded the last train out of Russia during the Russian Civil War. She was 6-weeks-old when she and her parents arrived in the United States on Christmas Day 1920 and settled in Baltimore.

Witlow, the mother of two and grandmother of six, has maintained her community-oriented spirit and active lifestyle, said her daughter,

Alison Witow, of Pikesville. From plays at Everyman Theatre to lectures at the Pre-Columbian Society, Witow doesn’t miss an opportunity to be out and about.

And that’s why Alison wasn’t the least bit surprised when her mother decided to celebrate her birthday with an hour-long ride in a balloon.

“People always say they want to be like my mother when they get older,” Alison said. “And why wouldn’t they? She’s still going.”

Witow had long anticipated her air journey with Sky Candy Ballooning, a family-owned company in Central Maryland. Although fearful that her trip would be canceled due to inclement weather, the Sunday evening proved ideal for ballooning.

Witlow watched as the balloon crew and her grandchildren, Ethan Tucker, 26, and Jordan Tucker, 29, assembled the 80-foot, rainbow-colored balloon. It added a pop of color to the hilly landscape as Ethan, Jordan and his wife, Naomi Pinson, 29, piled into the basket with their bubbie.

“I hope I make it back down in one piece,” Ethan joked. “My bubbie has been dreaming about this, so we’re happy to make her dream come true.”

Alison and other family members hopped in their cars to chase the balloon, driving along winding roads and parking their cars on the shoulder to wave at Witow and the others as they passed overhead.

Sky Candy owner Steven Andrews said Witow is his oldest passenger. Although he considers it a pleasure to welcome each passenger aboard his 120,000-cubic-foot balloon, flying with her was a special privilege, he said.

“It’s amazing to see people her age who still want to get out there and do things in life,” Andrews said. “Ballooning is really about the passengers. We always love to see their enthusiasm, and Bubbie was all smiles.” 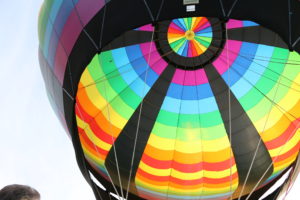 Andrews landed the balloon on farmland in Taylorsville belonging to Audra Mercer and her family, who trekked down a hill to watch the crew disassemble the balloon. Mercer, a mother of two, said she never forgot the day a hot-air balloon landed in a field behind her childhood home in Mount Airy, and she helped take it apart.

In honor of completing her balloon ride, Witow received a pin etched with the words “First Flight” as well as a balloon-shaped trinket made out of a cork and wire.

“It was everything that I imagined it would be,” Witow said. “It was over all too soon.”

Shana Medel is a reporter for the Baltimore Jewish Times.