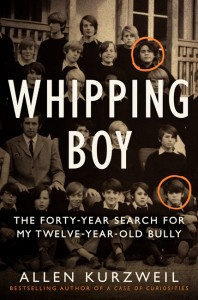 Everybody has a bully. That fact opened more than one door for Allen Kurzweil as he conducted his middle-aged search for his childhood bully, a boy improbably named Cesar Augustus.

It led one librarian to give Kurzweil the password to restricted databases and moved an attorney to let Kurzweil take away files from a court case he needed for his research. “I had a Cesar, too,” Kurzweil heard over and over.

Kurzweil’s obsessive pursuit to find Cesar 40 years after they were roommates at a Swiss boarding school is the subject of Whipping Boy, the author’s memoir-criminal investigation hybrid. A Providence-based novelist, children’s author, journalist and inventor, Kurzweil carried a lifelong trauma from his boarding-school experience, one he came to believe he could heal if he again faced his nemesis.

Whipping Boy is filled with unlikely characters, starting with Kurzweil. “How does a 10-year-old Jewish kid from New York end up at a Swiss boarding school founded by a mystically inclined Christian Englishman?” Kurzweil asks early on.

His father, Robert, was a Viennese Jew and mountaineer who loved the Alps. Robert Kurzweil was arrested by the Nazis in 1938 and, after his fortunate release, managed to get to America, where Allen was born in 1961. Allen spent his earliest winters with his family hiking and skiing in the Swiss Alps with his father leading the way. This idyll ended at age 5 when Robert Kurzweil died of cancer.

It was to recapture that lost time that drew Allen to Aiglon College, where classroom lessons were supplemented by hiking and skiing expeditions. In September 1971 he began his single year there. He was 10 and the smallest kid in school.

One of his roommates was Cesar Augustus, a hulking 12 year old and rumored to be the son of Philippines President Ferdinand Marcos’ security chief. From the start, Cesar latched onto Allen, on whom he bestowed the nickname “Nosey.”

From then on Allen was never safe. In one notable scene, Cesar forced Allen to eat pellets of bread soaked in chili sauce. “Eat it, Nosey,” Cesar ordered as the other boys stood by. Another time, Cesar recreated the “39 Lashes” scene from the musical Jesus Christ Superstar by using his belt to whip Allen/Jesus, his hands tied with socks to the bars of a bunk. These and other abuses went
unreported. “It never occurred to me to rat out my roommates,” Kurzweil writes. And anyway, “teachers took a dim view of tattletales.”

For years after, Kurzweil converted the experience into “diverting narratives of boarding school hijinks.” But the specter of Cesar, his mouth curled in a grimace of pleasure, never entirely disappeared. In 1991, he returned to Aiglon. Climbing the stairs to his old dorm room, he had a panic attack.

And so began his decades-long quest to find his nemesis. On the way – and this is where Whipping Boy takes a turn into a criminal investigation – Kurzweil discovered that Cesar was involved in an international banking scheme known as the Badische Fraud.

Cesar was a shill for a group of scammers posing as Euro-royalty. They were a colorful, improbable group: a decorated, monocle-wearing prince, a baron who wore spats. The youngest member was “Colonel Sherry.” In the book’s illustrations, Kurzweil reproduces Brian Sherry’s brit mila certificate. The “colonel” later turned up in New York as a Messianic rabbi called “Reb Benzi.”

“The Badisch boys” as Kurzweil calls them, entertained their clients in luxury hotels and held meetings in the headquarters of the largest law firm in the world. They were stopped only because one of their victims complained to the authorities, who agreed to investigate.

Their success until then was breathtaking. “How did all these guys end up getting hoodwinked by an elderly man wearing a monocle, claiming to be a descendant of Vlad the Impaler?” said the U.S. attorney who prosecuted the case, and ultimately saw them, including Cesar, imprisoned.

The legal paper trail that Kurzweil followed to understand the scam filled dozens of boxes, and he tells this part of the story in detail. Unfortunately, the experiences at Aiglon that so seared his memory are tissue thin in the retelling. They are sketches at best in Kurzweil’s recounting. And told in the goofy, nice-guy voice that he uses throughout the book, they lack the horror that you have to believe the experiences had on him when he was 10.

On top of that, his year at boarding school wasn’t all bad. He wasn’t a fish out of water at Aiglon. He was in his element on the magnificent treks into the snowy mountains.

By the end of the book, when Kurzweil has learned everything he could about that terrifying year, it’s clear that not only does everyone have a bully, just about everyone sees themselves
as a victim.