Synagogues tend to be solemn places. Long ago, Jan Sedaka saw a place for levity at her synagogue, Magen David Sephardic Congregation in Rockville. As the Washington area’s only synagogue following Judaism’s Sephardic traditions, Sedaka thought she could attract members of the much larger Ashkenazi population using humor.

It took until now for Magen David to agree.

And “Me? In a Sephardic Congregation?”

With humor, they play on the otherness of the culture of Sephardim — who hail from the Middle East and North Africa — in the eyes of Ashkenazi Jews — who came from Central and Eastern Europe — the unfamiliar melodies, the exotic foods and customs. 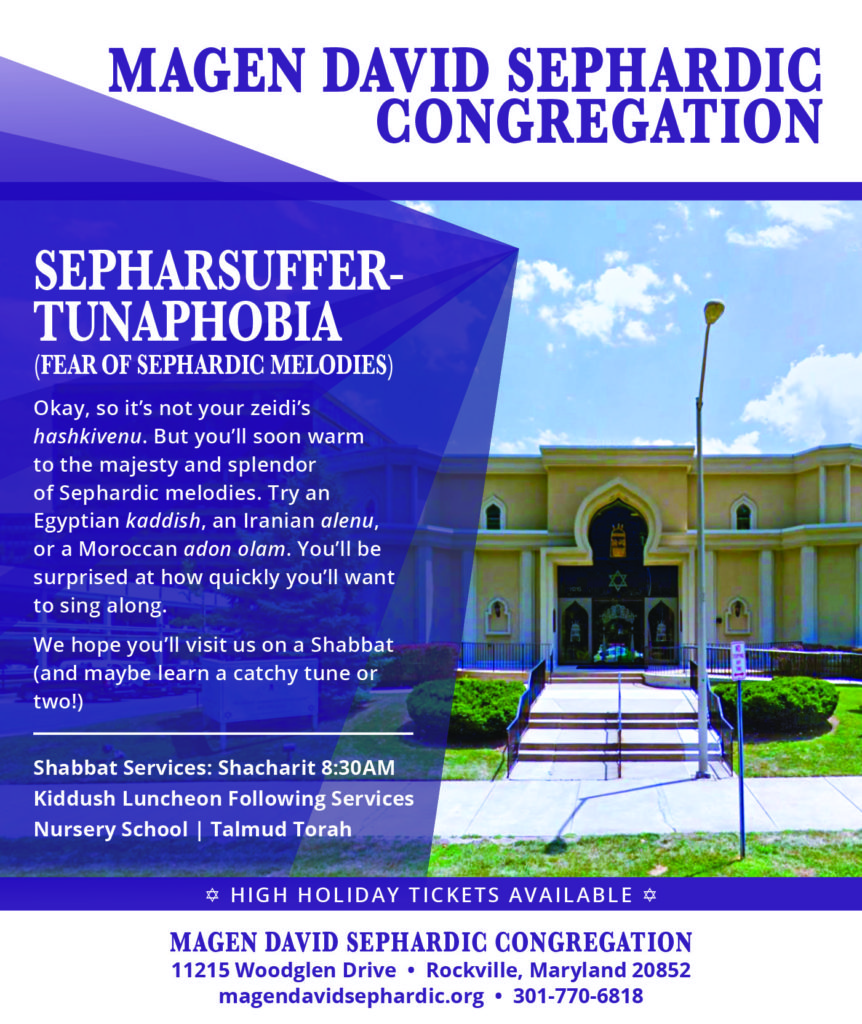 And they riff on the memes that are popular among millennials and the generation following them.

In short, thanks to Sedaka, they aren’t the typical earnest synagogue ad.Sedaka is telling young Jews, Ashkenazi Jews and young Ashkenazi Jews not to sweat the differences and unfamiliarity and they should just come to Magen David and enjoy themselves.

“It’s not supposed to be a fear, but maybe a sense that [Sephardic melodies] are an unfamiliar kind of thing,” Sedaka says. “Maybe there are Ashkenazim who live in the area, who want to walk [to synagogue.] We want them to feel as though when they come, that they are not strangers. We want it to be a warm experience.”

Many congregations are looking to attract millennials who, more often than not, are unaffiliated. A 2013 Pew report found that most Jews identify as “Jews of no religion.”

They are less interested in joining synagogues or observing
religious traditions.

Sedaka says Magen David is working to demystify Sephardic culture and convince people it’s OK to join even if they don’t know all the customs. About 30 percent of the congregation is Ashkenazi, she says.

“If you grow up in an Ashkenazi community, you don’t know about us and you don’t know what we’re like,” she says. “We want to tell Ashkenazim and others who do not have this experience that we’re just like them. Only different.”

“What the ads signify is diversity and inclusivity,” says Debbie Shemony, a member of the Magen David staff. “People should feel like they fit in.”

Sedaka says she came up with the idea of humorous ads nearly two decades ago, but that the synagogue board rejected it.

“There was natural concern that a humorous approach to something as
serious as religious affiliation and Jewish worship could be viewed as shallow and off-putting,” she says.

When a new board met this year, she approached them. This time they were ready for something new. Ironically, “Funny you don’t look Sephardic” and “Sepharsuffertunaphobia” were the same ideas she presented years ago.

Has it paid off?

Shemony says the synagogue has gotten a few calls in which someone complimented the ads and a few in which people expressed interest in Magen David’s services.

Encouraged, Shemony and Sedaka say they want to do a second campaign in the spring.