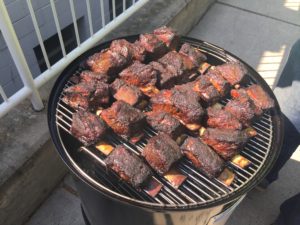 PHILADELPHIA — A Styrofoam box full of smoked brisket is being eyed by a line of people.

To the uninitiated, it looks like a to-go box. But to the 26 participants of the Kansas City Barbecue Society (KCBS) certified judging class, it adds up to an abundance of questions, concerns and critiques.

In typical Jewish fashion, these soon-to-be certified judges for kosher barbecue questioned everything: What’s a smoke ring? Do you sample both a slice and an end piece? Why is this rib different from all other ribs?

To become a judge of kosher barbecue, participants took the five-hour class this month at Temple Beth Hillel-Beth El in suburban Wynnewood, Pa. It was only the second kosher course offered by KCBS. Judge hopefuls had to pass a short exam, while surrounded by bundles of paper towels and water bottles capped and laid horizontally to avoid spills.

KCBS has certified 20,000 judges across the country. In addition to this class, 14 other judges have been kosher certified.

KCBS representative Carol Bigler explained each rule down to the nitty-gritty. After a few hours of careful clarification outlined in the guidebook by Bigler, the judging commenced.

For taste and texture, it’s the flavor and smoke of the meat that matters. Each category is rated on a scale of two to nine (nine being the best), and then multiplied by a weighted number.

The process is tedious; judges must score everything from flavor profiles to minute visual details.

“We want each and every entry to be judged on its own merits,” Bigler said. “Whether you like white meat better than dark meat, it doesn’t matter. It’s what’s presented to you in that box.”

Between each sample, judges cleanse their palates with crackers and water. It’s possible to consume about two pounds of meat during a contest, Bigler explained to the salivating sighs of hungry participants.

Per new kosher rules, the box in which the meat is presented must be lined with aluminum foil, but that’s for aesthetics. Still, no foil can result in a lower score.

Participants critiqued the samples firmly yet fairly — some favored the taste on the outside of the brisket, for instance, but declared the inside “bland” — while grillmaster Alan Glazer sliced and prepared the turkey in the kitchen.

The sizzling sensations each had a smoky heat. The beef ribs were firm with a soft heat and a mild pepper bite. Stu Gordon, who organized this class, called them “one-handed ribs” — the bones were thick enough to hold and grasp in one hand and go in for a deep bite.

After the class, everyone faced east toward Jerusalem to recite the KCBS oath to judge meat “so that truth, justice, excellence in barbecue and the American way of life may be strengthened and preserved forever.”

Although she hails from the land of pulled pork and fried everything — Alabama — Bigler, who is not Jewish, said altering KCBS guidelines to fit the laws of kashrut wasn’t a big adjustment. She worked with Kansas City, Kan., Rabbi Mendel Segal.

“It was a real collaboration between the two of us, and other Jewish community members who came in and gave me ideas of what to do and what not to do, which is even more important,” said Bigler.

Some participants were new to kosher rules, too.

Tony and Susan Corrice flew from the Indianapolis suburbs for the class. They attended a KCBS contest in October where they noticed someone with a tag “KCBS Kosher Certified” and were intrigued.

The Corrices, who are not Jewish but are food lovers, wanted some variety in barbecue judging.

“When you go to standard KCBS contests, it’s always the same four categories,” Tony said, “so that was my interest because it’s just not what we normally do.”

“And we like to learn more about things that are not typically us,” Susan added.

Tony Corrice, who is also a master judge, said the kosher competitions level the playing field because meat and the cookers to cook them in are provided.

“Everybody’s got to have the same tools and the same options,” Susan noted. “You go to some of the typical KCBS contests and there’s people that spend $20,000 on a cooker and then there’s a guy next to you that’s got a barrel cooker. The small guy might get lucky and cook something that the big dog couldn’t, but usually it’s the bigger teams that do so well. So to level the playing field, that’s exciting.”

A little closer to home, nothing was going to stop Queens, N.Y., resident Mordechai Striks from attending the class — not even a four-car fender bender on the way down.

“I got pulled off the highway and then I took an Uber here,” he said. “I wasn’t going to miss it. Everything is OK, thank God.”

Striks has been competing for several years in kosher competitions, but this class showed him the other side of things.

“I’ve never heard what’s been told to the judge or by the judge or what kind of challenges they have. It was interesting to [see] how I can be better,” he said.

Although not a competitor, Glazer, a radiologist when he’s not grilling, dedicated a chunk of his time to preparing the meats through the night for the judges-in-training.

He added wood to the four round grills in the parking lot behind the synagogue and kept cooking right up until the meat met the judges’ mouths.

Although introduced as the grillmaster, Glazer said he is just the opposite.

“I do a lot [of grilling and smoking] at home, but not for crowds.”

Rachel Kurland is a staff writer for the Jewish Exponent in Philadelphia.