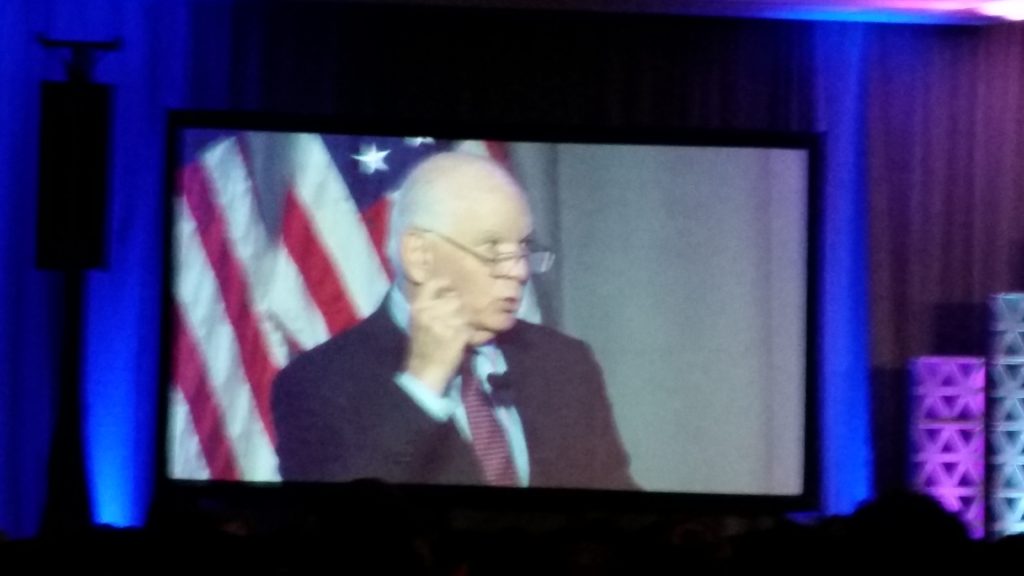 Sen. Ben Cardin (D-Md.) knew how to bring a crowd of about 3,000 dovish pro-Israel activists to their feet as he spoke Monday at J Street’s 10th annual policy conference.

“Despite what the Congress thinks and what the president thinks, the power is with the people,” he began as he took to the podium inside the Omni Shoreham Hotel in Washington.

Cardin used his speech to sharply rebuke both President Donald Trump and Israeli Prime Minster Benjamin Netanyahu for several recent decisions, which included the president’s series of executive actions banning immigrants from Muslim-majority countries, and the prime minister’s reversal of an agreement earlier this month to accept roughly 16,000 African migrants.

“When the prime minister of Israel takes steps that compromises refugees that are in fear of their own lives, or crosses the line on how he handles protests in his own country we speak out,” he said to applause.

Cardin also criticized Netanyahu for his 2015 speech urging Congress to vote against the Iran nuclear deal (a deal Cardin himself opposed), saying it “created a partisan division in our own country.” Cardin acknowledged that he had voted against the deal, but said he now agrees with former National Security Adviser Susan Rice, who had spoken immediately before the senator, that it would be a mistake for the United States to abandon the agreement.

“This is a dangerous strategy that isolates the United States,” he said.

Cardin also expressed concern about the global rise of anti-Semitism, placing much of the blame on Trump due to the mixed messages he gave after the deadly Unite the Right rally in Charlottesville last August.

The Maryland senator used the second part of his 25-minute speech to condemn the boycott, divestment and sanctions movement. Cardin reminded the audience that he co-authored the Israel Anti-Boycott Act last year that would punish American companies that comply with international efforts to boycott Israel.

“You may have heard about it, it’s had some controversy,” Cardin said of his bill.

“I can tell you that I have spent my entire political career defending First Amendment rights. Anyone who wants to criticize Israel or boycott Israel … I think you’re wrong. But you have your constitutional right to do that,” he said. “Let us work together to figure out a way to protect the freedom of speech, but also protect American businesses from being bullied into boycotting Israel.”

Cardin assured the J Street crowd that his bill would not change the past American foreign policy positions of opposing Israel’s settlements.

“I believe that we should not take sides against how settlements have been unhelpful for Israel’s long term-survival,” he said. “I want to make sure we don’t do anything in this bill that would compromise the traditional view of this country in regards to Israel’s settlements.”

Cardin closed by reaffirming his support for the two-state solution, and recalling one of Israel’s late esteemed leaders.

“Shimon Peres understood that Israel’s future is inextricably linked to Palestinians living in peace and prosperity.”