Abortion. Depression. Anxiety. These can be difficult topics to broach at the dinner table. But Anna Sellheim makes them a focus of her work as a short-form cartoonist.

Sellheim, 32, grew up in the Chevy Chase neighborhood in Washington and lives in the Gwynn Oak neighborhood in Baltimore County. By day she works as an administrative assistant/scheduler at a tree removal service. At night she pursues her passion: comics. The majority of her work is one-to-four-page comics detailing Sellheim’s struggle with mental health and various social issues.

“I use art, either my fine art or my comics, as a way of making connections with people,” Sellheim said. “And I find it’s way more effective to make a really deep, genuine connection with an audience through a story you tell, versus a piece of fan art.”

Much of her work features her mother, with one comic describing how she dealt with the loss of her husband. Sellheim comes from an interfaith family. Her mother is a New Jersey Jew. Her father was a “hardcore atheist, former WASP from North Dakota,” Sellheim said. She sees herself as culturally Jewish and religiously agnostic. Sellheim said her comics, self-reflective and personal, fall into the tradition of female Jewish cartoonists retelling their experiences through their art.

“I come from a long line, a rich history of neurotic Jews that are telling stories about their past and they’re often really focusing on trauma,” Sellheim said. “I think our Judaism connects a lot of our sensibilities and our narrative voice.”

Sellheim started to get into comics while attending middle school at Charles E. Smith Jewish Day School, in Rockville. She has always had an interest in the art form, but didn’t start to develop a passion for it until discovering Japanese graphic novels, or manga.

“I always found the aesthetics of superhero comics to be repugnant,” Sellheim said. “Like, I thought they were hideous looking. So a lot of the manga aesthetic really appealed to me. And then I went through a hardcore phase of just being obsessed with manga and Japanese animation until around eighth grade. And I think I overdid it.”

Sellheim started to draw comics more while in high school at Duke Ellington School of the Arts, in Washington. Around that time, she transitioned into what she described as “sad-sack indie boy comics.” These stories focused on teens dealing with loneliness and isolation.

It wasn’t until after her father died of cancer in 2013 that she became obsessed with gag comics. In 2016, Sellheim earned her Master of Fine Arts degree at the Center for Cartoon Studies, in Vermont, and today draws a mix of gag strips and more personal narrative pieces.

Sellheim’s flagship series is “Everything’s Fine.” It’s an autobiographical comic strip detailing how she’s dealt with depression, anxiety and mental health in general. The strip’s art style is abstract “because I find drawing myself realistically to be literally the most boring thing in the world to draw.” The second volume of the series was nominated in 2017 for a Broken Pencil Zine Award.

One of Sellheim’s fans-turned-friends is Nora Robinson, a student at the Maryland Institute College of Art. She encountered Sellheim and her art last year at an indie comics expo. Robinson described Sellheim’s comics as colorful and easy to digest.

“What Anna really accomplishes with her work is just connecting to the reader on a deeper level. I feel like I’m friends with her just from reading the comic,” Robinson said. “Comics is a very complicated medium. Pairing images with words is a whole art form. And she manages to do it perfectly.”

Sellheim is part of the punk, DIY movement prevalent in the indie comics community. The majority of Sellheim’s work is self-published, self-printed and self-distributed. Many of her projects are funded by subscribers on Patreon who pay per project. Sellheim said the downside to DIY is the lack of distribution. Partnering with a major publisher greatly expands the potential audience for the work. It also can streamline production.

On the other hand, the reason Sellheim prefers the DIY route is for creative freedom. She said many of the themes she writes about might be restricted by a major publisher. But the main reason is the community aspect of DIY. Sellheim enjoys meeting and collaborating with other local comics artists who also do everything themselves.

“If you’re getting published by a major publisher, they are going to make you way more well known,” Sellheim said. “But DIY, the reason I like it is because this is like a passion thing. It’s not a full-time job. For me, it’s way more about the connections I’m making with other people.”

It’s the pursuit of those connections led her to join comic artist social groups like the Square City Comics in D.C., BMore Into Comics in Baltimore and led her to become a co-organizer of DMV Indie Comic Creators. Sellheim said it’s these groups’ support that’s motivated her to continue to create.

“Connections that I’ve made through my products I think wouldn’t be as authentic or 100 percent me if it was being mass produced by somebody else,” Sellheim said. “It’s one thing for me to get hired to draw somebody else’s story and then have someone fangirl out. But it’s another thing if it’s like I am telling you a story about my personal experience and then someone comes up to me and tells me how much that experience has or that comic meant to them because they have gone through something similar. That’s the reason I friggin make comics.”

Sellheim’s work can be seen on annasellheim.com and her zines can be found for sale in D.C. at Fantom Comics and Big Planet Comics. 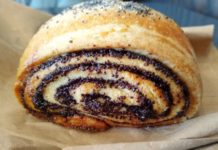 If you want this delectable Jewish pastry, you’ll have to go to Cleveland