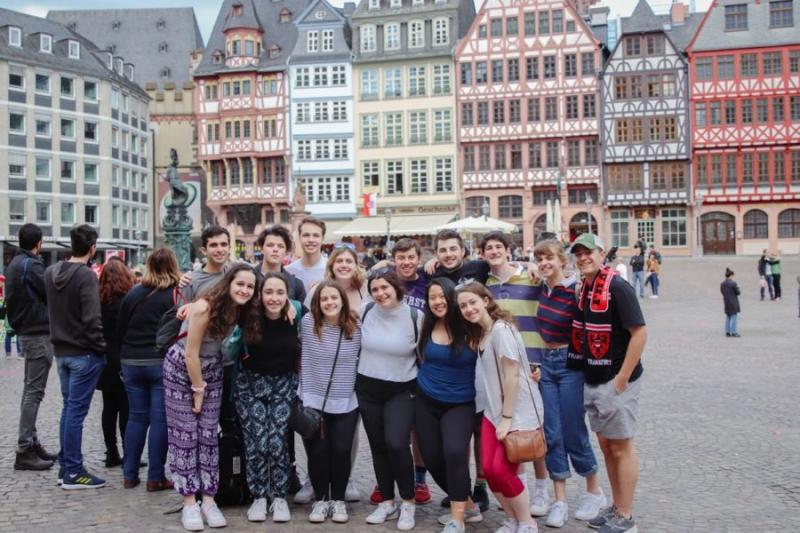 We have always felt incredibly proud to be Jewish. From attending Jewish Day School for thirteen years, to celebrating our Judaism at our Conservative summer camp, to being active members of BBYO, the two of us have committed ourselves to embracing our Jewish identity and the Jewish community that we are so lucky to be a part of. Our pride in our Jewish identities is part of why attending BBYO’s Ambassadors to Germany—a nine-day immersive trip that explored Jewish life in Berlin, Frankfurt and Bad Sobernheim—felt so natural and why we felt like we owed it to ourselves and to the Jewish narrative to attend. Growing up, it seemed as though history had painted Germany harshly and starkly. And while to us the horror of Germany’s actions throughout the twentieth century can never be forgotten, it is in sharp contrast to what Germany is today.

Over the course of the nine days, 15 teens from across the United States, Lithuania and Canada, were immersed in the vibrancy of German Jewry. Through attending seminars with local teens who are a part of BBYO’s sister organization, ZWST, and exploring memorials, historical sites, and museums, we came face-to-face with the history and horrors that took place in Germany. And yet, we were bolstered by the vibrancy of the Jewish community that lives in Germany today.

A considerable part of what has made us proud to be Jewish from such a young age is that Jews seem to have an indescribable and indestructible bond that, as we learned in Germany, not even geography can break. Although we were in a foreign country with a heavy history, our Jewish experiences felt so comfortable and so familiar that we no longer felt a barrier between our American Jewish upbringing and the Judaism practiced in Germany. Suddenly, the historical weight of the country’s past seemed lifted from our shoulders and we transitioned from being observers of German society to engagers.

Since the mission of the trip was to connect with teens of ZWST, we attended a leadership seminar in the countryside in the hopes of learning how ZWST functions and what similarities exist between our two organizations, and to understand the struggles of living in Germany as Jews. Despite being far from home and attending a conference seemingly very different than our own, reading the Hebrew words from the siddur during Shabbat services made us feel like we were at home—at home with the Jewish people. We felt a similar sense of comfort while belting out the Birkat HaMazon surrounded by German teens who, though we had just met, suddenly felt like we had known for years because of our shared traditions and experiences.

As participants in BBYO, a global leadership organization, having the opportunity to connect with teens who live on a different side of the world and who seem so different than us ultimately taught us the importance of branching out and talking to individuals who we would not have been able to connect with otherwise. Had we not allowed ourselves to visit Germany, despite our initial ambivalence about the country’s history, our perceptions of what Germany and German Jewry is like today would likely still be negative and dark. And while anti-Semitism still exists today, and the Jewish community may not be as large or lively as it once was, after attending Ambassadors to Germany we believe that German Jewry will only continue to flourish.

Attending the leadership seminar and trip not only gave us immense confidence in the Jewish community in Germany, but a great deal of pride being a part of the global Jewish community as well. The trip informed us that the future of German Jewry is nothing but bright. It was evident through our travels that younger generations are quite capable of transforming Germany’s Jewish community into a welcoming and safe environment for all Jews–something that is much needed after a history of so much pain and hatred.

Daphne Kaplan is a rising junior at the Charles E. Smith Jewish Day School and recently served as a BBYO chapter president.

Ilana Kaplan is a graduate from the Charles E. Smith Jewish Day School and an incoming college freshman at the University of Michigan.