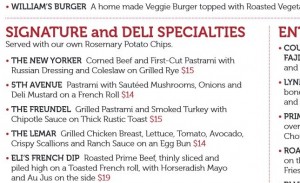 A highlight of the menu at the Char Bar kosher restaurant in Washington are the items named for some of its more prominent Orthodox clientele. It’s a common practice of delis everywhere. But what happens if the illustrious becomes infamous?

Until Sunday, the Freundel was a sandwich featuring grilled pastrami and smoked turkey, with Chipotle sauce on a rustic bun. Char Bar served it up with rosemary potato chips. But the restaurant’s owners must have thought the item named after Georgetown Rabbi Barry Freundel, who was arrested on Oct. 14, might not go down well with patrons.

The Freundel is gone from a new menu.

But, a day after Freundel’s arrest, Soumekhian said they weren’t pulling the namesake sandwich from the menu.

“At this point everybody is entitled to due process,” Soumekhian said.

He went on to praise the rabbi’s wife, Sharon, director of Hebrew and Judaic studies at Jewish Primary Day School in the Nation’s Capital, in Washington.

“Sharon Freundel is a great lady,” Soumekhian said. “The Freundel is named for the whole family. Our thoughts and prayers are with them.”

The Freundel has been rebranded as the Georgetown.