My 98-year-old mother died last week and I’m waiting to feel something. I watched family and friends cry at her funeral and I listened to their outpouring of love and accolades for the remarkable woman my mother was.

To a person, they spoke of how loving and generous and talented she was — and yes, that she was also forceful and insistent — how much of an impact she made on them, how they remain in awe of how she survived Auschwitz at great odds, and how she rebuilt her life multiple times with flair, energy and optimism.

I sat there quietly, gripped by cognitive dissonance. The woman everyone knew was all those things they described. She was a resilient survivor, a gifted dressmaker and teacher, a devoted friend, but with me her other side overshadowed it all.

Early on, as a Jewish child in postwar Hungary, I knew my job was to take care of her emotionally, to mitigate the suffering that happened to her before I was born. I spent a lifetime doing that while also bearing the brunt of her relentless criticism and control. It often felt as if nothing I did was ever enough, or good enough, though I do recall seeing her happy at times with my outfits and she took pride in my accomplishments.

But regrettably, I am now hard-pressed to recall more than a few positive moments together over the more than six decades of my life with her.

I rarely cried when she would mercilessly pick on me. Depression was more my style. I knew she had to win and I had to surrender in what always felt like a life and death struggle for her no matter the issue. From my room I heard my father echo what I had been pleading with her, “Ilona! She’s almost 50 years old! When are you going to stop dictating what she should do?!”

“I am so sorry she treats you like this,” he said when he came in to comfort me, adding his perpetual advice, “Don’t pay attention to her and do what you think is best.”

Shortly after Dad passed away, Mom and I came to blows again, and she retorted accusingly, “Your father said I should be nice to you since you are so sensitive.”

Being sensitive was not a value for her, and I understand why. Being sensitive was a luxury she could not afford if she was to survive as a young woman in Auschwitz. In fact, once when we were talking about Auschwitz, she looked at me and stated, “You would never survive.”

Perhaps she’s right, yet we don’t really know until we’re tested. And at least I can say that thus far I have survived her, albeit with scars.

There was a period of two blessed weeks, six years ago, the summer I turned 60, when I had the mother I wished for: kind, calm, appreciative, going with the flow. She had fallen in her doctor’s office after getting a clean bill of health, and broke her hip, then suffered a cascade of near-fatal medical complications. My brother and I took turns staying around the clock with her in the hospital and then in rehab, to be her advocate and translator, as she often reverted to her native Hungarian.

It was painful to watch her suffer and I did everything I could to alleviate it. But it was also a period of relief, for she was too sick to do battle with me. Once she started recovering, she was back to her true self with me, which for all of us was ironically a good sign.

I did learn a lot from my mother and inherited her creativity and resourcefulness, for which I’m grateful. I do feel good about having been the consummate dutiful daughter despite her wrath, and perhaps I did a public service being her emotional caretaker that may have enabled her to be shining in the world making such a positive impact on others.

Whatever I inherit from her will, though, mostly feels like reparation payments, for I, like many children of Holocaust survivors, remain collateral damage.

Remarkably, despite our battles, my mother and I never stopped loving each other, and fortunately I could always summon enough amnesia to begin each visit anew. As I stare at the dwindling light in the tall, blue shiva candle graced with a simple Star of David, I am coming to accept that it’s OK that I am not filled with the same sorrow and boundless reservoir of love I felt when my father passed.

I felt sorry for Mom, I loved her, I admired her, I wrote books and articles about her, and I did as much as I could for her. And what I am most grateful for is that with my own kids I have the kind of warm and supportive relationship I wish I could have had with her. May she rest in peace and may her memory be for a blessing. n

Marta Fuchs is a professional speaker, psychotherapist and author of “Legacy of Rescue: A Daughter’s Tribute.” She was born in Hungary to Holocaust survivor parents and escaped with her family in the wake of the 1956 Hungarian Revolution. Her website is MartaFuchs.com. Her mother, Ilona Engel Fuchs, died in September. 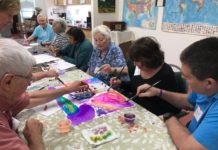 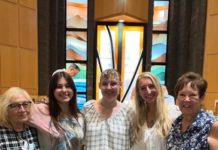