Hannah Isabela Figueredo, daughter of Kara Blank-Gonzalez and Marco Gonzalez, and Jorge Figueredo and Marisa Martineau, was a bat mitzvah on May 26 at River Road Unitarian Universalist Congregation. Hannah lives with her parents and two sisters in Northern Virginia and attends Thomas Jefferson Middle School in Arlington.
Hannah completed seven years of Jewish Cultural School at Machar, the Washington Congregation for Secular Humanistic Judaism. As a bat mitzvah, her presentation focused on her Jewish and Colombian heritage and the research she undertook on the migrations of her Colombia family and her Jewish family from Eastern Europe and Argentina.
For her service project, Hannah volunteered for Kind Works, setting up apartments for refugees from Pakistan and Eritrea. Her choice to volunteer with Kind Works represents her commitment to helping families who immigrate to the United States today, much like her family did in the 20th century.

Andrew Nathan Wagger, son of Lizabeth and David Wagger and brother of Marc and Eric Wagger, will be called to the Torah as a bar mitzvah on June 9 (26 Sivan 5778) at Ohr Kodesh Congregation in Chevy Chase.
Andrew is the grandson of Barbara and Gerald Wagger of Palo Alto, Calif., and Myron and the late Marilyn Wiener of Metuchen, N.J. He is a seventh-grader at North Bethesda Middle School in Bethesda.

Eliyahu Meir and Naomi Zaks of Kiryat Sefer, Israel, announce the birth of their son, Shimon, on May 3. Also welcoming Shimon are his sisters, Tehila and Tzivya. Joining in the simchah is his paternal grandmother, Chaya Kranz; great-grandparents, Rabbi and Rebbetzin Herzel and Miriam Kranz of Silver Spring; paternal grandfather, Aaron Zaks of Modi’in Illit, Israel; maternal grandfather, Ben Zion Cassouto of Raanana, Israel; and great-grandmother, Ann Cassouto of Brooklyn, N.Y. Shimon, who was born on Lag B’Omer, is named in memory of Rabbi Shimon Bar Yochai.

Nina Blendman and David S. Frank, of Bethesda, were married on May 6 at the Rock Creek Mansion in front of many of their closest family and friends. Their officiant was Cantor Caron Dale of Hevrat Shalom Congregation. Their ketubah, designed by artist Angela Munitz, included what is most important to them: to meet life’s trials with quiet strength, courage to grow as individuals and to practice mutual respect. The couple, in honor of their guests, are contributing to the Alzheimer’s Association, the Scleroderma Foundation and Hadassah, Greater Washington Region, Neshama Chapter. 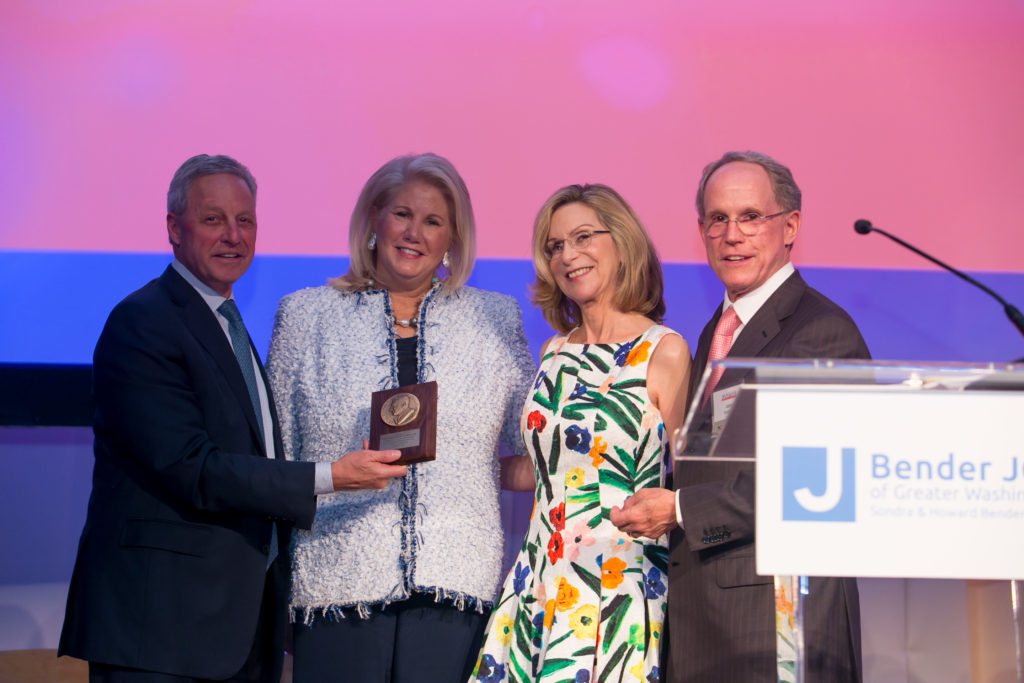 From left, Albert H. “Sonny” Small Jr. and Tina Small receive the Benjamin Ourisman Memorial Award for Civic Achievement from Beth Ourisman Glassman and John Ourisman on May 16 at Imagine: A Night Supporting Scholarships at the J, held at the Bender Jewish Community Center of Greater Washington, in Rockville. Photo by Suzanne Stluka.