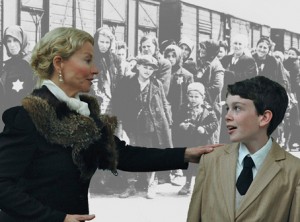 While it may not seem like the breaking of glass windows at Jewish-owned buildings and other acts of vandalism and violence by the Nazis would have inspired any creativity, two upcoming concerts at Strathmore Hall in Bethesda prove art can come even from such evil acts.

In commemoration of the 75th anniversary of Kristallnacht, more than 300 people from 22 area synagogues will perform a concert entitled Voices of the Holocaust on Sunday, Nov. 10. The night before, an original opera called Lost Childhood will make its debut before a full orchestra.

The Sunday night concert, featuring cantors and youth and adult choirs from D.C., Maryland and Virginia, will perform a musical work organized in five parts. It has been arranged from 22 original melodies written by Jews while they were living in the ghettos and concentration camps during the Holocaust.

“It’s a major undertaking. We are talking about a lot of volunteer choirs. Each group has to sing some Yiddish and not everyone is comfortable with that,” said Cantor Laura Croen of Temple Sinai. She, along with Cantors Marshall Kapell of Congregation B’nai Tzedek and Susan Berkson, who teaches at Howard County Community College, are co-chairs of the event.

“It’s going to be amazing,” added Berkson, who has been cantor at Temple Emanuel in Kensington and Congregation Or Chadash in Damascus. “All the cantors each are doing a solo or a duet. It’s going to be a very, very big thrill.”

“But there are moments when we will all be singing together,” explained Croen.

Voices of the Holocaust marks the third time area synagogues have performed together. They also did for Israel’s 60th birthday and the 350th anniversary of Jewish music in America.

Performing along with the synagogue choirs will be singers from Juniata College in Pennsylvania. The Columbia Orchestra will accompany the singers, and Jason Love, a conductor and cellist from Howard County, will lead the entire production.

A discussion with arranger Sheridan Seyfried and moderated by Tara Sonenshine, former under secretary of state for public diplomacy and public affairs, will precede the concert. Following that, there will be a short service to commemorate Kristallnacht.

About two years ago, Berkson was visiting her son at Juniata College and attended a school concert with music from the Holocaust. “We were just amazed how wonderful it was,” she said, adding that concert became the seed that eventually led to the upcoming community-wide concert.

Individual choirs have been practicing separately and will only get together as a group two times before the actual concert.

The night before, an opera that has been 16 years in the making will be performed. It is a collaboration by two cousins (by marriage) and tells the story of a troubled Jew who was a young child during the Holocaust and a German, from a prominent family of Nazi sympathizers. It is loosely based on the book The Lost Childhood by Yehuda Nir but mainly centers around a ficticious meeting of the two men as adults.

Composer Janice Hamer, who teaches at Swarthmore College in Pennsylvania, and librettist Mary Azrael of Baltimore, who writes poetry and teaches, collaborated on this production.

Azrael has lived in Baltimore and written poetry most of her life. She has had a few books published, some poems set to music and teaches classes at Johns Hopkins University.

After reading The Diary of Anne Frank as a child, she knew at once she wanted to be a writer. “I got from her it’s really important to tell your story, because the world can change at any minute,” Azrael said about Frank.

Azrael had collaborated once before with Hamer and won a national award. “So we were kind of giddy” and thought we should keep working together, Hamer with the music and Azrael with the story and words.

They decided to write an opera, thinking it would consume a year or two of their lives. They spoke of doing something about Anne Frank, pre-war Eastern Europe and Jewry.

However, Hamer met Nir, who gave her a copy of his memoir, and Gottfied Wagner, the great grandson of composer Richard Wagner. Hamer was fascinated how both men’s anger had affected their lives.

Nir’s anger arose from his youth when he had to pose as a Polish Catholic during World War II after his father was killed by the Nazis. Wagner was upset with his family’s strong anti-Semitic views that he continues to fight.

“They shared a kind of anger,” said Hamer, whose parents live in Rockville. She noted that Wagner has nothing to do with his family. And Nir “called himself an angry Jew,” explaining he was not a victim but a veteran of the war. “He had kind of an aggressive stance.”

Azrael began writing the words after reading Nir’s book. While Nir and Wagner “are really good friends,” she chose to place them in conflict. The story, she explained, deals with the question “if you are not my enemy, who am I? Who are you? This is not a story about Jewish persecution.”

She wrote what she felt, imagining the feel of the music and what instruments would be played as she went along. Azrael plays piano, dulcimer and guitar and considers poetry the closest word form to music.

Meanwhile, she spoke with Hamer as she progressed, working to “inspire Janice enough to write the music for it.”

Then Hamer worked on the music, hearing “the sounds in my mind, all the colors,” she said. The result is a score of 473 pages that took about 10 years to write, five years to orchestrate and another two years to proofread.

As if the writing wasn’t enough, the women also raised $100,000 from individuals and foundations.

The pair utilized lots of workshops so Hamer “could hear back” what she was writing. A form of the opera was performed during a summer festival in Israel in 2007, using just a piano.

The two women plan to have a recording made of their Nov. 9 performance and then send it around, hoping to convince other orchestras to take it on.