PHILADELPHIA — Steven Cook and Michael Solomonov’s last cookbook, the James Beard Award-winning “Zahav,” told the story of Israeli cuisine through the lens of the pair’s Philadelphia restaurant, with plenty of emphasis on executive chef Solomonov’s personal history. Their new book, “Israeli Soul,” looks at how Israeli cuisine has evolved from the melting pot of migratory communities who have come to live there.

To get this reflection of disparate culinary traditions right, Cook, Solomonov and photographer Michael Persico went to Israel to eat 82 meals in eight days.

The manic eating trip to research the book gave all three great fodder for the cookbook-cum-travelogue, which, through essays and recipes, takes readers from a falafel stand owned by Yemenite Jews an hour north of Tel Aviv to a tiny Tunisian restaurant in Tzfat. Photographer Persico had never been to Israel before.

“Seeing it through his eyes was great for us,” said Cook, whose championing of Israeli cuisine is a way for him to keep connected to his Jewish identity.

All the photos of completed dishes were taken by Persico at Solomonov’s Philadelphia apartment. All the meals, in other words, are chef-tested and –approved, a meaningful measure given all the accolades Solomonov has received for his cooking, including two James Beard awards.

Solomonov remains executive chef at Zahav, but in all other things, he and Cook work collaboratively, though as Cook admits, “Mike’s the famous one.” Not that he minds.

“Our partnership works really well because we compliment each other because he’s really good at and enjoys doing the things I’m not good at and vice versa,” said Cook. “We run the business together and make all the decisions together. We develop the programs, the menus together. But he spends a lot of his time out in front talking to people and the media about what we’re doing and I’ll be more in the background working on development and operations and things like that. I’m content to do what I do and go home at night.” 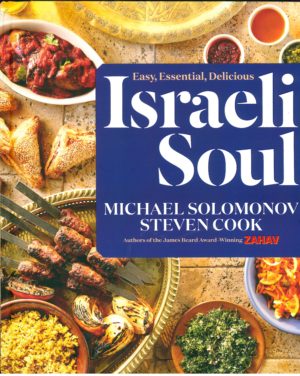 The pair did go through a tough time a few years ago, when Solomonov was struggling with substance abuse. He bravely spoke with The New York Times’ Frank Bruni about addiction in 2014, admitting that he’d been addicted to crack cocaine in 2008 — a brave confession for a celebrity chef. Solomonov does not regret the admission.

“Every single day I’m reaffirmed in that decision,” he said of speaking out. “I just think we’re in a day and age when sweeping things under the rug in this taboo of addiction is the single most stupid f—ing thing. I don’t understand it. You’re not supposed to keep secrets in addiction. Every single family in this country is affected by it. There are 120 opioid deaths a day. That’s 9/11 every three weeks and a f—ing football stadium full per year of dead people from every single walk of life. And I’m supposed to be secretive about this? It’s crazy.”

Now, with the new book coming out, Solomonov is likely to be the subject of attention again, including, perhaps, questions about politics that both he and Cook would rather avoid.

“We’re not naïve,” said Cook, “but we want to talk about the parts of Israel that people don’t always see when the news is talking about conflict.”

“It’s very difficult because people want to use Israeli cuisine as this proxy for politics,” Solomonov said. “Cooking Israeli food and celebrating the various cultures in Israel and acknowledging the huge importance of Palestinian cuisine in culture I hope acts as a for as diplomacy which is a little bit less abrasive, a little more accepting and a little less polarizing. The state that we’re in right now is that you are meant to pick a side and that’s what you stand by, regardless. And I don’t think that is reasonable or realistic or human.”

Both men know that people will argue over some of the food that’s included in the book, but Cook calls that kind of discussion “a red herring.”