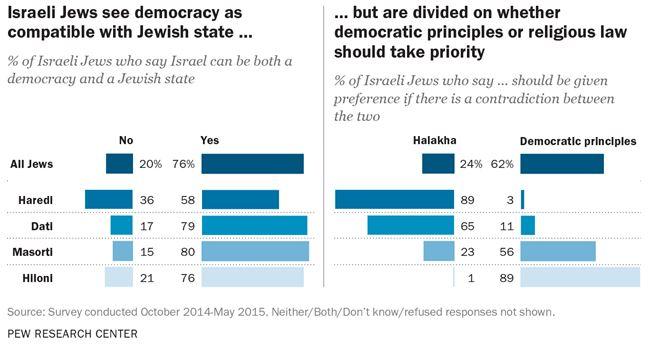 There was more than one bombshell in the Pew Research Center’s study, “Israel’s Religiously Divided Society,” released this month. The first was the finding that 48 percent of Jewish Israelis support “expulsion and transfer of Arabs from Israel.”

But maybe it was a bombshell only in the United States. In its exploration of Israel’s religious identities, the study describes a very different Judaism than the American variety, which Pew explored in its 2013 “Portrait of Jewish Americans.” The two communities are similar enough for each to support the other, but different enough for the new study to cause a blow to American Jewish expectations.

Taken together, the two Pew studies cover 80 percent of world Jewry. The Israel survey found that 40 percent of the country’s Jews call themselves chiloni, or secular; 23 percent say they are masorti, or traditional; 10 percent are dati, or Orthodox; and 8 percent haredi or ultra-Orthodox.

But the English translations do not fully explain the meaning of the Hebrew words. And that can lead to surprises in an American reader.

When the Pew study of Jewish Americans was released, critics noted how 73 percent of American Jews said that remembering the Holocaust was an important element of their Jewish identity. Critics said this showed how limited American Judaism is.

But 65 percent of Israelis also said that remembering the Holocaust was an important part of their identity.

Thirty-eight percent of Israelis said security was their most crucial issue. But 39 percent said economics was Israel’s greatest long-term problem. By contrast, 66 percent of American Jews said security was Israel’s biggest problem. But they completely overlooked the high cost of living and income disparity that caused hundreds of thousands of Israelis to take to the streets in 2011.

A March 17 panel discussion at the Pew Research Center in Washington tried to make sense of these findings.

One issue is each nation’s conception of pluralism.

While in America, no religious approach is more important than another, “Israeli pluralism has never considered an alternative religious ideology to Orthodoxy as worthy,” said Steven M. Cohen, research professor of Jewish social policy at Hebrew Union College.

Added Joy Levitt, executive director of JCC Manhattan, “For a lot of chiloni Israelis, religion is the government. It’s the state.”

And for them, the state-sponsored Judaism is Orthodoxy. Asked why the average Israeli would want to stop another Israeli from being married by a non-Orthodox rabbi — only the Orthodox rabbinate has state-sanctioned authority to intervene in personal status questions among Jews in Israel — Shmuel Rosner, a fellow at the Jewish People Policy Institute in Jerusalem, said, “Because they don’t want to import the American split into streams [of Reform, Conservative, Orthodox, etc.]. There is an advantage to having one stream that everyone follows or ignores. They do not want to add to the splits in Israel.”

Compared to Israel, American Jews “have a huge stake” in the separation of religion and state because they are a minority.

When it comes to how each society views the Holocaust, Rosner noted that Israel was founded to counter Jewish helplessness in the Diaspora. Nevertheless, Holocaust remembrance is a central tenet of Israeli life.

“It’s almost impossible for a Jew to say that the Holocaust isn’t important,” he said. “Israel is obsessed with the Holocaust. Almost all high schoolers visit death camps in Poland.”

Cohen said Israel has the view that “the entire world is against us. While in America, Jews are told that we are the most loved people in the country.”

The lack of American interest in Israel’s economic situation is a significant blind spot, Levitt said. “It troubles me that American Jews have so little understanding of Israeli’s economic troubles. It’s a piece of data that American Jewish policymakers should take notice of.”

Since the first headlines accompanied the study’s release, analysts have been trying to interpret how nearly half of Israeli Jews can favor an Israel without its Arab citizens — if that’s what they were saying.

For Rosner, the finding was more likely Israeli Jews blowing off steam or a cultural tic. The survey was taken between October 2014 and May 2015, after Israel’s war with Hamas in Gaza and before the start of the so-called Knife Intifada.

“I don’t think we should be hysterical about it,” Rosner said, recalling that in 1992, Prime Minister Yitzhak Rabin, who had reached the Oslo Accords with the PLO, said, “It would have been great if Gaza had drowned in the Mediterranean.”

“So not just the [Israeli] right feels a natural sentiment that one feels toward an enemy,” Rosner explained. “It does not mean Jewish Israelis will support an actual plan. But it’s a warning sign about the right way to treat a fellow citizen.”

But Cohen said that finding — along with another in which 79 percent said Jewish Israelis deserve preferential treatment — is “consistent with public policy.”