It wasn’t always easy for Ellie Klein Goldman and Caroline Dorn to keep their identities secret. Especially the many times they were sent the very tweets they had written as the anonymous creators of RogueShul, a parody account chronicling the humorous lives of synagogue administrators.

After a year and a half of tweets about the inner workings of American synagogue life, Goldman and Dorn revealed their identities in a letter last week.

“At synagogues, life and death mingles with mundane every single day. For us, humor was a way to wrestle with that,” they wrote in the letter. “Sometimes, our work feels very tangibly holy and true, and sometimes we spend the afternoon defrosting the social hall freezer and cleaning out 40 year old file cabinets. At the intersection of those realities, we found RogueShul.”

We spoke to the account’s now unmasked creators.

What drove you to start the account anonymously and what did you expect to come of it?

Dorn: We began it just to amuse ourselves. We had no vision that it would become what it did — it was just for us to have fun and to have a place to put all the outlandish stuff that happened every day. And then it just evolved.

Goldman: It was modeled after the rogue Twitter accounts that cropped up after the 2016 election and this funny idea that there were people running around behind the scenes in the White House and government agencies sort of telling the truth. We just wanted to entertain ourselves and maybe a few other people would appreciate it.

Why did you decide to reveal yourselves now? And what’s next?

Dorn: All good things come to an end sometime, and as soon as RogueShul started taking off, we felt that we wanted to be in control of how and when it ended. We didn’t want to be outed, and we didn’t want to be in a place where it was no longer fun or meaningful. And we were starting to get there, like our attention was getting pulled to other places.

In terms of what’s next for us, we are starting a consulting company for synagogues and Jewish organizations that evolved not because of RogueShul but sort of along the same timing. 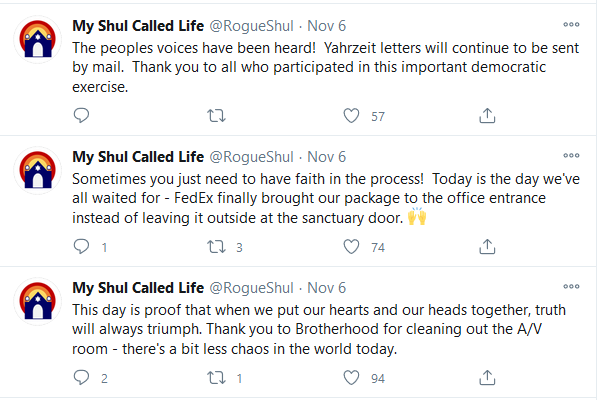 How did the account evolve along the way? What surprised you about it?

Dorn: It was just about snark at first. It was about entertaining ourselves and having a good time, and then there were things that got harder. The world progressed and the past few months of coronavirus, people needed community more than they needed jokes. So we started with a weekly Shabbat shoutout every Friday where we would shout out some group that had had a particularly hard week or somebody who was not appreciated, or some specific part of the world or group of people who needed a little bit of a boost.

Goldman: I think we also, in that Shabbat shoutout evolution, went from kind of snarkily talking about an older person who complained about the rabbi to highlighting the bar mitzvah boy who did something endearing during the service. All of it was made up, but we infused the made-up characters with sweetness and I think for us, we were able to depict what about the work we loved and what fed us. So it became a venue to complain and also this space to really cherish everything that’s beautiful about the work.

Were there any moments that stood out as especially memorable?

Dorn: There was a time when we took a bus of fake “confirmands” to New York City, where we were like, what if we were on a teen trip? We planned it all out, like where they would travel to and from and how they would get there, the places they would go, and it was all just made up, but people were chomping at the bit for more about what they were up to and what went on on the bus. It was all very real and all very fake and that was fun.

Goldman: They went to Ellis Island and did some sort of prayer spontaneous singing.

Dorn: There was a queer storyline on the bus.

Goldman: There was a love triangle on the bus.

Dorn: Then there was also the URJ Biennial, which was a big turning point where we got to interact with people, still anonymously but in person and kind of have a lot of our people in one space and felt like we were orchestrating behind the scenes of this massive undertaking but also operating in secret. We were participants and presenters and really there as professionals, but also had this whole secret life that was happening.

How did you manage to keep your identities secret?

Dorn: We were pretty serious about it. I guess in the last few months we’ve gotten less intense about it, but at the beginning we were cautious to tweet at certain times so people wouldn’t make an assumption about what coast we were on, and we made intentional comments about weather that wasn’t the weather where we were to throw people off. Sort of just trying to divert. As soon as people started to get really interested in who we were, we tried to throw out some red herrings.

How did you come up with all of this?

Dorn: In terms of the storylines, we’re both creative people. I’m a comedian, I’m an improviser, so this is kind of how my brain works naturally to think about what would be funny if … And I think we sort of took that and just applied it to our work and it just fit.

Goldman: I’ve been in the field since the late ’90s, so there are a lot of stories. And we really do love the work, it is endearing and also really annoying! There are a lot of frustrating moments that are catalogued and we finally had a place to put them. There’s no end of material in synagogue life.

What did you learn about American synagogues and how people interact with them?

Dorn: There’s things that we all do that don’t make sense, and when we were able to frame them through a lens of humor, it definitely informed our work in terms of why do we do that, why is this system this way, why do we all put up with this.

Goldman: I wasn’t surprised but aware that lay leaders — we have a lot of lay leader followers also — appreciate the absurdity of some of the work, too. They appreciated the cheeky humor, and I didn’t really think about that. I thought we were staff people living in a bubble. There were a lot of synagogue board members who commented as well, which was nice.

We were also able to give praise to made-up people, like the shoutout to the temple president who fields everybody’s complaints and has to sit through both Yom Kippur services and never complains about it. So temple presidents all over the place got to hear a thank you, and some of that was amplified by other people retweeting or commenting. And the same thing with rabbis and cantors and youth directors and everybody.

Do you have any takeaways for synagogues starting to think about how they move into the post-pandemic future from this community you’ve built online?

Dorn: I would like to reiterate to everybody that the best resource we have is our people. The caliber of talent that we have, the excitement from board and lay leaders and staff members to create something amazing, those resources are all more valuable than buildings and budgets and programs.

Goldman: I think there is life in synagogues, and I have always been but I continue to be disinterested in having conversations about the downfall of American synagogue life. I just don’t believe it. There are too many people who still find value and meaning and connection in what we have created in synagogue centers.