What started as a creepy one-time sighting in the woods of South Carolina has turned into a public safety issue for area Jewish and public schools as they address the proliferation of creepy clown sightings and clown-related threats made on social media.

“We’re aware of [the situation] and our director of security was in touch with principals, and counselors,” said Malkus. “Our students have heard about it, and it has been a topic of conversation, and among a small group of students, concern.”

Malkus, along with three other heads of Jewish day schools in Maryland, Virginia and Washington, said they have not had clown-related threats made against their schools or students.

In the run-up to Halloween, reports of sightings of people wearing clown masks or dressed as clowns threatening children have alarmed parents, school officials and police. The reports that started in South Carolina have spread to other states and include clown-related threats on social media.

At the student level, discussion about the issue has varied among schools.

Aliza Graber, a school counselor at Melvin J. Berman Hebrew Academy in Rockville, said one student had confided in her worries about the clown threats.

Graber is addressing concerns by helping students create plans for what they can do in an emergency, as well as reminding them to taking safety measures such as walking on populated streets.

She added that some students at her school dismissed the clowns as a joke.

Regardless, Graber added that “it’s good to create this awareness” of one’s surroundings.

Social media threats have been made against public schools locally. Montgomery County police arrested and charged four 13-year-olds on Oct. 5 in connection with threatening posts and photos of clowns made on the Instagram photo-sharing website, The Washington Post reported. Similar threats and arrests were made in Prince George’s County.

Montgomery County Public Schools issued a statement the next day saying it is working with police to monitor the situation.

Going clown sighting has become a pastime at the University of Maryland, College Park. University police warned students against perpetuating what they called a nationwide hoax, the Diamondback student newspaper reported.

Jennifer Milhiser, a freshman at U-Md., said: “The clown thing is huge here. It’s pretty much just a joke.”

She described going “clown hunting,” where she and another student took a baseball bat “ready to swing it if we see any clowns.” 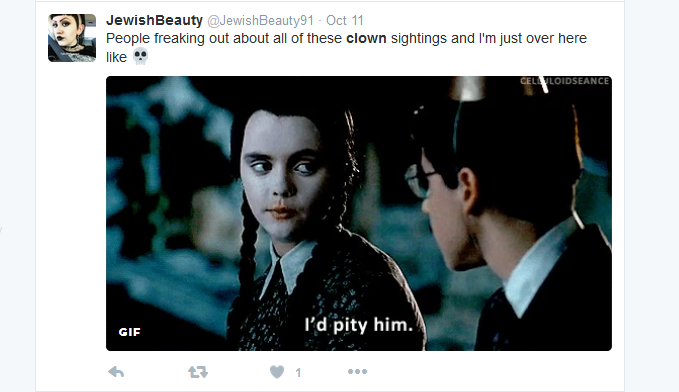 “There’s a lot on social media: ‘I saw a clown over there.’ ‘Don’t go as a clown for Halloween,” she said.

The sudden dive in the popularity of clowns has led some businesses to rethink their Halloween merchandise.

“Given the current environment, we have made the decision to remove a variety of clown masks from our assortment, both in stores and online,” Target spokesperson Joshua Thomas told CBS Minnesota.

“McDonald’s and franchisees in the local markets are mindful of the current climate around clown sightings in communities and as such are being thoughtful in respect to Ronald McDonald’s participation in community events for the time being,” the company said in a statement to the Associated Press.

The phenomenon appears to have started in late August when children in Greenville, S.C., began reporting that groups of clowns were attempting to lure them into the woods, The New York Times reported.

Despite the sightings popping up across the country, master horror novelist Stephen King doesn’t seem to be worried.

On Oct. 3, he tweeted: “Hey, guys, time to cool the clown hysteria — most of [them] are good, cheer up the kiddies, make people laugh.”