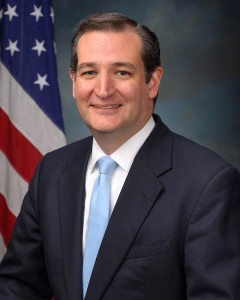 First term Republican senator and conservative firebrand Ted Cruz of Texas kicked off the 2016 GOP presidential primary race Monday, becoming the first among a lengthy slate of Republicans expected to officially announce a bid for the party’s nomination.

Speaking before a large gathering of students at Liberty University — a Christian institution in Lynchburg, Va., founded by the late televangelist Rev. Jerry Falwell — Cruz delivered a fiery speech that mixed policy positions with numerous invocations of his Christian faith.

“God’s blessing has been on America from the very beginning of this nation, and I believe God isn’t done with America yet,” said Cruz, joined by his wife and two small children. “I believe in you. I believe in the power of millions of courageous conservatives rising up to reignite the promise of America, and that is why today I am announcing that I’m running for president of the United States.”

Cruz aimed to set himself apart from the rest of the field by pitting himself against the Republican establishment and branding himself a champion of faith-based voters. True to this anti-establishment tone, Cruz decided to skip forming an exploratory committee, a traditional precursor to announcing a presidential run. He alerted the press and his supporters about the speech via Twitter.

While many presidential candidates kick off campaigns in their hometowns, home states or an early primary or caucus state, Cruz’s choice of Liberty University sent a clear signal that his strategy is to reignite the religious right, a once powerful movement that has been sidelined in recent elections in favor of a more libertarian style of conservatism that emphasizes fiscal ideals over religious values.

Although Cruz has been praised by Republican Jewish donors for his vocal support for Israel, the predominant belief is that Cruz’ establishing himself as one of the most conservative members of the Senate makes him too conservative to be electable in a general election.

Additionally, his theatrics on the Senate floor have earned him detractors within his own party.

“The Republican party and the American people have to be able to find a more qualified candidate for president than Ted Cruz,” Rep. Peter King (R-N.Y.) wrote on social media Monday. “Shutting down the federal government and reading Dr. Seuss on the Senate floor are the marks of a carnival barker, not the leader of the free world.”