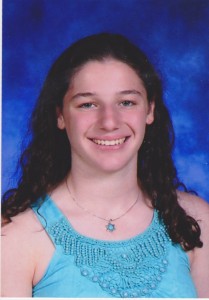 On Saturday, Crystal Kaitlyn Bridge, daughter of daughter of Tina and Andy Bridge of North Potomac, will become a bat mitzvah at Temple Beth Ami in Rockville. Family members joining in the simcha include her brothers, Harrison and Mitchell, and grandparents Natalie Goldberg of Boynton Beach, Fla., and Sam Levy of Rockville. Crystal is also the granddaughter of the late Norma Levy and the late Arthur Goldberg.

Crystal will be symbolically twinning her bat mitzvah with Jacques Wisznia from Paris, France, who was deported at the age of 5 in 1943 and perished during the Holocaust.

For her mitzvah project, Crystal is using part of her bat mitzvah money to purchase sweat shirts and sweat pants for wounded soldiers at Walter Reed National Military Medical Center, in honor of everything these soldiers have sacrificed to protect our freedom.  Crystal is a seventh-grader at Cabin John Middle School in Potomac.