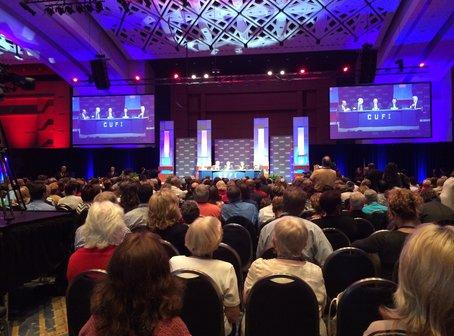 American Jews are not the only ones flocking to Israel’s side in this difficult time.
Christians United for Israel (CUFI) held its 9th annual summit at this week, issuing appeals to Congress to impose sanctions on Iran and urging its members to support Israel’s war on terror.

“We gather in D.C., as the winds of war are blowing over the nation of Israel and sacred city of Jerusalem. For Zionism’s sake we will not keep silent and for Jerusalem’s sake we won’t,”
Pastor John Hagee, CUFI founder and national chairman told the 5,000 attendees who packed the Walter E. Washington Convention Center Monday.

But it was Israel’s existence that became a dominant theme of the gathering; numerous speakers took up the issue of Iran’s existential threat to Israel, including James Woolsey, the former CIA director. “We have a serious problem with Iran,” he said. “Many Americans don’t understand it, many don’t get it and many don’t want to get it,” he said.

The Iran nuclear negotiations deadline has been pushed back until November 24, 2014.

“If Iran goes nuclear, we are not going to be able to take them away. Israel will be
imperiled, and other nations will feel like they need nuclear programs” as well, in addition to the countries already having them, said Bill Kristol, editor of The Weekly Standard and a regular political analyst on Fox News. “This is a terrifying thought and will make our dangerous world infinitely more dangerous.”

David Brog, the Executive Director of CUFI, turned to another existential threat to Israel—Hamas.

“They fire missiles at Israeli civilians, areas crowded with Palestinian civilians.
Israel warns Gazans to evacuate areas and Hamas sends civilians back to those zones,” Brog said. “Hamas has one goal, and that is luring Israel in and bringing Israel in to kill civilians.”

Since the start of Israel’s Operation Protective Edge, more than 1,000 rockets have been shot and aimed at Israeli cities and neighborhoods from Gaza.

“Two-thirds of Israelis have run to the bomb shelter. That is the U.S. equivalent to 200 million people,” Hagee said. “Let the IDF finish the [conflict] that Hamas started.”
He added: “We cannot in good conscience ask Israel to [endure this] in order to appease the U.N.” and other world organizations.

Kristol agreed. “Israel does not need a mediator, Israel needs a friend and an ally. Kerry should be traveling to show support [in his upcoming visit to the region] and not to go with a stance of moral equivalence and trying to negotiate.”

Kristol, who served as chief of staff to Education Secretary William Bennett during the Reagan administration and to Vice President Dan Quayle during the George H.W. Bush administration, saluted the work of CUFI and urged the attendees to “remind the American public that when we stand for Israel, we stand for our own best principles.”