Journalist Emily Tamkin’s comprehensive dive into the influence of George Soros is coming out into a very different world than she thought it would be released into.

When she started, following the election of President Donald Trump, conspiracy theories about Soros were beginning to make the leap to mainstream in the United States.

More recently, far-right conspiracy theorists have also blamed the 89-year-old Jewish billionaire philanthropist for the Black Lives Matter protests — he is paying protesters and “funding antifa,” they say — and the coronavirus pandemic. Anti-Semitic conspiracy theories about Soros have reached new heights, with half a million negative messages flooding Twitter every day last month, according to an Anti-Defamation League analysis. World leaders, including Trump, have amplified them.

That means Tamkin’s book, “The Influence of Soros: Politics, Power, and the Struggle for an Open Society,” is arriving at a fortuitous time. Of course, the New Statesman editor said, there would never be a bad time for a book explaining some of the most durable anti-Semitic tropes of our time.

What surprised me the most was how recently the Soros conspiracy theories, or as you call it “Soros-as-bogeyman,” really entered the mainstream. For some reason, I thought it had been around for decades.

It’s both, right? It has been around for decades. In the 1990s, you do have leaders of European countries who are not fringe figures talking about it.

Yes, true. It just struck me when you write about how much the conspiracy gained momentum in 2015. Can you expand upon why you think 2015 was such a turning point for the spread of the Soros conspiracy theory?

It’s a confluence of factors. One, it was the introduction of certain American political actors, namely Arthur Finkelstein. [Finkelstein, who died in 2017, was a conservative political strategist.] When people say, “Oh, wow, these conspiracy theories are the same in all these different countries,” in some cases, that’s because you literally have the same people working in these different places.

Two, it’s that you have people — specifically in Central and Eastern Europe — realizing that the European Union and the promised democratic liberal project was not going to give them everything that they had thought it was going to give them. For that reason, people are disaffected, they look for leaders who will play on that disaffection, and those leaders, in turn, need to do something because they can’t actually make it all better. In [Hungarian Prime Minister Viktor] Orban’s case, rather than attacking the political opposition, which would have only built up that political opposition, he attacks George Soros. 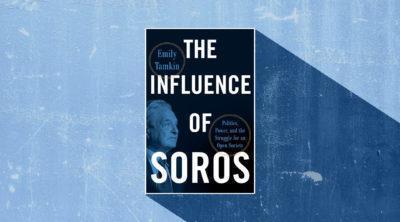 The [third] reason that I think 2015 specifically is such a turning point is that you have a migration crisis in Europe. Balint Magyar, who’s quoted in the book, is this sociologist [who] was in the pre-Orban government. And the way he put it to me is that the perfect “other” is not a liberal professor. The perfect other is a migrant. If you can have this famous, hated figure onto whom everyone can project their own prejudices and blame him for this uncertainty and the entrance of these people who you’d rather not have in your country, and you can vilify [those migrants] in the process, your political situation becomes much stronger and you can distract from some of the realities on the ground in your country. And you can distract from your own alleged corruption and you don’t need to build up any of your political opposition.

What was so interesting to me was that Arthur Finkelstein is a Jewish political strategist who is responsible for Orban and so many leaders’ embrace of the anti-Soros campaigns. How do you understand that?

I think that it speaks to two things. The first is that there are some people who point to this part of the story and say, “Well, it just goes to show that it’s not really an anti-Semitic conspiracy theory. It’s just an opportunistic conspiracy theory.” And to that I would say if you are willing to use anti-Semitism because of opportunity, then you are comfortable with anti-Semitism, which I would invite you to think perhaps means that you are an anti-Semite.

And the second thing is that Finkelstein had first worked with [Israeli Prime Minister Benjamin] Netanyahu. There’s a really important element to the story, which is that Israel also deals in these anti-Soros conspiracy theories. Soros has a very different understanding of what it means to be Jewish than Israel does. His Jewishness is not wrapped up in the State of Israel.

For him, it’s more about universal human rights and universal values, and it’s not about support of the Zionist project.

Going back to the reasons for the rise of Soros conspiracy theories in 2015, you write in the book that “the idea of the Jew bringing in immigrants is, in a certain sense, the most perfect antisemitism.”

Let’s think about the reason that a Jewish person would want to “invade a country with foreigners.” What you’re saying is that Jewish American, that Jewish Hungarian, that Jewish whatever, is not really of that country — and that’s why they’re trying to undermine it. It’s the idea of perpetual otherness that you’ll never really be of this place, no matter if you’re from there, no matter how many years you’ve spent there — there’s nothing you can do.

The idea that it’s the Jew who corrupts the nation, either through his own being or by adding people from another place — not considering that these people are fleeing some of the most horrific experiences known to humankind, but that they’re being brought in because the Jew is trying to corrupt the nation — that is just, in my mind, powerful anti-Semitic sentiment. It’s the otherness, but it’s also the element of the puppeteer: The idea that there is anybody who’s bringing these people and they’re not, of their own agency and of their own will, fleeing.