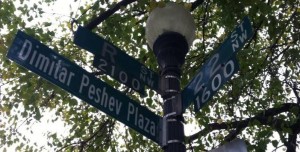 The street in front of the Bulgarian Embassy now will be called Dimitar Peshev Plaza, in honor of the man credited with halting a mass deportation of Jews, thereby saving 50,000 people.

“Needless to say, this is a big thing, said the ambassador, who called the street naming the first recognition in the western hemisphere of a Bulgarian as a hero.

In March of 1943, Peshev, who was the deputy speaker of the Bulgarian Parliament at this time, heard about a deportation order and decided that he would stop it at all costs.

He rushed to the capital city of Sophia on March 9, 1943, equipped with a petition signed by 43 members of the government, and went to the Ministry of the Interior to beg officials to halt the deportation orders. He refused to leave that office until every deportation center in the country was contacted and everyone released. By the end of that day, the order was cancelled. Historians have since credited him with saving close to 50,000 people.

Peshev also tried to stop deportations of Jews in northern Greece and Macedonia, but without success.

Because of Peshev’s actions, he was stripped of his position as deputy speaker and kicked out of Parliament. A year-and-a-half later, the Soviet-back Communists took over the government. Peshev was tried as a war criminal and sent to jail. One of his crimes was being anti-Semitic. Before he died, Peshev had lost his home and his right to hold a job. He lived for about 30 years in poverty and obscurity until his death in 1973.

Peshev is credited with saving the second largest number of Jews during World War II and was awarded the title of Righteous Among the Nations.
His is a story of making choices and tolerance, Poptodorova said during a phone interview. “His story is particularly relevant today. He absolutely made the right choice. He risked everything, his career, his life.”

Council chairman Mendelson noted that it is not uncommon to name a D.C. street after a hero, and then went on to list numerous Civil War generals and admirals who have streets named in their honor along Wisconsin Avenue.

Mendelson believes Peshev deserves the honor, noting, “Peshev is not a perfect person. But at that moment, he stood up against the deportation and forced the government to pause. In return, he was dishonored and died in poverty and obsurity.”

As for Bulgaria itself, Mendelson said, “There is no question that Bulgaria has a mixed history when it comes to the Jews in World War II.”
Glick, a former commissioner on the D.C. Advisory Neighborhood Board Commission, learned of Peshev’s doings 19 years ago when he was in that country for a short time. He wandered into an antique store where “I found the yellow star, and I bought it for like eight dollars.”

Later, at a synagogue he visited, he asked someone about that star. Glick recalled that a man told him, ‘This is exactly what I wore when I was a boy.’ The man then took the star and placed it over his heart, Glick recalled. That man went on to tell Glick how Bulgaria, an ally of the Nazis, survived the war with no deportations, claiming that while some Bulgarians were sent to labor camps, none went to death camps.

This left a huge impression on Glick, who decided he wanted to spread the word. Many years later, he took action, first before the neighborhood commission and then to city council. Now, 70 years after Peshev’s actions, his actions are being honored in America.