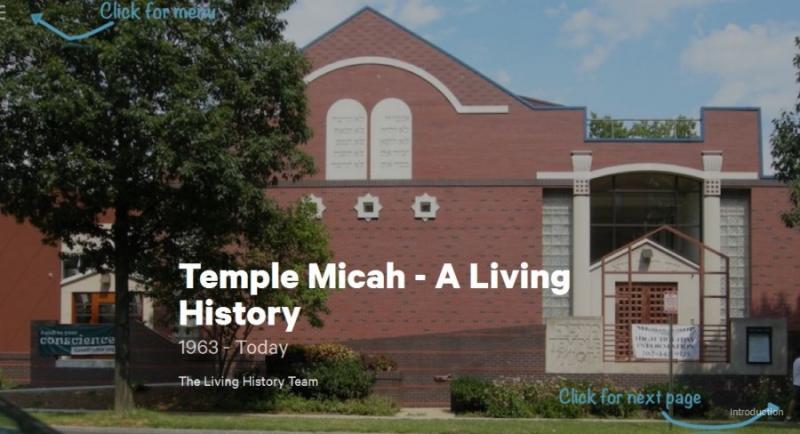 Call it a midlife crisis. “Temple Micah is 52 years old now and is in danger of losing some of its memories,” Mary Beth Schiffman told the Washington congregation’s board in January.

No, the Reform temple wasn’t suffering a middle age moment. What concerned Schiffman and others on the recognition task force that she co-chaired was the loss of institutional memory at Micah.

“Since we are now over 50 years old, many of the founding members are deceased or in failing health,” says temple member David Diskin. “It is important to talk to as many of them as we can while we still can.”

Diskin leads the project the congregation came up with to preserve its memories. “Temple Micah — A Living History,” is a website “that includes narratives, interviews, still pictures and videos, lists, charts and statistics to recount the Micah story,” according to the site’s introduction.

The project, which is still being roughed out, is part history and part recognition of members who have contributed to life at this synagogue with its do-it-yourself ethos.

A tour of the site shows 18 sections, each dedicated to an aspect of synagogue life: history, education, worship, social justice. A section called “The Micah Way” explains the congregation’s ethos. “Born in the 1960s, we are congenitally egalitarian,” it says.

Viewers are encouraged to offer corrections and make suggestions. After feedback, Diskin added a section about couples who met and married at Micah. He also wants to include a “Story Corps”-type feature, where members talk about their memories.

The “Serving Micah” section will list the congregation’s volunteers, from presidents to oneg coordinators. The synagogue doesn’t post plaques to recognize donors or other members, Diskin says. The legacy project is a way to do that.

“Origins” includes video of a 2012 interview with Ted Schuchat, Temple Micah’s first president, in which he talked about the congregation considering meeting in a ferry boat on the Potomac. He also recalled the vote to affiliate with a Jewish movement. Reform won by one vote.

Another goal of “Temple Micah — A Living History” is to be a resource, not just a storehouse.
“The audience is our current and future members as well as prospective members who want to know about our history,” Diskin says.

Adds Schiffman, “We want to capture these memories before they disappear, so they are permanent and accessible, not another book on the shelf.”

The site will be released to the public in the spring, Diskin says. But no one should expect to see a finished project.

“We will keep plugging away — for example a member recently stepped forward to work on gathering membership growth data since 1963. The site will be updated continually after the first release,” he says. “We will never be totally finished, because it is a living history.”