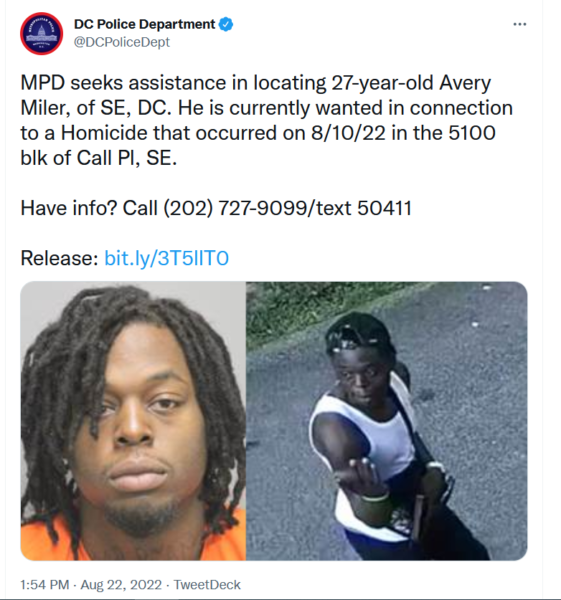 D.C. Metropolitan Police have released the name and photos of a suspect wanted in the Aug. 10 murder in the District of Aryeh Wolf, 25, a Baltimore resident.

According to police, the suspect in this case has been identified as 27-year-old Avery Miler, of Southeast, DC. He is wanted on a DC Superior Court arrest warrant charging him with First Degree Murder While Armed (Gun).

Anyone who knows the whereabouts of Miler, or who has knowledge of this incident should take no action but call police at (202) 727-9099 or text your tip to the Department’s TEXT TIP LINE at 50411. The Metropolitan Police Department currently offers a reward of up to $25,000 to anyone who provides information that leads to the arrest and conviction of the person or persons responsible for a homicide committed in the District of Columbia.

On Aug. 10, members of the Sixth District responded at 3:41 p.m. to a reported shooting at 5100 block of Call Place, Southeast.

“Upon arrival, members located an adult male suffering from an apparent gunshot wound. DC Fire and Emergency Medical Services responded to the scene and transported the victim to an area hospital where after all life-saving efforts, the victim was pronounced dead,” the police report stated.

Multiple news outlets reported that he was working in the city, installing solar panels, when he was shot in the back.

The assailant “walked up, produced a handgun and shot multiple times,” Capt. Kevin Kentish, a supervisor in the homicide unit, told The Washington Post. “It does not appear that anything was taken from the decedent.”