That’s because she’s a robot.

Called ROSA, short for Robotic Surgical Assistant, the diminutive white-and-blue robot already has proved her value in the operating room. Since ROSA’s arrival last year, thanks to a grant from USAID’s Office of American Schools and Hospitals Abroad, she has helped Hadassah replace the knees of 20 patients.

“Our preliminary impression is that surgery with ROSA is better — we see the clinical benefit,” said Prof. Meir Liebergall, chairman of the hospital’s orthopedic department. “Robots are good when you need to do repeated motions, but not only that. The robot assists the surgeon, creates some dialogue about decision-making and improves performance.”

For example, ROSA might warn surgeons that if they cut the bone at a 5-degree angle it could prevent proper alignment of the leg, while a 3-degree angle will result in better positioning of the artificial implant.

“ROSA doesn’t do the work instead of me, but brings me to the right position,” said Liebergall, whose department performs more than 300 knee replacements annually. “It guides me where to cut the bone and at which angle — and it gets that information from the patient’s anatomy.”

Robotic surgery is nothing new at Hadassah. For the past 15 years, Hadassah doctors have used the ACMazor Robotics Renaissance Guidance System to place screws in patients’ spines with added safety and precision. Another robot, Siemens’ Artis Zeego, provides real-time 3-D imaging during operations, eliminating the need for pre-surgery CT scans and post-surgery X-rays.

“We’ve inserted thousands of screws using this technology. It’s one of our best friends in the operating room, and it’s 99% accurate,” Liebergall said. “Usually, the robot doesn’t make mistakes, but problems sometimes occur. We know when to give up and go back to the old way.”

Robots are also lending a hand — or, rather, a mechanical arm — to the essential testing for COVID-19 that Hadassah Hospital has taken on. To help during the coronavirus pandemic, Hadassah has deployed robotics to address the sudden, massive need for urgent analysis of blood samples for COVID-19.

“We had to move from tens of samples a day to thousands,” said Dr. Asaf Gertler, clinical laboratory director at Hadassah Medical Center’s Ein Kerem campus. “Without robots, this would have been impossible.”

The rooms in which he works hold millions of dollars’ worth of machines made by Roche, Tecan and Qiagen. In all, Hadassah employs eight types of robots just to extract the RNA of the virus; each one uses different substances.

“From our point of view, any instrument that frees us from performing manual processes and instead does them by itself is a robot,” Gertler said. “It’s more accurate, it’s repeatable, it’s always the same and it doesn’t get tired.”

In the old days, Higazi’s lab would receive blood samples in a glass or plastic tube, accompanied by a written request listing which tests were to be performed. After doing the tests, lab technicians would send a printout with the results back to the department that requested the test.

Now, a physician enters the necessary tests into a computer, which produces a bar-code sticker. When the tube arrives at the lab, a robot sends it to a centrifuge, where it is opened, forwarded to another machine for analysis, resealed and finally sent to the archives — in the event a physician decides to do an additional test.

“You don’t have to touch the tube,” Higazi said. “It does everything by itself.” 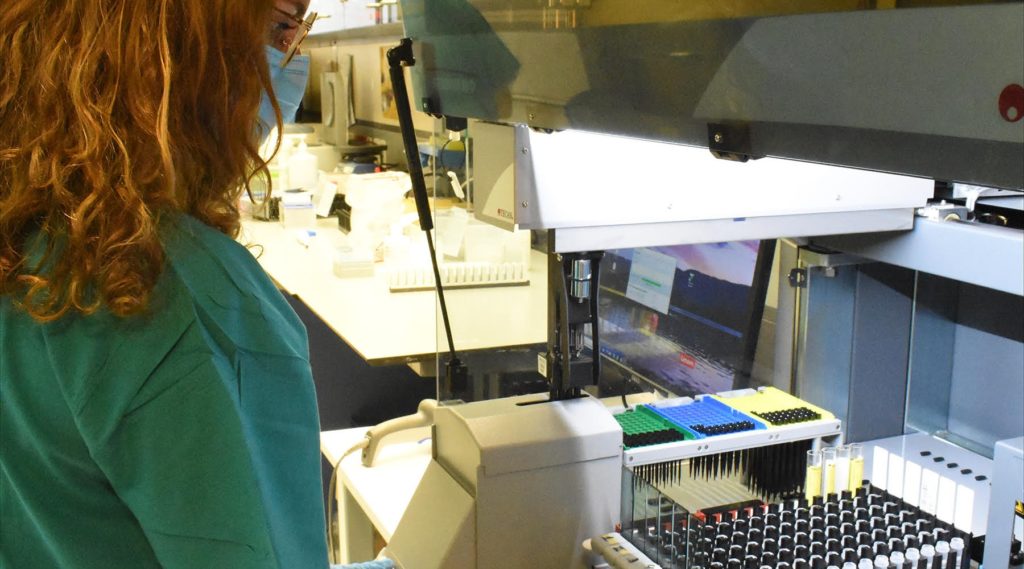 Robots can handle 95% of all required tests, according to Higazi, with a few exceptions, such as antibody tests for neuroimmunology. Hadassah’s lab now processes about 600 samples per hour, or about 4 million a year.

“In the future, we hope to automate all serological tests and free up human resources,” Higazi said. “When everything is automated, the possibility of mistakes is close to zero.”

Hadassah’s robots have been particularly useful to spine surgeons. Dr. Josh Schroeder, a spine surgeon at Hadassah’s Mount Scopus campus, does 10 to 15 surgeries a week; three or four of them generally involve robots. A recent one was on a Palestinian construction worker from the West Bank who had fallen from scaffolding, breaking eight ribs and smashing his vertebrae.

“With the robot’s help, we did micro-incisions and healed his entire spine,” Schroeder said. “Robots can bring you to places you can’t see with the bare eye.”

This is especially the case with surgeries to correct deformities, where the anatomy isn’t always clear. For example, for children with spinal muscular atrophy — an often-fatal genetic disease that causes a severe curvature of the spine — robots allow the insertion of corrective screws without having to open up the child’s entire skin, a surgically risky procedure.

“Instead of doing huge cuts on the child’s back, we do many small cuts in order to reduce surgical complications,” Schroeder said. “The robot brings you into the perfect trajectory to put a screw into the spine. Either I expose the entire anatomy to figure out where the spinal cord is, or I can use the robotic technology to bring me to that site without actually seeing it.”

Schroeder likened robotic assistance to “the difference between driving an autonomous car with your eyes closed, or looking at the road every second.”

In April 2017, he and Professor Leon Kaplan, head of the spine surgery unit at Hadassah Ein Kerem, performed the world’s first-of-its-kind dual robotic surgery utilizing the Zeego robot and the Renaissance. And about a year and a half ago, the hospital “created a dialogue” that enables the two robots to essentially talk to each other.

“In small kids, definitely those with deformity, the spine is constantly moving, and you’ve got to constantly look at what you’re doing,” Schroeder said. “So the use of the second robot gives us real-time imaging as we’re moving along to make sure we’re still in sync.”

Schroeder said he doesn’t see any downside to using robots, as long as they don’t malfunction.

“We’re not yet at a place where robots can replace us, because they’re not 100% safe. But technological enhancement to human hands is phenomenal,” he said. “I think as robotic technology evolves, it’s going to become a major part of our everyday medical practice.”

This article was sponsored by and produced in partnership with Hadassah, The Women’s Zionist Organization of America, Inc., which is celebrating the 100th year of Hadassah Medical Organization, the Henrietta Szold Hadassah-Hebrew University School of Nursing and the Hadassah Ophthalmology Department. This article was produced by JTA’s native content team.