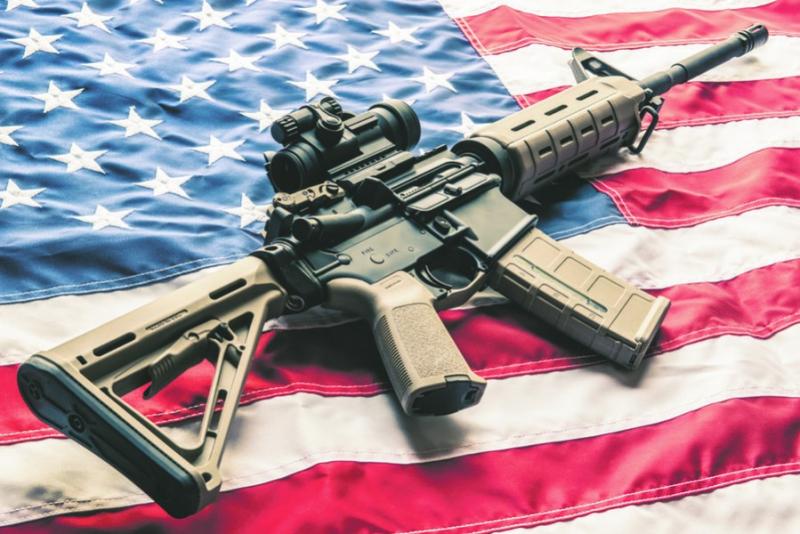 Members of the political, communal and rabbinic arenas are reviving their rhetoric about guns since the June 12 mass shooting that killed 49 people in Orlando, Fla.

“There was no reason why the man who committed that act of terror in Orlando should have been able to get his hands on [an assault weapon],” said Ron Halber, executive director of the Jewish Community Relations Council of Greater Washington. He was referring to killer Omar Mateen’s purchase of a Sig Sauer MCX assault weapon two weeks before the shooting.

He said that his agency is not calling for a ban on firearms used for protection or hunting. But, he said, the elimination of “military-grade” weapons from the public’s possession is a rational step.

On Monday, the Senate voted down four gun-control measures. With elections in November, the House of Representatives isn’t expected to consider the politically sensitive issue.

Area rabbis are under no such limitations, and they are speaking out about guns.

“When the consequences are life or death we have an obligation to fight as hard as we can for policies that preserve life and dignity,” said Rabbi Aaron Alexander of Adas Israel Congregation in Washington. “We’re going to have a voice, and our voice is not just going to be to scream or yell or pray. Our voice is going to be to change tragedies that happen in this country every day.”

Speaking before Monday’s Senate vote, Alexander said it was “shocking” that Congress took no action related to gun legislation after the Sandy Hook shooting. He called last week’s 15-hour filibuster by Senate Democrats on gun control a “God-inspired act.”

“Sometimes we get so bogged down in the intricacies of the Second Amendment, we’re no longer able to see beyond the forest to the bigger picture,” said Alexander, whose synagogue hosted a community memorial on June 16 for victims of the shootings at Pulse, a gay nightclub in Orlando.

Two sides to the debate

Gun control is a matter for American law. But rabbis often look at the matter though the lens of Jewish law and tradition. Rabbi Ariel Sadwin of Agudath Israel of Maryland, a haredi Orthodox organization, said that like with many hot-button issues, the Orthodox community sees merit to both sides of the gun-control debate

Alexander said the Torah does provide a case for owning a gun by spelling out a right to self-defense. But he said the most well-intentioned gun owners can cause devastating side effects simply by being enablers.

“If you think about domestic violence and suicide, a gun in the home raises the possibility that someone will do harm to themselves or others,” he said.

The case for gun ownership does not come from the Torah, but from the Jews’ history of persecution, explained Edward Friedman, the editor-in-chief of the NRA magazine Shooting Illustrated.

“Part of what made me a believer in the Second Amendment was what the Jewish people have gone through and the fact that we were, until the creation of the State of Israel, actually until the creation of the United States, never able to protect ourselves,” he told Washington Jewish Week last year. “In the U.S., it is individually, and in Israel it’s more collectively. …There are people out there who spew violent hatred toward Jews and all too often put that into action.”

The right to keep a handgun in a residence has been upheld several times by the Supreme Court, including in the 2008 decision District of Columbia v. Heller, in which the court determined 5-4 that banning the registration of handguns or requiring the use of trigger locks to store them in the home violated the Second Amendment. The late Justice Antonin Scalia wrote the majority opinion.

Nate Lewin, a Washington attorney who has worked on a number of Supreme Court cases and knew Scalia, said he thinks there are limits on the latitude that the Heller decision gives gun owners.

“Beyond [handguns], I think courts have construed that as meaning that the legislature has the authority to go and regulate other forms of purchases of forms of guns and ammunition,” he said.

Lewin said he thinks measures such as background checks and an assault weapons ban are permissible under the Constitution.

While these measures may withstand legal tests, there may not be the political will to enact them, Lewin said, noting the powerful influence of the National Rifle Association on the political sphere.

“Although I’m not generally sympathetic to a lot of things the Obama administration supports, I think legislation in this area is desirable,” he said. However, he said he thinks the larger issue is “Islamic terrorism.”

The battle in Maryland

Maryland is fighting its own legal battle to uphold an assault weapons ban enacted in 2013. The law, based on an expired federal law, outlaws 45 types of weapons including the AR-15, which is similar to the weapon Mateen used in Orlando.

Maryland’s ban faced its first legal challenge from the pro-gun community in 2014 and was upheld by U.S. District Court Judge Catherine C. Blake. But in February, ban opponents appealed the decision to the 4th U.S. Circuit Court of Appeals, which ruled by a 2-1 vote that the case should be reheard in the same lower court using the “strict scrutiny” standard, meaning that the ban must “further a compelling governmental interest” in order for it to trump the Second Amendment.

“There are clear definitions as to what an assault weapon is in the law,” Frosh said. “If somebody brings us a case where you’ve got an AR-15 that’s sold in a store to someone who’s not buying it for police purposes or military purposes, it’s a violation. The idea that you need to be able to fire off 15 shots really fast for hunting is crazy. It’s not necessary. It’s not sportsmanlike.”

Frosh said anyone carrying a banned weapon into Maryland from another state is subject to the same penalties as someone who obtained one illegally in state, which include a $5,000 fine and a prison sentence of three years or less for the first offense.

State Sen. Bobby Zirkin (D-District 11) helped craft the assault-weapon law. He regrets not including a mental health component, which he said is “very hard to legislate.”

“You want to people to seek mental health counseling, but at the same time you want to keep guns out of the hands of people who have the capacity to do harm. How you define that prohibition is very challenging but important to do,” he said.

Zirkin also co-sponsored a bill that would have barred gun sales to suspected terrorists — something he thinks is seriously lacking at the federal level.

“You look down at Washington and their failure to do even the most simple things is embarrassing,” he said. “This is a no-brainer of an issue in my opinion. You have somebody on a terror watch list, they shouldn’t have firearms.”

Adding to the problem, Zirkin said, is the lack of communication from the FBI to state and local police about who is on the watch list. He said it is “self-evident” that police officers should have access to the list.

Montgomery County Sheriff Darren Popkin said he, too, thinks the ban is in the public’s interest. Popkin, an Olney resident who attends Washington Hebrew Congregation and has been in the Sheriff’s Office for more than 30 years, said the community he is in charge of is generally safe. But it has seen its share of gun violence, including shootings near Westfield Montgomery Mall this year. Its tactical team was also called into action during the sniper attacks of 2002 that left 17 people dead, including six in Montgomery County.

“For anybody to think that an active shooter situation could not happen in our backyard is being naïve,” he said.

You Should Know… Jack Green