They belonged to drag queens Miss Buffy Wilde and Cherry Snow who read, sang, danced and “yaas”-ed their way into the hearts of the 70 kids sitting in front of them. The family-friendly drag show, called Drag Queen Havdalah, closed out Shabbat with the message that kids should feel free to be who they are and accept others for who they are.

The decision to have the show in the sanctuary was meant to show that sacred spaces are meant for everyone, said Rabbi Rachel Ackerman.

“The fact that we could do the performance on the bimah is not just welcoming,” she said, “but a validation that we all belong here.”

But before the performance, the kids and their parents had to doll themselves up. The Reform synagogue had set up tables where kids — ranging from toddlers through elementary school age — could make jewelry, design costumes, have their hair colorfully (and temporarily) highlighted and get their nails and faces painted.

Many had already donned their preferred costume. There were several kids in princess dresses, a handful of superhero outfits and even one mom in her own Wonder Woman costume.

There was a girl in her princess dress, tiara and newly designed cape. And a boy with his Batman shirt, bat mask and newly painted nails. The parents joined — or were pulled — into the fun and several left wearing decorated crowns or styling painted nails.

The queens joined the craft room shortly before the show, posing for photos and high-fiving the kids brave enough to approach. One boy, bedecked in a black sequined skirt and long scarf, walked up to Miss Buffy Wilde, waved shyly and ran away before she had time to compliment his outfit.

A drag show is usually a bawdy affair, but these queens kept it PG-rated, sticking to a message of self-expression and acceptance. They read two books on these themes — “It’s Okay to Be Different” and “Not Every Princess” — danced to a couple songs and led the kids in a singalong of a drag queen version of “The Wheels on the Bus.” The song was a crowd-pleaser, with lines like, “The heels on the queen go click, click, click” and “The nails on the queen go brush, brush, brush.”

“There, now you all are drag queens,” Miss Buffy Wilde told the kids after the song to applause.

The queens taught the kids one more drag word: mug, which is your face once all the makeup is on. The kids then got to create their own mug by decorating masks. Miss Buffy Wilde and Cherry Snow then had a long line of tiny admirers waiting eagerly for drag queen approval of their mugs.

A family-friendly drag show is an unconventional event for a synagogue, Ackerman said. Co-sponsors included GLOE, a Jewish LGBTQ group, and PJ Library. Ackerman said she received a couple of emails voicing concern about the event, but otherwise the response was positive. 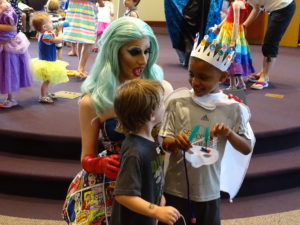 Eight-year-old Julian Reader, who had created a sword and shield for himself at the costume table, said “everything” was his favorite part of the program. His sister Eleanor, 5, declared the same.

Their parents, Rabbi Jordana Shernow-Reader and Luke Reader, appreciated the positive message of the event.

“I thought it was a great message,” Shernow-Reader said. “It’s so important for kids to be proud of themselves, whoever that is.”

Jessica and Jesse Escobedo brought their children, Eva and Zack. The family had a great time, the parents said, but more than that the event inspired family discussions about self-expression and being different.

Zack, bedecked in his superhero costume and bear-themed mug, thought the whole thing was awesome.