Donna Lewis says that deadlines save her life. Repeated, unbending deadlines. The equivalent of two deadlines a day, every day. That’s her commitment for pumping out her comics “Reply All” and “Reply All Lite.”

“[These] 14 deadlines basically keep me from killing myself,” says Lewis, 57. “I know it sounds funny, but drawing cartoons is literally my therapy.”

Lewis’ work has appeared in The Washington Post since 2011. “Reply All” follows Lizzie, a single, career-focused woman who’s simultaneously confident and insecure. Lewis says a lot of the humor comes from the contradictions and absurdity she finds in everyday life. In one panel, the perpetually harried and self-critical Lizzie is depicted meditating. A thought bubble reads, “Come on enlightenment.”

“I think that, especially here in the Washington area, attaining enlightenment is a competitive sport,” Lewis says. “And people want it now and they want to be the best at it. They want to put it on their resume, and maybe that’s a little contraindicated.”

Lewis, a Washington resident, keeps a running list of funny lines she hears her friends and family say to use in her comics. Her art is “just the craziness coming out of my head and onto the drawing pad.” Lewis, who is also an attorney working in the federal government, spends about 20 hours a week working on “Reply All.” She draws throughout the week, but only crafts the punchline right before deadline. Lewis says the added stress makes her work edgier.

“There’s something about that pressure that just makes the funny stuff funnier,” Lewis says. “Wish it weren’t true, because I know I’m ruining my editor’s life.”

Before embarking on “Reply All,” Lewis was writing a book on her struggles with depression. She says that project burned her out, and so in 2006, she took up stand-up comedy to take her mind off the book.

Lewis says writing jokes was a cinch, but she didn’t like the late-night schedule that stand-up performances required. So with comedic material and no outlet, Lewis started doodling stick figures paired with a punchline and posted them to a blog.

“My drawing was terrible,” Lewis says. “I did not know what I was doing.”

She worked with an editor at The Washington Post on her drawing skills. And in 2011, the newspaper picked up “Reply All” for syndication. It appears in newspapers and magazines across the country.

Often she’ll get letters from people arguing whether they agree with one of Lewis’ “Reply All” characters. Or people will write and tell her how much they relate to
the comic.

“Sometimes they tell me that I must have a video camera in their living room because I seem to be hearing and reporting on their conversations,” Lewis says. “That’s always funny to me.” 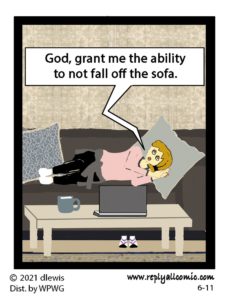 Lewis grew up in Baltimore. She says her family includes both Jews and Christians, and religion is a constant topic of discussion.

“It’s not just something that we were labeled with at birth, and then that’s it,” Lewis says. “We have a very diverse fabric of religion in our extended family. And so religion is a very alive topic. I’m enjoying the renewed exploration of religion as my nieces and nephew discover their own relationships with God and Judaism.”

Lewis is an introspective person, so is “Reply All” a deep commentary on modern day existence? She says no.

“It’s just a comic strip. It’s just a joke. So if you don’t get it, don’t worry, because there’s another one coming at you tomorrow.”

But Lewis does believe people can draw a life lesson from her own story.

“Originally, I could not draw even a stick figure. But over the last 10 years, I learned how to draw. And now I would say my art style is colorful and kind of clunky, but also cute.”

You Should Know… Rachael Wilks-McCann