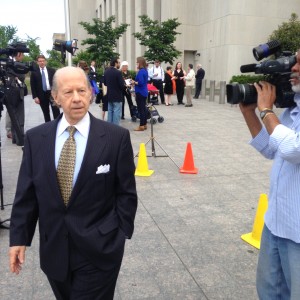 Halfway through the sentencing hearing today for Rabbi Barry Freundel, convicted in February of 52 counts of voyeurism for secretly videotaping women dressing and undressing in the National Capital Mikvah, a Jewish ritual bath, Rabbi Matthew Hoffman of New York City urged leniency for his friend and former colleague.

“God dispenses the justice,” the rabbi told Judge Geoffrey Alprin of the D.C. Superior Court. “Only he knows all the facts.”

But Alprin, a senior judge, had apparently heard all the facts he needed, sentencing Freundel to six and a half years in federal prison for his crimes – 45 days, he said, for each of the 52 named victims in the government’s criminal information.

“The defendant is not all bad,” said Alprin from the bench. “There is another side of him” beside his crimes, as reflected by many letters of support and five character witnesses who took the stand during the four hour-long hearing today.

Hoffman recalled how Freundel had once persuaded a troubled Barnard College student not to commit suicide, when no one else could reach her, and he noted that, “unlike other rabbis, he didn’t keep office hours. Except on Shabbat, you could call him at 11pm or 2 at night with questions.”

A former congregant of his, Carol Cowan, said Freundel had become a changed man since his arrest. “He is more sensitive, more considerate, more grateful, and learning humility. He’s the Barry I knew, but better.”

Freundel made a similar argument to the judge, apologizing, for the first time in open court, to the victims for his “shameful sickness,” for “undermining the authority of rabbis, who are supposed to help people with their questions,” for defiling “a ritual of purity,” and vowing never again to take advantage of “vulnerable” people.

Freundel ended by pleading, practically begging, that the judge allow him to resume teaching, in order that he could “find some good in this tragedy” and “preserve some shred of my humanity.”

Such letters and statements do “affect the sentence, but do not excuse the conduct,” said Alprin. Freundel’s “gross violation of trust and abuse of power,” he said, demands a “significant response by the secular authorities.”

Alprin’s six year sentence fell short of the 17 years of confinement Assistant U.S. Attorney Amy Zubrensky had recommended in her sentencing brief and in court, and yet it seemed to catch Freundel’s defense attorney, Jeffrey Harris, of Rubin Winston, Diercks, Harris & Cooke LLP, off guard. Before the judge could even pronounce the sentence, when he had merely said the words, “I sentence you, at each count…,” six U.S. marshals swarmed the defense table and encircled Freundel, who had dressed in patriotic red tie, white dress shirt and blue suit for the hearing.

Now he will spend the next 2,340 days wearing orange, the color of a prison jumpsuit, a result favored by the nearly 30 victims who wore orange in the courtroom to signal their preferred sentence to the court.

When Harris requested a three-month delay until Freundel had to report to the U.S. Bureau of Prisons, Alprin shot the request down, clearly annoyed at the suggestion. “Your client has had plenty of time to prepare for today,” the judge said. Freundel was ordered to report to prison immediately, just as Erev Shabbat was descending.

Freudel’s attorney, speaking to WJW on the steps of the courthouse immediately after the verdict, vowed to appeal, arguing that the judge had issued an illegal sentence by sentencing the rabbi consecutively, on each of the 52 counts, as opposed to concurrently. (The maximum sentence for each count of misdemeanor voyeurism under D.C. law is one year of incarceration and a $2,500 fine.)

Alprin’s decision clearly pleased the majority of victims, nearly 50 of whom packed the second floor courtroom to watch the proceedings and deliver victim impact statements. Some had lobbied for as little as one year of prison, others for the 17 years that the government was seeking. Many hugged each other and smiled as they exited the courtroom.

“Despite the power you lorded over us, we are better Jews than you,” said another.

One victim was more nuanced in her reaction.

“There’s victory, but a lot of sadness,” said the woman, who preferred not to give her name, as she stood with her husband on the front steps of the courthouse. “He was our rabbi. I mourn the loss of someone who could have made a difference.”

When Freundel was taken into custody by the marshals, he was not placed in handcuffs. That same victim felt an unexpected sense of relief at the judge’s gesture. “I wanted him punished, but I didn’t want to see him degraded.”

With the light behind her fading and aware that Shabbat was coming, she added: “I’m Jewish, and he’s still a person.”