Yes, Albert Einstein was a genius, probably the outstanding thinker of the 20th century, possessing one of the greatest minds in human history. But he also was a human being, who, as we all do, had to make decisions unscientifically without adequate information.

He was a pacifist living in a country that glorified the war it was fighting. He loved music and the process of thinking abstractly in a place isolated from human contact. He became aware of his Jewish heritage.

And he was a man who liked women.

It is those sides to the Jewish genius that emerge from this book that concentrates on the four years during World War I when his General Theory of Relativity was born.

Although he grew up in Germany, Einstein had been living in Switzerland since the age of 15. Walter Nernst, a chemist, and Max Planck, a theoretical physicist, arranged for Einstein to move to Berlin to become a member of the Prussian Academy of Sciences. He would receive a salary from the still-to-be-founded Kaiser Wilhelm Institute of Physics.

The physicist did not immediately accept their offer. But there were two aspects of the job that appealed to him, writes author and German physicist Thomas De Padova. In Switzerland, he had to teach to earn his living; his post in Berlin required no classroom time.

In addition, his cousin Elsa Lowenthal lived in Berlin. “Three effusive letters to his cousin within two weeks bear significant testimony that it was not just for the sake of science that Einstein wanted to move to Berlin,” notes De Padova in this well-researched book.

Although he was married with two children, Einstein left his wife in Zurich to care for their sick child. Upon his arrival, he began seeing his lover, cousin Elsa.

Years later, he finally got a divorce in order to marry Elsa. But, apparently, he wasn’t sure whether he wanted to marry Elsa, 42, or her daughter Lisa, half her age. (He chose Elsa.)

Einstein “was famous in Berlin as a Don Juan and was known to have swung in his love affairs from mother to daughter, occasionally also the other way around,” the author writes.

His romantic dalliances aside, it was his pacifism that alienated him from Germany — and German nationalists from him — during the war. There was a “strong military presence in Berlin,” which Einstein hated.

But it was the war itself that enraged him. “Europe in her insanity has started something unbelievable,” Einstein wrote to a colleague. “In such a time one sees to what a sad bestial race man belongs.”

Einstein, however, was not a radical pacifist, writes the author. Had he been, he would have either given up his scientific research or left Berlin, for whatever he discovered might be of use to the German war machine. Pacifism was important to him, but having decided to stay in Berlin, he had “to live with numerous contradictions and choose between different evils. He was not willing to substantially restrict his scientific curiosity, his own life interests, nor did he. 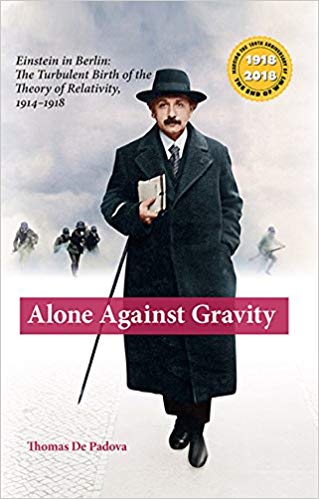 Although Einstein grew up in a secular family, he suffered discrimination and hostility as a Jewish child. When he moved to Zurich as a teen, he “was not aware of his Judaism.” That changed after he moved to Berlin and saw religious Polish Jews living in a ghetto in Berlin. They suffered derision not only from Christians but German Jews as well, whose self-esteem was “subverted,” writes the author. “At times, the result was self-hatred.”

Einstein believed that “having Jewish roots meant being part of a community of fate,” the author notes.
In addition to physics, the great physicist was enthralled with music. He loved Mozart and Bach and would walk through the city with his violin case, available to make music with his fellow scientists.

But the most fascinating aspect of his character was the way he thought and related to the process of thinking.

Einstein could think anywhere. “Einstein said about himself that he loved thinking as an aim in itself, just like music. The driving force of scientific thinking was not an external aim one aspired to, but the joy of thinking.”

He was intellectually flexible, even when it came to his own scientific breakthroughs.

“His curiosity,” the author writes, “drove him not just forward from one thought to another, but also from previous theorems to their opposite standpoints. … He turned this freedom of thought, a mocker of authority, against his own ideas.”

He enjoyed asking simple questions, seeing problems in places his fellow scientists saw nothing and “subsequently mapping out the big theories that fell beyond their scope.”

His approach to scientific research worked. His theory of gravity, the author claims, was “the greatest individual achievement in the history of modern science.”

For you physics buffs, there’s much in the book for you to ponder; for me, it was Einstein the man who stole the show.