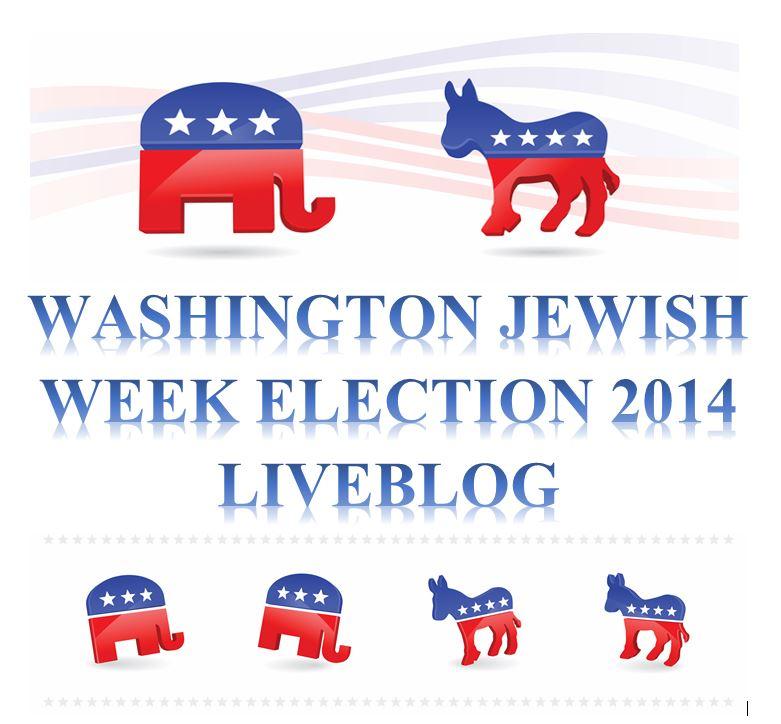 12:54 p.m. In addition to having their party win the control of the Senate tonight, Republican Jews are celebrating the victory of New York State Sen. Lee Zeldin, who defeated incumbent Rep. Tim Bishop (D) in New York’s 1st Congressional District. Compared to most other Jewish Republicans, Zeldin had the best chance at victory. Zeldin may replace former Majority Leader Eric Cantor (R-Va.) as the House of Representative’s only Jewish Republican, but could be joined by California’s 33rd Congressional District candidate Elan Carr after the West Coast’s results come in later tonight.

12:12 a.m. [BREAKING]: In a surprise upset, Lt. Gov. Anthony Brown was beaten by Republican Larry Hogan to become the next Governor of Maryland. According to Politico, Hogan is leading by 52 to 46 percent with 88 percent of precincts reported.

According to our reporters at Hogan’s victory party, Hogan’s family is on the stage awaiting his arrival.

12:00 a.m.: National Jewish Democratic Council responded to the GOP’s Senate victories in a press release a few minutes ago.

Washington, D.C. – The National Jewish Democratic Council celebrates yesterday’s election as another affirmation of the blessings of the United States of America.  Still, we are very distressed at the apparent violations of the rights of voters to have access to the polls.  Reports of irregularities on the part of election officials and poll workers abound, especially in states with critical and contentious races.  Voters in Georgia and Connecticut had to contend with problems acknowledged at the state level in directing people to polling places.  Reports from North Carolina, where voters could cast ballots out of precinct until a recent change enacted by the Republican legislature, are that as many as 8 in 10 people showed up at the wrong precinct.  Some of them arrived to locations designated for early voting only to find that they had been shuttered on Election Day.  And some poll workers were demanding photo identification in Wisconsin, Arizona and Missouri, where no such requirement exists.  Alabama residents carrying public housing I.D. were denied ballots even though for many it is the only form of identification they have.

It may be too soon to know how these irregularities impacted the changes in the Senate.  Nevertheless, we hope that Democrats in both houses of Congress will find responsive leadership that will make for a productive 114th session.  In particular, we hope that constructive legislation, judicial and diplomatic nominees and just budgetary considerations will be validated over these next two years.  We expect that the powers and prestige of the President will not be a target of Republicans who are already looking to 2016.

NJDC looks forward to the months ahead to focus on the agenda of concerns for our country – voting rights, civil rights, economic growth and justice, immigration reform, accessible health care and more.  And of course we put support for a safe and secure State of Israel at the forefront of our efforts.

Washington, D.C. (November 4, 2014) — The RJC applauds the Republicans who won today, taking back the majority in the U.S. Senate and expanding the GOP’s majority in the U.S. House of Representatives. The results today demonstrate clearly that the American people rejected Pres. Obama’s failed policies and chose a new direction forward for our country.

The Republican-led 114th Congress will offer alternatives to the policies of the Obama administration and pursue critical priorities, including enhanced sanctions to prevent a nuclear Iran, economic reforms that will encourage job creation and put us back on a path of growth and prosperity for American families, as well as standing up to the undisguised hostility of the Obama administration against Israel and Prime Minister Netanyahu and rebuilding our essential relationship with Israel.

We are at a pivotal moment, both domestically and internationally. The President’s low job approval ratings, coupled with the voters’ repudiation of Democrats and their policies across the country in this election, signal that the country is looking for leadership — and the Republican-led Congress will provide it.

The Republican Jewish Coalition played an important role in today’s victory. Our members contributed and raised millions of dollars for campaigns around the country. The RJC PAC made significant contributions to critical races. And our grassroots events energized our members to participate in get-out-the-vote efforts. We are proud of the terrific men and women of the RJC who helped make a difference for the GOP in this important election year.

The Republican Jewish Coalition played an important role in today’s victory. Our members contributed and raised millions of dollars for campaigns around the country. The RJC PAC made significant contributions to critical races. And our grassroots events energized our members to participate in get-out-the-vote efforts. We are proud of the terrific men and women of the RJC who helped make a difference for the GOP in this important election year.

11:35 p.m.: [BREAKING] AP and CNN are projecting that the GOP has reached it’s goal of gaining six Senate seats and will be in the majority come January.

I know that people are concerned about taxes. When we cut taxes on the federal level, what does that mean to highways and bridges, tuition freeze? Somebody’s going to have to pay,” Cummings said. “I can understand why O’Malley and Brown had to do what they did with regard to taxes and I thought it was a rather bold move but the fact is that the choice is you lead and you get things done or you cut services and cut infrastructure and cut colleges and you end up with a state in bad shape. And so it’s tough it’s tough, but that’s what leadership is all about you gotta stand up for what you believe in and hope the people will follow.”     Source: Marc Shapiro, senior reporter at Baltimore Jewish Times

10:33 p.m. Updates from the ground: Maryland Governor Race: Hogan picks up Garrett County and is ahead 52 to 47 percent, with 43 percent of precincts reporting. Unlike in Virginia, where polls closed early, Maryland’s polls closed at 8 p.m. so it still may be a while until results come in from majority Democratic areas.

10:24 p.m.: The Associated Press is calling the Florida gubernatorial race for Republican Gov. Rick Scott. Many thought former Gov. Charlie Crist had a good chance and they were neck and neck in early results. Crist requested that poll closing times be extended, something that usually helps Democrats, but it was rejected by a Florida judge. Still, most thought the race would go longer.

9:51 p.m.: Update from the ground:  With 27 percent of precincts reporting, Larry Hogan, the Republican, has taken the lead in Maryland gubernatorial race. Hogan leads 51 to 47 percent. Still waiting for results from most precincts in city of Baltimore, which is a Brown stronghold.

Heather Norris, staff writer at the Baltimore Jewish Times reported screaming from the crowd at the Hogan’s victory rally as the numbers were shown.

9:18 p.m. Updates from the ground: In the race for Maryland governor, Lt. Gov. Anthony Brown campaign party in College Park, staffers have corralled the press and are restricting access. This is similar to what the Brown campaign did during the primaries.

Our reporter from at Republican challenger Larry Hogan’s campaign party is reporting that the mood is upbeat that the campaign announced initial returns from rural counties that showed Hogan ahead. However, current tallies show Brown with a sizable lead.

9:33 p.m., Updates from the ground: Marc Shapiro, senior reporter at the Baltimore Jewish Times, reports Maryland Sen. Ben Cardin (D) spoke to a scrum of reporters at Lt. Gov. Anthony Brown’s victory party at Samuel Riggs IV Alumni Center at the University of Maryland in College Park. Here’s some of what Cardin said:

“I think Maryland is well-situated. We find that we are this cyber center, cyber security center of the world. We can build on that, creating more jobs in our state. We have great universities, we have great economic growth in our state, we can build on that. We have a talented workforce. But we still need to make sure that every child has opportunity through good schools so we have to build on better schools for all children in our state but build on the progress we’ve already made. We’ve led on the fight to clean up our environment, the Chesapeake Bay, we gotta build on that. So I think the next governor’s gonna have a full plate, full agenda, building on the progress Maryland has made the great leadership that we have brought in this country build on that so that Maryland can continue to be a place of opportunity for all its citizens.

With that said, the solid lead Gillespie has right now may mean he has a serious chance. We won’t know until we get more from NoVa.

8:04 p.m.: Polls closed in Maryland a few minutes ago and no results have been counted.

Pennsylvania: CNN is now projecting that Democratic gubernatorial challenger Tom Wolf has beaten incumbent Gov. Tom Corbett. Democrats smelled blood and crowded the primary earlier this year for a chance to take on Corbett. Wolf won the primary handily despite Rep. Allyson Schwartz (D-Pa.) of the many Democratic primary contestants.

7:25 p.m.: Most news organization are now calling Kentucky’s Senate race for Majority Leader Mitch McConnell (R) against Democratic challenger Alison Lundergan Grimes. With just over 20 percent of the polls reporting McConnell is winning by 55.56 percent to Grimes’ 41. Recent polls had shown McConnell pulling away from Grimes in recent weeks but still thought the race would be tighter. — Dmitriy Shapiro Political Reporter

6:45 p.m.: The first polls are set to close on the East Coast in less than an hour and as results roll in, we here at the Washington Jewish Week will be live blogging developments as they happen late into the night. The blog will focus on key Senate and House races throughout the country, with an emphasis on Washington, D.C., Maryland, and Virginia.

We will be updating this space often with information sent in from our team of reporters on the ground, so refresh your browser from time to time to see what’s new. We also look forward to your participation so please comment below.