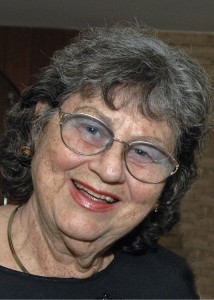 Beloved wife, mother and sister, Estelle R. Turtil of Leisure World, Silver Spring, passed away peacefully on March 26 at 86 years old. Estelle was born Aug. 17, 1928 in the Bronx, N.Y. and was raised with her three younger sisters by her immigrant Jewish parents, Isidore and Anna Heifferman.

She attended George Washington High School and the City College of New York. During the 1940s, she worked in numerous clerical positions in Manhattan and married Joseph Turtil on Jan. 13, 1951. They followed Joe’s engineering career path from New Jersey to Pennsylvania, Arizona and finally, Maryland, raising four sons along the way.

In 1974, Turtil began volunteering for numerous organizations, including the newly founded Jewish Council for the Aging (JCA) in Rockville; subsequently joining the staff and becoming the head bookkeeper. She initiated JCA’s employee pension and tax-deferred plans, and lovingly, but firmly encouraged co-workers to participate.

Having put their sons through college, she retired in 1991 and set out with Joe to tour the United States, Europe, Israel and the Caribbean. Turtil loved listening to her family and friends, for which, along with her smile, she was especially adored. She also enjoyed cooking, reading, roller-skating, dancing, the opera and theatre; and chocolate.

She is survived by her loving husband Joseph; their four sons, Dr. Lawrence Turtil and wife Emily, Steven Turtil, Robert Turtil, Richard Turtil and Stacy Wong; two grandchildren, Alexandra and Jacob; and her three sisters, Laura Heifferman, Sybil Gold, Lillian Roberts. Funeral services were held at the Interfaith Chapel of Leisure World on March 27; followed by funeral services and internment in the Turtil Family Plot, at the Parklawn Cemetery, Rockville. In her memory, charitable contributions are requested be made to the JCA at 12320 Parklawn Drive, Rockville, MD 20852.