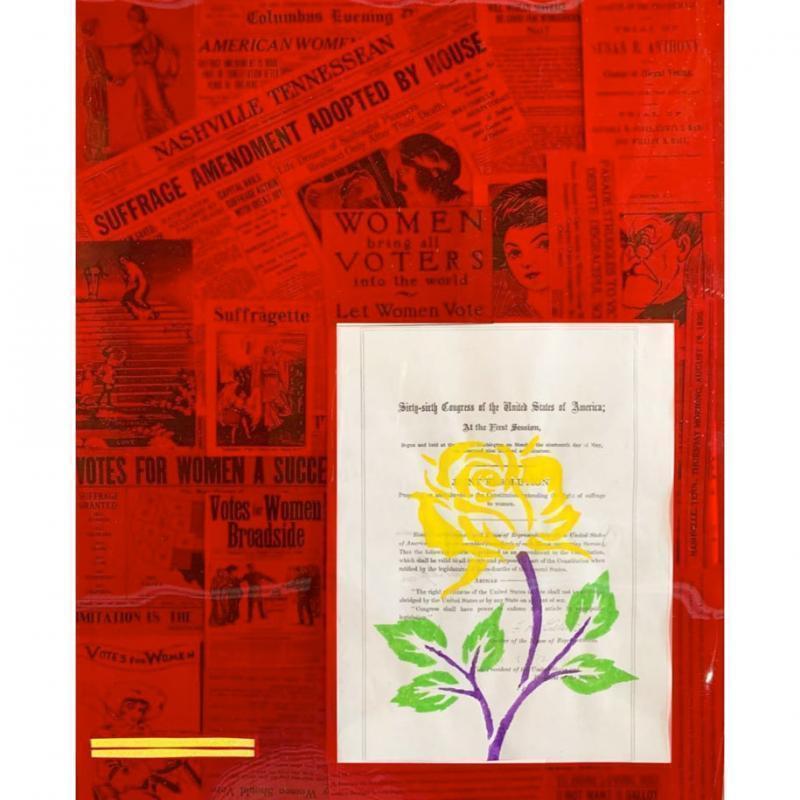 Celebrating the 100-year Anniversary of the 19th Amendment, the 19th Amendment, War of the Roses art exhibit at Del Ray Artisans pays tribute to the rights we enjoy today because of the battle won for women’s right to vote in 1920. This amendment not only gave women the right to vote, but also led the way to more overall equality and social reform. The exhibit features artwork by Del Ray Artisans members and local high school students.

Please join us for the opening reception on Friday, November 6 from 7-9pm. Artist awards will be presented by Elizabeth Bennett-Parker, Vice Mayor of Alexandria, in both the high school category and the members category. Special contributions towards awards provided by the Kiwanis Club of Alexandria, Community Partner McD Mateos, and the curators.

The National American Woman Suffrage Association, formed in 1890, adopted the colors white, golden yellow and purple. Symbolizing purity and hope, golden-yellow banners were used in parades to express the spirit of the movement. Soon, yellow roses became an emblem of the suffrage cause. In contrast, anti-suffragists adopted red roses as their symbol. What ensued was a “War of the Roses.” Are you a “suff” or “antis”? Which color rose would you wear? – yellow or red.

Although Harry T. Burn, the youngest member of the Tennessee state legislature wore a red rose on his lapel, his surprising “yea” vote on August 18, 1920, allowed the passing and ratification of the 19th Amendment, which guaranteed women the right to vote, and moved millions of women closer to equality. “Do the right thing” his mother urged him. Harry stands on the right side of history because he did the “right thing.” Ever wonder what life would be like if Harry Burn had voted ‘nay’ to women’s rights?