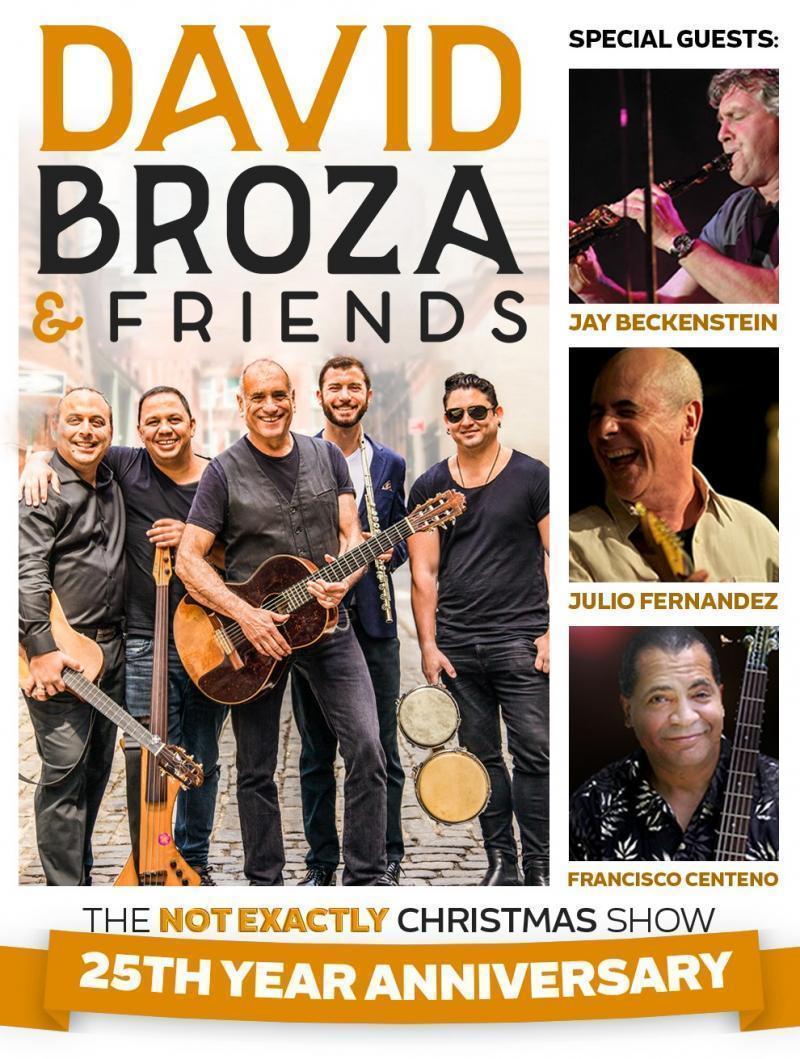 Celebrating 25 years of the “Not Exactly Christmas Show”, internationally renowned Israeli singer-songwriter David Broza brings together his Cuban band plus several special guests for an evening of stunning musicianship and artistry on December 23, 2020 at 8PM (ET). David Broza & Friends will perform live in front of a private audience at the City Winery in New York City, and stream the concert to several thousand fans through partnerships with performing arts venues throughout the USA.

About the “Not Exactly Christmas Show”
David Broza was scheduled to perform in concert in New York on November 4,1995, a date sadly coinciding with the day Israel’s Prime Minister Yitzhak Rabin was assassinated in Tel Aviv. The show was canceled, but the theatre doors remained open for anyone who wanted to come inside. The evening turned into an all-night vigil, drawing mourners from around the NYC region who gathered together to talk, sing, read poetry and mourn. The concert was rescheduled for the only available date: December 24th, 1995, and it became the first “Not Exactly Christmas Show”. Over the years, the venue has changed from Town Hall to 92nd St Y to Symphony Space to the Streicker Center.

This year, the stage will be at the City Winery in New York, while several venues will host the show virtually across the country. Every year is a holiday reunion, as fans and friends come to the sold-out show. The “Not Exactly Christmas Show” features Broza’s repertoire of well-known and best-loved classics. With the addition of surprise guest musicians, you never know who will turn up and what will happen, demonstrating Broza’s versatility across the musical spectrum.

NEW ALBUM
The concert follows the release of Broza’s latest album: EN CASA LIMÓN, produced by Grammy-award winner Javier Limón. Broza’s first endeavor at an all-instrumental guitar album, the album was recorded at the Casa Limón Studios in Madrid, Spain, a “magical place” where some of the world’s greatest guitarists, including Paco de Lucia and Tomatito, recorded their albums.
Eleven of the twelve recordings on the album were played using Paco de Lucia’s guitars. The guitars had not been touched since Paco de Lucia passed away in 2014.
Producer Javier Limón directed the undercurrents of nuevo flamenco to a confluence with Broza’s other musical influences.

About David Broza
From his whirlwind fingerpicking to flamenco percussion and rhythms to a signature rock and roll sound, David Broza’s charismatic and energetic performances have delighted audiences throughout the world. Raised in Israel, Spain and England, Broza has performed worldwide since 1977, when his song “Yihye Tov” first hit the airwaves, promoting a message of peace. David Broza is known for his commitment and dedication to several humanitarian projects, especially a resolution to the Israeli-Palestinian conflict through dialogue, culture, music and tolerance.