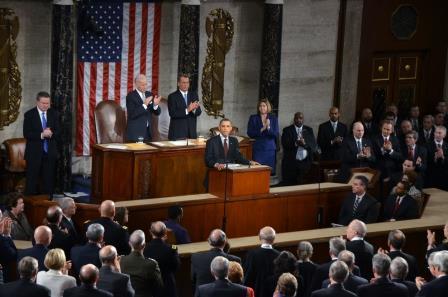 Moments after President Barack Obama finished his State of the Union address Tuesday, members of Congress were already picking apart the speech.

Some, like Tea Party favorite Rep. Steve King, R-Iowa, thought the president was less antagonistic to congressional Republicans than in previous speeches.

But, he said, “He could have pulled all of the Obamacare out of the speech…then I think I could have sat there relaxed,” King said after the address. He said the speech was predictable and that since the president spent a large part of his address extolling the Affordable Care Act, the GOP should continue to focus on its repeal.

Obama told the joint session of Congress that while he wanted to work with Republicans, he would use to executive orders to get around gridlock.

“The question for everyone in this chamber, running through every decision we make this year, is whether we are going to help or hinder this progress,” Obama said. “For several years now, this town has been consumed by a rancorous argument over the proper size of the federal government… When our differences shut down or threaten the full faith and credit of the United States – then we are not doing right by the American people.”

“I thought the speech was resolute,” she told the Washington Jewish Week. “I thought it was visionary; I thought it was clear; and that it really struck the right balance between reaching out his hand to the Republicans and very clearly telling them, ‘Look, a time for intransigence and obstructionism is over.’”

Compared to employment and the economy, the president spent little time on foreign policy. He said that his administration’s diplomacy has succeeded in launching an international effort to dismantle Syria’s chemical weapons and initiating the Joint Plan of Action with Iran to roll back the threat of its nuclear weapons program.

“As we gather here tonight, Iran has begun to eliminate its stockpile of higher levels of enriched uranium. It is not installing advanced centrifuges. Unprecedented inspections help the world verify, every day, that Iran is not building a bomb,” Obama said.

He tried to put to rest the overwhelming distrust among Americans about whether Iran intends to be forthcoming about its nuclear program. He said that trust will not be an element of any long-term agreement with Iran. “Any deal we agree to must be based on verifiable action that convinces us and the international community that Iran is not building a nuclear bomb,” he said, adding,

“If John F. Kennedy and Ronald Reagan could negotiate with the Soviet Union, then surely a strong and confident America can negotiate with less powerful adversaries today.”

Rep. Ileana Ros-Lehtinen, R-Fla., did not share the president’s optimism, telling WJW that the testimony she heard from Iran experts earlier in the day did not paint the same picture.

“They said: ‘You know, we can call it a success if that makes us feel better, but it is not. It’s a very weak deal,’” Ros-Lehtinen said of the West’s agreement with Iran. “It’s a very low standard.”

Rep. Dana Rohrabacher, R-Calif., was also critical of the interim agreement with Iran. “It was wishful thinking at best and it’s a rotten agreement at worst,” he said. “We are giving up what we are doing right now and they are giving up not doing something in the future. In other words they aren’t giving up anything and we’re giving up something.”

Applause in the chamber predictably followed party lines. Yet when president Obama said that he would veto the Menendez-Kirk bill – which calls for new sanctions on Iran after the JPA expires – if the Senate passed it, there was little applause from either side of the aisle.

Asked about the president’s position against Menendez-Kirk, Connecticut Sen. Richard Blumenthal, one of the Democratic co-sponsors of the bill, said that even though he supports the president’s efforts at diplomacy, he still maintains that the Menendez-Kirk bill will not stand in the way of diplomacy as the administration has suggested.

“My conviction is that the sanctions bill expresses the view that tougher sanctions will be needed if the talks fail, and that a vote is unnecessary as long as the progress in the negotiations is meaningful and visible,” Blumenthal said. “We can delay a vote until the negotiations no longer are producing visible and meaningful progress, and I think the president should view us as strengthening his hand rather than detracting from his effort.”

By far the shortest part of the president’s speech was the single sentence on the Israel-Palestine peace process.

“As we speak, American diplomacy is supporting Israelis and Palestinians as they engage in difficult but necessary talks to end the conflict there: to achieve dignity and an independent state for Palestinians, and lasting peace and security for the state of Israel — a Jewish state that knows America will always be at their side,” Obama said.

The significance of the president’s use of the phrase “Jewish state” was not lost on the lawmakers. Israel demands that the Palestinians recognize it as a Jewish state, and the term signaled to Israel’s many supporters in Congress that the president saw eye to eye with them.

“I think it’s the substance that matters and he was very clear in terms of his determination to achieve peace,” Rep. Sander Levin, D-Mich., said, “But with Israel’s security is absolutely essential, you don’t have to make a long speech to be clear where you stand.”

Rohrabacher, who visited Israel where he met with Israeli security personnel, was unconvinced.

“We met with a Palestinian negotiator and our conversation confirmed for us that the Palestinians are not serious about reaching an agreement because they are unwilling to commit to an agreement with Israel that does not include their right to return millions of people to the pre-1967 borders,” Rohrabacher said, referring to the Palestinian demand for a right of return. “Unless they can do that, they are not serious and that would destroy Israel.”

Levin wouldn’t say what he thought the chances for the success of negotiations between Israel and the Palestinians were, but said at least they’re trying.

“That’s exactly what should happen,” Levin said. “Because someday, the issues will be worked out and Israel’s security will be absolutely sustained.”