Grocery bills are skyrocketing. Housing costs are rising. High oil prices mean that heating costs are expected to soar as winter begins. Plus, federal government aid programs, such as free food distributions for families with children regardless of income, that were enacted during the height of the pandemic are now coming to an end.

For those who are already struggling to make ends meet, it is a particularly difficult time.

“We have indeed seen an uptick in applications for food assistance due mainly to the increase in food prices couples with the end of the USDA Child Nutrition Program food boxes which were distributed during the COVID emergency,” said Stephanie Savir, director of operations at Yad Yehuda of Greater Washington. The organization runs the Capital Kosher Food Pantry and a “Tomchei Shabbos” program that provides gift cards to people in need to Shalom Kosher supermarket so they can buy food for Shabbat and Jewish holidays.

But, Savir continued, “with food costs up 15-30% nationwide, the impact is that our Tomchei Shabbos clients can’t get as much food using the funds on the gift cards as they did before inflation kicked in.”

There’s no question that people have been squeezed financially in recent months, said Robert Barbera, director of Johns Hopkins University Center for Financial Economics and an Economics Department fellow, but he noted that the cause cannot be attributed to a single factor.

For starters, he explained, when the federal government sent Americans checks during the COVID-19 pandemic to ease financial losses and encourage spending, people were homebound. So they didn’t use the funds to pay for services like haircuts or a movie.

Instead, they purchased goods like new appliances or big-box store items, creating big demand at a time when factory workers, like many people worldwide, feared going to work. This created a “big pop for prices,” he explained.

Add to that Russia’s unprovoked invasion of Ukraine, which has affected global grain supplies and a lessening of heating oil to much of Europe. He noted that energy prices are still up 17.6% from 2021 and food is up 10.9% year over year.

Lastly, said Barbera, the data used by the U.S. Bureau of Labor Statistics’ Consumer Price Index (CPI) to calculate rental rates includes what homeowners would charge themselves to rent their own residence, making it what the professor calls a fictitious number.

The costs for “shelter” rose 0.8% from September to October, which the CPI said is the largest monthly increase in that index since August 1990. Overall, the costs for shelter have risen nearly 7% from October 2021 to October 2022.

According to Gil Preuss, CEO of The Jewish Federation of Greater Washington, the increased need for financial aid began even before the current rise of inflation, which has only made things worse.

“The COVID-19 pandemic exponentially exacerbated economic insecurity throughout Jewish Greater Washington, and we continue to see these impacts on families and individuals today,” he said. “In response to this growing crisis, the Jewish Federation of Greater Washington, in partnership with JSSA, Jewish Social Service Agency, and a network of community organizational representatives, established the Jewish Community Support Line to streamline access to appropriate resources.”

According to the Capital Area Food Bank’s Hunger Report 2022, 33% of metro D.C. residents surveyed earlier this year said they are suffering from food insecurity. Of those facing food insecurity, 48% have children at home, 20% are high- or middle-income adults, and 77% are employed.

“The significance of these data cannot be overstated,” the report stated. “For individuals, uncertain and inadequate access to food can have impacts that include reduced productivity, poorer health, lower educational performance, and many other outcomes that impede quality of life and access to future opportunities. The implications when fully one-third of a region’s population is impacted by hunger, therefore, are profound.”

At least one state has taken steps to ensure that most children will continue to receive free lunches even without help from Washington. Voters in Colorado passed a measure that authorizes free lunch to every public-school student in the state.

It was a move that was praised by Abby J. Leibman, president and CEO of MAZON: A Jewish Response to Hunger, noting that with the federal aid ending and “inflation deepening food insecurity nationwide, millions of children can no longer rely on the basic right of a nutritious school meal — often their only healthy meal all day.”

“At this pivotal moment,” she said, “we urge states nationwide to follow Colorado’s bold example and make universal free school lunches a reality.”

Back at home, Jewish agencies are determined to be there for the community even as their own costs keep rising.

“As much as we’re able to, we won’t let increased prices impact our work,” said Savir. “Our mission is to provide kosher food and financial assistance, with privacy and dignity, to those in our community who require assistance.” 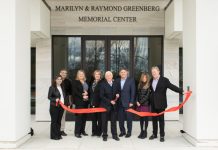 Memorial center ‘a place to grieve and celebrate’