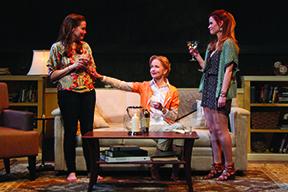 Having it all is at the foundation of playwright Gina Gionfriddo’s 2013 play, Rapture, Blister, Burn, which is on stage at Bethesda’s Round House Theatre through Feb. 22.

It features two women, friends in graduate school, and what happens to their relationship almost two decades later, when one, Catherine (Michelle Six), is a superstar professor and the other, Gwen (Beth Hylton), a stay-at-home mom.

Each woman made her choice. One marrying and starting a family in a small college town where her husband – a beer-drinking, pot-smoking Tim Getman – is a mid-level dean, the other devoting herself to her research, books and teaching on a sexy subject: feminism, violence and pornography.

“The question of the play is whether, at that point in life, have you made the decisions that will dictate the rest of your life, and what happens when you start to question those decisions,” Serotsky says.

Women, particularly since the beginnings of second-wave feminism in the 1960s, have been wrestling with the “having-it-all question.” Not surprisingly, those issues also haunt the millennial generation, as playwright Gionfriddo shows with a 20-year-old student, Avery (brilliant and free-spirit Maggie Erwin), who adds both piquant comic relief and a smartly contemporary voice to the proceedings.

Serotsky, 39, says she is the target demographic for the play, yet, with a spry martini-making elder. Catherine’s mother, Alice (Helen Hedman), the play tears down generational barriers as these four women battle out the question of why it is still so hard to have it all, as feminists once hoped decades earlier.

Rapture, Blister, Burn is not a Jewish play, but Serotsky sees Jewish resonances.

Typically, as associate artistic director at Theater J, where Serotsky most recently directed Yentl last fall, she works outside of her home company one to three times a year directing for other theaters.

“Theaters see it as a benefit to have artistic staff that does sometimes work elsewhere,” says the North Carolina School of the Arts trained director. “It adds prominence to the name and you can have some crosspollination with other theaters around the city. We all learn from each other.”

She didn’t expect that less than two weeks before Round House rehearsals began that Theater J and the firing of its long-time and much-admired artistic director Roth would become above-the-fold news in newspapers and websites around the world.

From Serotsky’s perspective, Roth’s sudden midseason departure from Theater J will not disrupt the current plays. In addition, the artistic team was well along in selecting and scheduling the 2015-16 season, and Serotsky, who was then associate artistic director, had a significant amount of input in that.

“It’s not like we lost the one person who had an opinion,” she says. “Collectively we [the artistic staff] had many strong opinions about what makes a Theater J play and the best way to construct our season. I don’t foresee any significant shifts in terms of the kind of work we do.”

Serotsky’s own background is reflective of many of the provocative identity, political, social and religious issues Theater J deals with. While Serotsky’s father is Jewish, her mother is Catholic; she was not raised in a particularly religious home. She remembers attending a prominent African-American church in Rochester, N.Y., on occasion, where she noted other interfaith families also found an accepting community.

While Serotsky likely will never utter the words, “I identify as Jewish,” she’s spent 6 1/2 years programming and being deeply involved in the nation’s most prominent Jewish theater. Prior to that she was an assistant for the Orthodox Kosher Sex rabbi, Shmuley Boteach.

Yet the Jewish identity question is a tough one for her: “It affected me hugely. If our forbears, who had so many things standing in their way, could make the effort to maintain their faith, then we get to this point in history now where and it is so easy… The question is: Am I letting some legacy down?”

Instead, she finds her spiritual footing in her artistic life. “I’ve been fortunate in my life by being in the theater and the arts where I feel no lack of spirituality. So many of my connection to something bigger have come through what I do [professionally]. It may sound corny, but I’m very fortunate.”