For 20 years, Eric Rosenthal has traveled the world, seeing the worst it has to offer. In 25 countries he has visited institutions where the disabled are housed in inhuman conditions, locked up in crowded wards, often naked and dwelling in their own filth. Since founding Disability Rights International after graduating from Georgetown Law School, the 49-year-old human rig

hts attorney says he has worked to “bring the human rights of people with disabilities to world attention.”

Last week he was in Ukraine, inspecting an orphanage near a town where, by coincidence, his grandmother had been raised. Just returned to his Dupont Circle office, he is dressed in trademark suspenders and is sipping coffee as an antidote to jet lag.

The trip was “unbelievably intense,” he says.

Rosenthal and his colleagues traveled to Ukraine to document and expose the treatment of the disabled in institutions and to train local activists. Disability Rights International is beginning to turn its focus to the institutionalization of children. It has launched the World Children’s Campaign to free children from orphanages, which Rosenthal calls “generators of disability.” 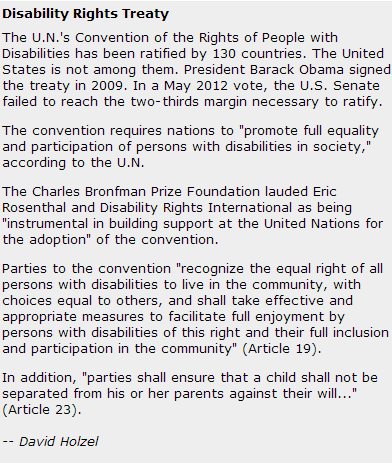 The goal of the campaign is to “bring an end to the practice of putting any child in any institution for any reason,” he says.

The institutional setting was the most disabling factor of all. He saw rooms full of girls rocking back and forth or tearing at their skin with their fingernails. “This self-abuse is a product of emotional neglect,” he says. “You need a parent to form an attachment with.”

In a crib, he saw “a 17-year-old girl who looked like a baby,” with undeveloped arms and legs. “She was essentially left to die.”

“The sad truth is, I’ve been in dozens of countries and seen it time and time again,” he says. “In Ukraine, the substance was the same, the size is what’s different.”

“Eric’s exposes and the international media coverage they have garnered have forced countries to undertake drastic reforms,” says Norman Rosenberg, former executive director of the Bazelon Center for Mental Health, and a mentor of Rosenthal’s. Rosenberg nominated Rosenthal for the Bronfman Prize.

“He’s gone to places where no one else has gone, to countries with pretty repressive regimes. He’s been a warrior to raise the lid and expose the conditions.”

Until he was 6, Eric Rosenthal lived in Glen Echo. That was when his father, a career diplomat, took the family to Africa. Eric lived in Tunisia, Ivory Coast and Niger. Back in the Washington area, he attended junior high at what is now H-B Woodlawn in Arlington. He spent his high school years in Italy.

At the University of Chicago, he thought of becoming a psychiatrist. His grandmother had been diagnosed with manic depression and he wanted to alleviate the suffering of others like her. But he found he wasn’t cut out for science. He did research on schizophrenia, which cooled his enthusiasm for becoming a mental health professional and awoke in him an opposition to institutional settings. He settled on a concentration in politics, economics, rhetoric and law.

He graduated in 1985 with his idealism intact and moved to Israel, intent on saving the world. “I went to Israel hoping to make peace between the Arabs and Israel,” he says.

He made the round of Israel programs: A stint at Kibbutz Revivim in the Negev and studies and work at Livnot U’Lehibanot in Safed. He lived for a time at Netivot Shalom, the Palestinian-Israeli peace village, where he herded sheep on the nearby hills.

It was during his two years in Israel that he decided to become a human rights lawyer. He returned to the Washington area in 1987 and in 1989 entered Georgetown University’s law school. While there, he wrote a paper on the rights of the mentally ill, and discovered that he was practically the first to cover the subject.

And although he continued working with the Israel peace movement on human rights throughout law school, that paper on the mentally ill took him in a new direction. That was confirmed in 1993 when Human Rights Watch asked him to apply for a job as a researcher for the West Bank and Gaza. It would have been his dream job, he says.

At the same time, Rosenthal had received the Echoing Green Fellowship to pursue human rights work for people with mental illness.

He decided that if he didn’t take the Human Rights Watch job, someone else would. But if he didn’t start advocating on behalf of the mentally ill, “no one else was going to do it.”

Rosenthal is the ninth recipient of the annual Bronfman prize. Charles Bronfman, the prize’s namesake, says Rosenthal “exemplifies how one individual can turn values into impact. By tirelessly exposing the horrendous conditions under which some of the most vulnerable among us are institutionalized and forgotten,” Rosenthal is “forcing the world to take notice and make change.”

“He has pushed the issue of institutional segregation of those with disabilities to the forefront, giving new face to the social justice and human rights movements,” says James Wolfensohn, former president of the World Bank, and a member of the international panel of prize judges. “He is living Jewish values to global effect, and inspiring others to take notice and action.”

Rosenthal says there is “a direct connection between what I do and my personal outlook as a Jew.”

A self-described “chavurah kind of guy,” Rosenthal is a member of the Fabrangen participatory community and attends High Holiday services at Hill Havurah. His 11-year-old daughter, Elli, is studying for her bat mitzvah at Temple Sinai.

In Drohobych, he sought out signs of the vanished Jewish community his grandmother once lived in. He found a plaque commemorating those who died in World War II, but which made no mention of the town’s Jews. Following a dirt track into the forest, he discovered a sea of concrete slabs. They were unmarked graves that went “as far as the eye could see.”

“I’ve seen a lot of atrocities in my life,” he says, “but when it’s your own family, seeing that and visiting the orphanages on top of that was overpowering.”

He believes that you can’t kill a person until you first dehumanize him. That’s what happened to his family and the other Jews in the mass graves of Drohobych. And that is what is happening to the children in orphanages and others with disabilities who have been separated from society and left to languish in institutions.

“We as Jews, we know what it’s like when you dehumanize a population,” he says. “We are in a fight against dehumanization. We Jews need to be the first people to speak out when someone is dehumanized and left to die.”