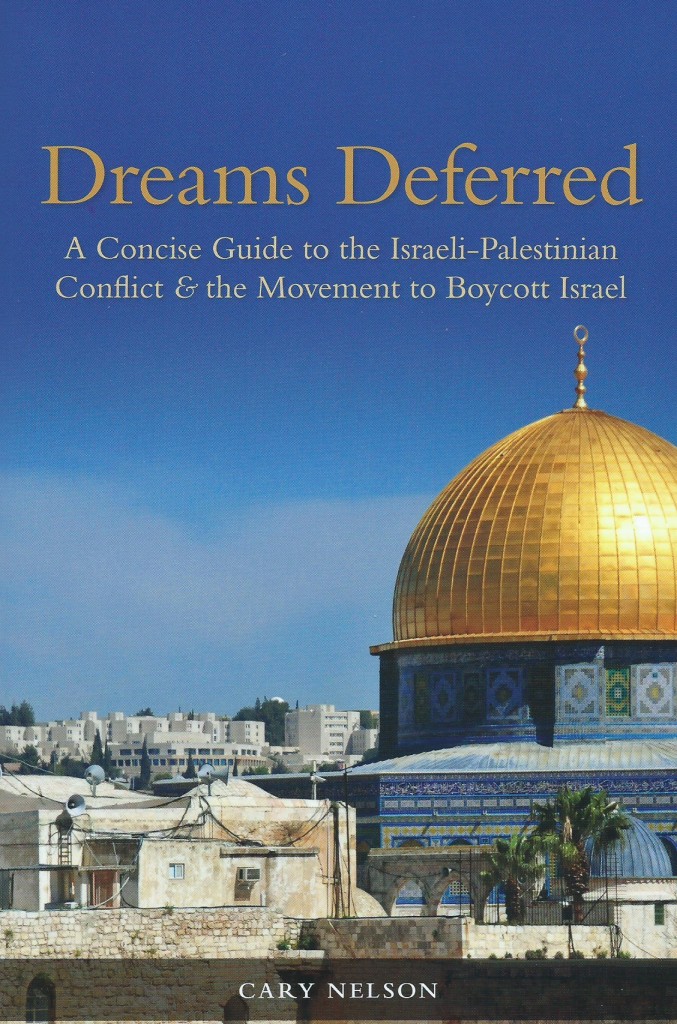 Are you reticent about standing up for Israel because you believe you don’t know enough about the Mideast conflict?

If so, “Dreams Deferred” may be a dream come true.

These short essays are intended to meet the “need for a concise, accessible guide to the key terms and issues” in the Israeli-Palestinian conflict and the Boycott, Divestment and Sanctions (BDS) campaign against Israel.

The essays are grouped alphabetically, with 61 subjects ranging from academic boycotts and anti-imperialism to Hamas and Hezbollah through security barrier and settlements to three chapters about Zionism.

Sometimes authors of these kinds of books tend to gloss over Israel’s mistakes and shortcomings. Then, truth suffers. But not here. For example, Cary Nelson, the author of the “Nakba” (Disaster) chapter — as well as editor of the book and author of many other essays — presents a balanced view of the conflict between Israelis and Palestinians during the Israeli War of Independence. Yes, Irgun and Stern Gang fighters killed some 100 people when they encountered resistance while trying to clear Arab gunmen from Deir Yassin, a village near Jerusalem. And some of those killed were civilians.

Yes, some Arab residents of some Israeli towns were forced out of their homes. But, the numbers were relatively small, and there was no “centralized, coordinated plan to achieve that end.” Most Palestinians left because they were afraid.

There also were war crimes committed by the Arab side, the author notes, including the attack on an unarmed convoy of nurses, doctors, students and others on their way to Hadassah Hospital on Mt. Scopus in Jerusalem. After the vehicles were stopped, the attackers poured gasoline on them and many of the 78 victims were burned to death.

And when Gush Etzion, a cluster of Jewish farming communities south of Jerusalem, fell two days before the State of Israel was officially declared, the Arab fighters massacred 127 soldiers and civilians who had surrendered.
In the same essay, Nelson talks about the importance of recognizing what the Nakba — the  term the Arabs use to refer to the creation of Israel — means to the Palestinians. “Recognition of [the Nakba’s] centrality to Palestinian identity is a prerequisite for the sense of mutual empathy that must undergird the peace process,” he writes. “While there are many exaggerated or unfounded claims put forward by both Israelis and Palestinians, there is a compelling element of truth in each people’s historical narrative. Those core truths must be mutually accepted if peace is to be realized.”

In “BDS: A Brief History,” we learn that many BDS supporters (for example, founder Omar Barghouti and literary critic and author Judith Butler, herself Jewish) advocate the destruction of the Jewish state. But there also are those who push “BDS lite,” asserting that a change in Israel’s policies, not its destruction, is the essence of the movement.

Supporting the Palestinian right of return, which would, in effect, end Israel’s existence through democratic means or violence, negates such claims. But, more to the point, BDS has never supported a change of policy. “If you want policy changes, you advocate for them,” writes Nelson. “You don’t hope for indirect (and unspecified) policy change by boycotting Tel Aviv University or Ahava beauty products.”

Insofar as the Holocaust is concerned, enemies of Israel can be divided into two categories: those who deny that the Holocaust took place (or state that the numbers of murdered Jews are vastly inflated) or those who accept the Shoah but try to use it to delegitimize the Jewish state.

In “Holocaust Inversion,” Robert Wistrich notes that one “particularly obnoxious” version of using the Shoah to attack the Jewish state is to cast Israeli Jews as Nazis and Palestinians as Jews. “Instead of saying the Holocaust didn’t happen, the modern sophisticated denier accepts the event in all its terrible enormity, only to accuse the Jews of trying to profit from it, either in the form of moral blackmail or downright territorial theft,” writes Howard Jacobson.

But it’s not only Arabs who wish the Jewish state ill. Jews’ presence among anti-Zionists helps to insulate that movement from accusations of anti-Semitism, writes Kenneth L. Marcus in the essay “Jewish Anti-Zionists: Three Views.”

Many Jewish leaders and supporters of the BDS movement accept the anti-Israel narrative to “prove their bona fides” as progressives and “their commitment to world redemption,” writes Richard Landes.

But self-hatred also may be at play here. Anti-Semitism has “generated efforts to deny or escape from Jewish origins in environments that attach stigma or inferiority to Jewishness. In such cases, Jewish self-hatred reflects a persecuted group’s identification with its aggressor,” Marcus says.

Why “dreams deferred”? Nelson says this book’s title refers to the two Middle Eastern dreams on hold: the Jews’ dream of living in peace with their neighbors and the Palestinians’ dream of a state.

With the ascendance of radical Islam in the Middle East — in the guise of ISIS, Hezbollah, Hamas and Iran — those dreams may not be capable of realization in the short run.

Readers of the book may come to understand what’s at stake and the serious problems that need to be overcome to reach Mideast peace. And the knowledge they acquire may empower them to take part in the debate about Israel’s future.