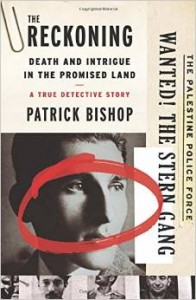 This intriguing book delves into the circumstances surrounding the death of Avraham Stern, head of the notorious militant Stern Gang, in Tel Aviv in February 1942. It casts the event as the culmination of a deadly personal struggle between Stern and the British police officer who killed him, Assistant Superintendent Geoffrey Morton.

Stern, as depicted in the book, was a charismatic but deeply unstable individual. Born in Poland in 1907, his family became refugees at the outbreak of World War I, and he was shuffled from one relative to another, growing up with little adult supervision.

Even as a youth, he was, according to Bishop, “a show-off with a compulsion to perform” who starred in student theatrical productions and wrote moody poetry. Stern arrived in Palestine in 1926 and by 1932, he had been recruited to join the Irgun Zvai Leumi (IZL), a right-wing organization impatient with the moderation urged by the dominant socialists who led the Zionist movement.

Stern’s problem was that he was incapable of sharing center stage with anyone else. He took the nom de guerre “Yair,” named after one of the zealot leaders who led the resistance and mass suicide at Masada, and preached a heady ideology of armed resistance to the British rulers of Palestine. His group’s operations included violent bank snatches and a series of bomb attacks that took the lives of Jewish policemen and innocent bystanders. Stern himself never took part in operations. He was the inspiration – but not the doer.

When World War II began, most Zionist groups suspended hostilities against the British, uniting to face the greater enemy – Nazi Germany. The exception was the Stern Gang. In fact, Stern pursued the strange idea of joining forces with fascist Italy against the British. In return, the Italians would help facilitate the immigration of Jewish refugees from Europe to Palestine. Stern even tried to sell his plan to the Nazis themselves – who were naturally uninterested.

Stern’s position marginalized him within the Zionist movement. Even his former IZL comrades wanted nothing to do with him, and he was reduced to commanding a rump of a couple of hundred militants. But they were still capable of wreaking havoc and in 1941 pulled off the murder of two Jewish police officers in a massive explosion in Yael Street in Tel Aviv. One of them, it later transpired, had been a Haganah agent planted within the ranks of the British police.

The other central protagonist in the book had a very different background. Morton was inspired to join the police after volunteering to keep order in the British General Strike of 1926. This event imbued him with a life-long horror of anarchy and chaos and an almost compulsive belief in law and order. He joined the Palestine Police Force four years later, looking for a way out of the dreary depression which had gripped Britain and for a life of adventure.

The murderous attack on Yael Street placed Stern in the center of Morton’s sights, and he pursued the guerilla leader with obsessive zeal, eventually tracking him down to a safe house in Mizrahi Bet Street in Tel Aviv. Acting on a tip, three British police officers arrived at the apartment and found Stern, half undressed, hiding in a wardrobe. Morton arrived shortly afterward. What happened next is still the subject of dispute. Morton claimed he shot Stern when he tried to escape but one of the other officers on the scene, in testimony given decades later shortly before his death, said that Morton gunned Stern down in cold blood. The author sets forth the different versions in great detail – but does not reach a conclusion on which was true. We will never know.

Stern was more influential in death than in life. Portrayed as a martyr, his murder was used to inspire even more militant opposition to the British. The Stern Gang was renamed Lehi (Freedom Fighters for Israel) and became a highly effective terrorist organization which in 1944 assassinated Lord Moyne, the British minister of state in the Middle East. A Lehi leader, Yitzhak Shamir, went on to become prime minister of Israel. Lehi’s world view, inspired by Stern, which justified the use of deadly force and even terrorism to achieve its goals continues to exert a hold – one might say a growing hold – on Israeli politics today.

This book, drawing on British and Israeli sources, provides a fascinating look at a chapter of Zionist history that few American readers will be familiar with. There are many striking details of life in the yishuv during World War II. Who knew that the Italian Air Force bombed Tel Aviv in 1940, killing 167 people? For facts like these alone, which enrich our understanding of the long struggle for Israel’s independence, the author has provided us with a valuable service.

Alan Elsner is vice president of communications for J Street.