Should U.S. law define anti-Semitism? The House Judiciary Committee on Nov. 7 heard from nine witnesses on the question, including the heads of several Jewish organizations. There was no unanimity.

The committee was looking at the proposed Anti-Semitism Awareness Act, which would add the State Department’s definition of anti-Semitism to Title VI of the 1964 Civil Rights Act.

Supporters of the bill cited the recent increase in anti-Semitic incidents as one reason to pass the bill. Another reason is to protect college students from anti-Semitic harassment.

Bill supporter Jonathan Greenblatt, the national director of the ADL, said the organization had recorded 118 anti-Semitic incidents had occurred in 2017 so far — a 60 percent increase from last year.

“This is not about rumors or rhetoric, this is about hard facts,” he said.

But critics like Barry Trachtenberg, a Jewish studies professor at Wake Forest University in Winston-Salem, N.C., said it was a “factual distortion” to suggest that colleges were “hotbeds” of anti-Semitism. He said that a distinction should be made between anti-Semitism and criticism of Israel, which he said is not based on hatred of Jews and is part of a healthy academic debate.

“Students who engage in speech critical of Israeli policy are largely motivated by their concern for Palestinian human rights,” said Trachtenberg, “They are not motivated by anti-Semitic hate, but its opposite — a desire to end racial and religious discrimination of all kinds.”

Trachtenberg said it would be “ill-advised for Congress to establish an authority on anti-Semitism,” and thought codifying a definition of anti-Semitism could create a slippery slope for free speech in the classroom.

“I think you should trust professors to contend with these issues on campuses,” he said.

Greenblatt responded by saying that many academics are blind to anti-Semitism because they are operating in an “ivory tower.”

“Listen to those of us who work on Main Street,” he said. “All of the major Jewish communal organizations support this legislation.”

The State Department definition of anti-Semitism includes calls for harming or killing Jews, and for making demonizing or stereotypical allegations about Jews. Also considered anti-Semitic are actions to demonize or delegitimize Israel or applying a double standard to it.

Another of the bill’s proponents, Rabbi Abraham Cooper, the Simon Wiesenthal Center’s associate dean, used imagery to make a case that anti-Semitism is rampant on college campuses. Cooper showed the committee a series of drawings posted on Facebook by Michael Chikindas, a professor in Rutgers University’s Department of Food Science. They depict Jews as warmongers, sex traffickers and controllers of the media. 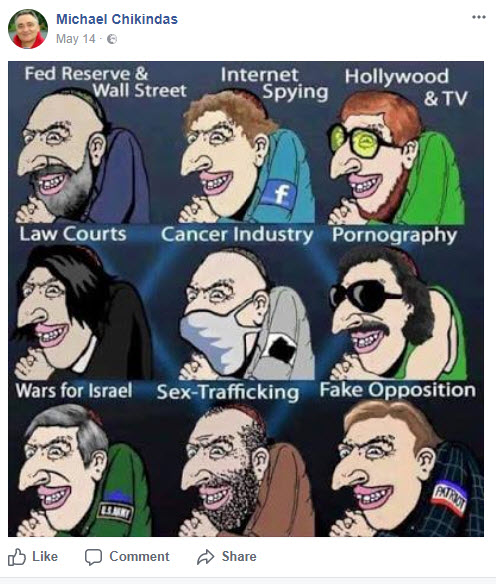 “We have a 19-year old girl who went to Rutgers, who wants to get her degree in food science,” he Cooper said. “This is the guy she’s gonna have to go and sign up for.”

Under Title VI, federally-funded agencies, which include universities, are prohibited from discriminating based on race, color or national origin. These criteria are used by the Department of Education when evaluating claims of harassment on college campuses.

In the past, the department has interpreted Title VI to include a person’s religious background when the discrimination is based on a person’s “shared ancestry or ethnic characteristics.” But Cooper said he wants anti-Semitism included because the designation includes efforts to “demonize” and “delegitimize” Israel — ideas at the core of the boycott, divestment and sanctions movement.

“The lack of an adequate understanding of anti-Semitism has effectively denied Jewish students equal protection under the law, and left them uniquely vulnerable among their peers,” he said.

Judiciary Committee member Rep. Sheila Jackson Lee (D-Texas) appeared torn on whether to support the bill. She held her cell phone to the microphone and played audio from the August Unite to Right rally in Charlottesville — a reminder, she said, that anti-Semitism and other forms of bigotry still exist. But Jackson Lee said the question concerning the bill was how to provide “free space and free speech for our academics,” while making sure students remain safe.

“I would not want to have a professor feel they were hunted if they had several viewpoints that I don’t agree with,” she said. “How would I protect that professor who wants to engage in a deliberately provocative lecture in an academic setting?”

Committee member Rep. Ted Deutch (D-Fla.) said he also did not want to infringe on the free speech rights of students or faculty, but expressed support for the bill.

“College students are trying to find their voice, I could not agree more,” he said. But here’s the question: In all this talk about free speech, which we have to make sure no legislature violates, what’s been missing is the free speech of Jewish students who want to speak out.”