“Be Strong and Of Good Courage: How Israel’s Most Important Leaders Shaped Its Destiny” by Dennis Ross and David Makovsky. New York: Public Affairs, 2019. 303 pages. $30.

When the Palestinians, their fellow Arabs and the Israelis finally are ready to hop aboard the two-state express, Dennis Ross and David Makovsky hope that the metaphorical train will still be in the station. I share their vision. The alternative — a single state for two peoples — is a dismal prospect.

The following paragraph has been edited to correct the statistics.

Diplomat/author Ross and journalist/scholar Makovsky persuasively argue in this well-written book that whether the numbers in the Land of Israel, not counting Gaza, are 65 percent Jewish, 35 percent Arab, as the settlers insist, or 61-39, which most professional demographers say reflects reality” the results of incorporating the West Bank into Israel would be a binational state, with “endless conflict.”

Obviously, such an outcome would be catastrophic.

However, they claim that both sides are not presently ready to make the concessions necessary to arrive at a peace based on two states. On the Palestinian side, compromise is impeded because Hamas controls Gaza and the race to succeed Palestinian President Mahmoud Abbas will cause politicians to become more extreme. In Israel, it’s the settlements and Greater Israel advocates, which are roadblocks to agreement.

Incontrovertibly true. But in my opinion, the main problem now — and since the beginning of the Zionist enterprise some 130 years ago — is the refusal of the Arabs to agree to the existence of a permanent, sovereign Jewish state in what they see as Arab Palestine.

The authors seem to hint at this view when they note that the Palestinians have been “far better at rejection than at acceptance of reality. Had they been open to settling the conflict — if their leaders had been able to say yes to the Clinton parameters in 2000, Ehud Olmert’s plan in 2008 or Barack Obama’s proposal in 2014 — they could have had a state.

“Going back to the Carter administration, the Palestinians missed what the autonomy talks then might have produced,” they write.

In any case, this book is based on the idea that a binational state, with all its downsides, is an increasingly possible outcome, which must be avoided. The authors believe that studying the tough decisions made by four iconic Israeli leaders — David Ben-Gurion, Menachem Begin, Yitzhak Rabin and Ariel Sharon — can “provide a guide for helping Israel’s leaders decide to preserve the country’s Jewish and democratic character in the future.” 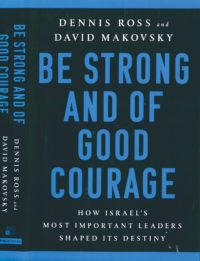 An intriguing idea, if somewhat of a long reach, as every leader must make his or her decisions in the light of current reality.

So, Ross and Makovsky examine Ben-Gurion’s historic decisions to accept the partition of British-ruled Palestine and to declare the small, truncated Jewish territory a state in 1948; Begin’s belief that the Arab population should be given autonomy and eventually offered Israeli or Jordanian citizenship and his support for evacuating the settlements in Sinai; Yitzhak Rabin’s conversion to negotiating with the Palestinians when he realized he had a “responsibility to safeguard the IDF from the consequences of occupation, to seek peace if it was possible … and to ensure that Israel would retain its values and its Jewish-democratic identity”; and Ariel Sharon, the human bulldozer largely responsible for the growth of settlements, who became the architect of unilateral withdrawal from Gaza — and the uprooting of the settlements there — because he feared that Israel might be forced to accept an agreement that would put at risk its security.

Ross and Makovsky also propose concrete steps that Israeli leaders can take now to lay the groundwork for a future two-state peace. The authors recommend no more settlements beyond the security barrier; no more building in Arab parts of eastern Jerusalem; a declaration that Israeli sovereignty east of the barrier will end; and an acceptance of Palestinian economic development in the Dead Sea area.

I’m fine with all their recommendations. But I am a longtime member of the “peace-for-land” club. That would be a hard sell, however, to people who see the entire Land of Israel as nonnegotiable. Prime Minister Benyamin Netanyahu, whose political base would be alienated by such a program, would be committing political suicide were he to adopt those recommendations. Even the Israeli left might be reluctant to back the authors’ position that will pay no dividends for years, if not decades — or, maybe, never.

I’m not very sanguine. As in the case of American politicians who have chosen to ignore this country’s burgeoning debt, which could bring ruin to the United States sometime later this century — or never — democratic politicians usually aren’t enthusiastic about taking action on problems that may or may not pop up in the future.

Unfortunately, the binational state may be closer to reality than we think. And that would mean the end of the Jewish state — the realization of a dream that has been the hope of the Jewish people for 2,000 years.