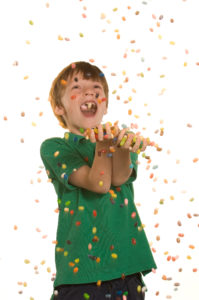 Candy is dandy, but “13-year-old friends of a bar mitzvah boy tend to get competitive” when you give them free reign to start throwing stuff at the guest of honor.

That’s the experience Rabbi Gilah Langner of Kol Ami, a Reconstructionist Jewish community in Northern Virginia, has had with the custom of showering the bar or bat mitzvah with candy during the Torah service.
The custom’s purpose, Langner says, is to “shower them with sweetness” similar to the tradition of putting honey on a Jewish child’s first schoolbook, “so they’ll associate learning with sweetness.”

“We definitely do it at all bar and bat mitzvahs at our shul, and for aufrufs [an aliyah for a groom before his wedding] as well,” says Maharat Ruth Balinsky Friedman, of Ohev Sholom – The National Synagogue, an Orthodox congregation. “We make sure to stick to [gelatin candies], though, for safety and hygiene.”

(In non-Orthodox synagogues, the bridegroom and bride-to-be participate together in the aufruf.)

Throwing sweets at a b’nai mitzvah originated with an ancient practice of throwing fruit on Shavuot and Simchat Torah, according to Rabbi Binyamin Shlomo Hamburger, an Israeli-based expert on the customs of German and Western European Jews.

“Some view [throwing sweets at a groom] as an outgrowth of the custom to throw fruits on Simchat Torah,” he writes in “Shorshei Minhag Ashkenaz,” a collection of essays detailing the heritage of Jews from Eastern and Central Europe. “The emergence of the custom to throw sweets at grooms also led to the practice of throwing candies at a bar mitzvah boy when he is called to the Torah.”

Not everyone is in favor of the custom.

“Some communities frowned upon the practice of throwing candies because it entailed an unnecessary expense, and there were Sephardic rabbis who forbade it because of the physical harm it could cause to people in the synagogue,” Hamburger writes.

Langner says rabbis “usually plead in advance with congregants to use a gentle throwing arm to shower the bar or bat mitzvah with sweetness.”