OK, but who wouldn’t want to work at a place that offered an unlimited amount of free and luxurious snacks? Hannah may have not been too happy with her new advertorial writing gig at GQ magazine, but that array of Sun Chips, Clif Bars and bagels looked amazing. I’d never want to leave. Hannah, though, had to make a decision about whether she should stay or not, knowing that she might get sucked into working at that not-too-shabby office for quite some time. The question is, did she make the right decision in staying?

I’ve realized that with Hannah, we have to take what we can get in terms of positive life and moral decisions, and in “Free Snacks,” she most likely made the right decision to stay with GQ. She was at first delighted by the whole experience. Everyone was loving her ideas, she made two new friends in the advertorial section and, of course, there was an array of free snacks that she took advantage of.

She gave an excited spiel about her new job to Adam, who wasn’t having any luck with acting auditions (didn’t he used to be, like, a woodworker?) but didn’t seem to care too much. It wasn’t until when Hannah found out that her coworkers, one of whom hated her face, had been working there for years and years and seemed to be slowly giving up on actual creative writing. They also happened to have just as much writing success (poetry awards, pieces in The New Yorker) as Hannah beforehand.

This realization that she may be much further from a successful book deal than she thought caused her to put her head in a sink (?), almost quit and eventually succumb to staying at the job, something that Season 1 Hannah would never have considered, despite it providing some sort of decent income. The episode ended in a reversal, with Adam getting an acting gig he didn’t even want, and Hannah caring less about his success and going to sleep depressed. So in other words, she’s still very self-involved, but she’s settling for something realistic. Baby steps!

My favorite scenes of this week’s episode involved Marnie and Ray, a pairing I’m so glad Girls chose to pursue. They’re honestly kind of perfect for each other, even though they seemingly hate each other. In the words of Ray, they both need to someone to eat lunch with.

They’re both lonely, mostly unhappy and great at insulting each other and having arguments. Oh, and there’s also the sex, which they both seemed to have enjoyed. The storyline seems to be going towards the decision of whether or not they will begin a real relationship and make that relationship known to their friends.

The Marnie/Ray relationship is something Shosh most likely won’t be happy about. Lil’ Shosh  has been stalking Ray and is having second thoughts about dumping him, since he’s having a successful career managing a coffee shop, looking hot playing basketball and getting written about in random magazines.

Shosh, who the show made a point to prove that she’s still in college, is already looking to settle down and is tired of her random flings. The most hilarious scene of the night involved she and her not-too-intelligent college boy toy doing the dirty, while Shoshanna was planning their future life together out loud. A new classic to the long list of awkward sex scenes.

Jessa is now working at the baby boutique and is hating life. Surprise, surprise. Also, how did she manage to get the job? Did she make a fake resume?

– So, how much time has passed since last week’s episode? I would say around a month, since Hannah landed a somewhat serious job and Jessa seems to have been working at the shop for a few weeks already.

– This is the second week in a row we’ve seen Ray’s bum and possibly the first time we haven’t seen Hannah naked in a while. Kudos to the show for mixing it up!

– Speaking of Ray, Alex Karpovsky is Jewish in real life, but apparently Ray is a gentile on the show, much to Jessa’s and everyone else’s surprise. At least according to Shoshanna.

– No Caroline this week. I’d like to imagine she’s off rescuing rabid raccoons or something.

– Shosh’s stalking outfit was the star of tonight’s episode though.

– The casting for Hannah’s new “doesn’t have time for you” advertorial boss Janice (Jenna Lyons) was perfect.

– “Did they need someone for a before picture in a makeover article?”

– “He’s just so stupid that I’m worried that our children wouldn’t get into preschool.” Shoshanna also may have wondered whether or not her boy toy could tie his own shoes.

– “Fedoras are worse than genocide.” 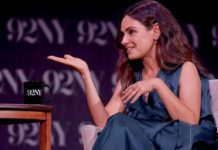